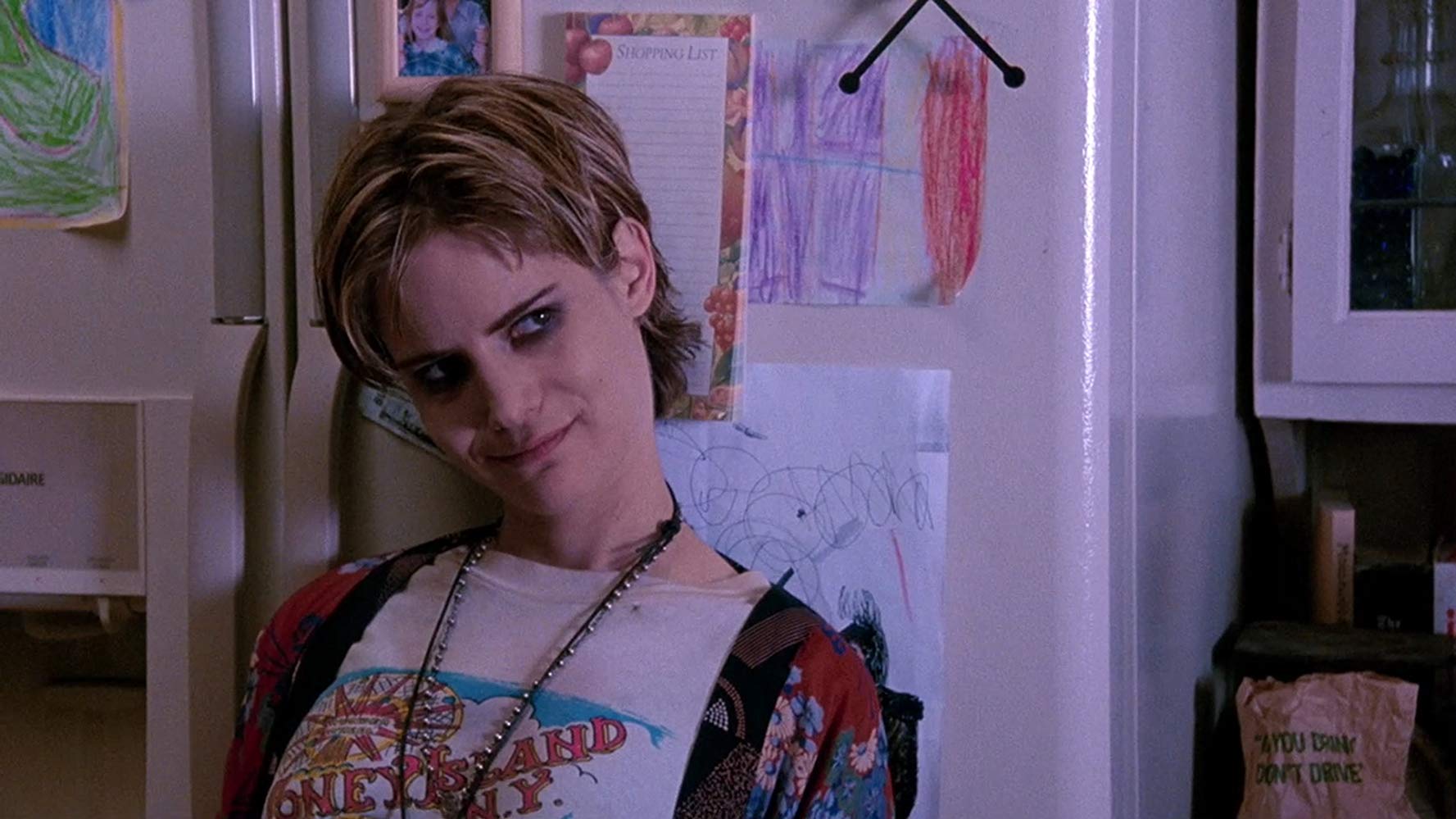 Okay, so, my mother has this friend, “Curly.” Nobody else in the family has ever met Curly, but we love her anyway, because she writes the most insane Christmas letter in the history of the winter holidays—three single-spaced, seven-point-fonted pages of monomaniacal commitment to The Dread Lord Overshare. Not one detail is omitted from Curly’s annual review: carpool-schedule adjustments, subtle shifts in ambient humidity, cavity repair, the circumstances under which her husband left the family and moved into an apartment in a neighboring town…no, seriously! She put that shteez in the Christmas letter—cheerily, as befitted the season; I distinctly recall a handful of smilies after the phrase “couples counseling”—and then she described the apartment. And if you think she didn’t top herself the next year, think again. Let’s just say the word “fistula” figured heavily in the proceedings.

You’ve already read the title of the entry, so you know where I’m going with this, but if Curly’s Christmas letter could take human form, it would clearly take the form of Jennifer Jason Leigh—too real, too much information, horrifying and awesome, candy canes and gangrene, utterly authentic and utterly uncomfortable. And my reaction to Curly and to Leigh is the same: That I kind of wish they could turn it down, or off, just once, but at the same time, I have to admire their dedication. I don’t want to subscribe to The Diverticulitis Gazette, particularly, but Curly keeps sending it out, and I keep reading it. Leigh, same thing; “watch borderline personality decompensate over course of two hours” isn’t on my to-do list anywhere, but I can’t un-know what it looks like now.

Where you score this on The Jennifer Jason Leigh Oh My Hairy God Let It End Scale depends on how you feel about the accent; in my opinion, the Dr. Roosevelt’s Famous Original Sour Balls acting choice actually muffles Leigh somewhat. She gives Dorothy Parker a sodden, exhausted physicality—I’ve never seen a better rendition of the moment when the drunk becomes the hangover, and about an hour into the movie, I start to feel enervated myself.

As a culture, we have a compartmentalized relationship with Dorothy Parker; we celebrate her diamond-hardness, but we don’t want to see the great pressures brought to bear as the diamond comes to be. With that said, Parker is one of Leigh’s less discomfiting roles, but she does have a few too-much moments, partly because she always does, but primarily because she’s often sharing the screen with charisma vacuums like Matthew Broderick and Andrew “Blando Calrissian” McCarthy, who throw her into sharper relief. Even as she’s lolling on the stairs at a New Year’s party, once again interacting with her own head as though it’s the globe of Atlas, you can feel the effort Leigh puts into her lassitude; Broderick just frowns in a standard way and reads his lines with the occasional capital-P pause.

Friendships between adolescent girls can sometimes take on the qualities of romantic obsession—there’s a profound and ridiculous intensity to these relationships, a need to inhabit and be completed, and from the middle of it, you can’t see that it’s bad opera. Leigh gives that to us here, note for note, and it’s a heartbreaking performance that has no business in director Barbet Schroeder’s movie, which is not very good—it’s one of those “damn, bitch crazy” thrillers from the early ‘90s (including but not limited to The Hand That Rocks the Cradle, Poison Ivy, and The Crush), in which women scorned must inevitably morph into highly organized engines of destruction. This bears no resemblance to how people actually behave, although Leigh tries to humanize it, and it’s interesting to watch the effects of that—Leigh disrupts the suspense’s momentum by pulling Bridget Fonda out of the orbit the script designates for her. Hedy Carlson as written is a plot locomotive, not a person, but Leigh doesn’t play her that way. As a result, Fonda can’t always go with the pro-forma line delivery she might prefer; she responds to Leigh in spite of herself. When Allie finds Hedy’s bloody clothes in the sink, Hedy offers her period as the reason; the audience knows she’s lying, and Allison should know it too, but Leigh makes such a convincing cramps face that you’re not entirely convinced it’s untrue, and Fonda is quite clearly torn between acting suspicious, as the script demands, and accepting the monthly bill as paid, which Leigh demands. You can almost hear Barbet Schroeder muttering, “Fine, do what you want.”

If I recall correctly, the contrast between Leigh and everything else in this 1970s-set undercover cop drama didn’t seem quite as stark back in the day as it does now, but then, the film itself didn’t seem as hacky as it does now. We’ve seen it done a thousand times: the cop who plays by his own rules, the fresh-faced rookie roughed up by the hypocrisies of the system, the Howard-Hughesian drug dealer whose isolation has subverted his blah blah blah fishcakes. And let’s not forget The Lieutenant Whose Patience Has Its Limits. Without Leigh, Rush is fertile ground for a drinking game: Sam Elliott phones it in using two tin cans and some dirty string—drink! Gregg Allman confuses “menacing” with “bad clams”—drink!

But Leigh is in it, and when she’s listening to her partner/mentor/lover Jim Raynor (Jason Patric) lecture her, again, some more, about the perils of deep cover, she’s doing the work—feeling afraid, resenting the condescension, taking the leap but looking down. She makes Kristen’s face a dutiful, determined mask and drops her voice to steady it from fear, but her eyes don’t stop moving; she’s thinking she can fake it until she actually feels it. She’s also thinking, “Why don’t I feel it yet?” It opens up a jarring gap, that multi-layered act, because Raynor is one of those Dylan McKay types whose sense of his own broody tragedy informs everything he does and is more tiresome than affecting, and Patric is too limited to get us on his side. (Also, The Beard That Ate Frankie Carbone is about to swallow his head.) There’s probably a pretty good movie in there somewhere, if you recast some roles and cut it down by about 15 minutes; Leigh’s performance just reminds you that that isn’t the movie you’re seeing.

A recently reunited, but not fully reconciled, couple throws an anniversary party, attended by all their neurotic film-industry friends, at which everyone takes Ecstasy. Nightmare! On top of that, the film is written and directed by two actors—Alan Cumming, and Leigh herself—so it sounds like a recipe for bundle-of-nerve-endings flambé, Leigh-style. It’s actually the exception that proves the rule. Leigh’s Sally Nash is maddening, because she’s familiar—she’s a friend of yours, the one you wish would just break up with the guy already if she’s that miserable, and she’s also half of that couple who always fights at dinner parties while everyone else folds and refolds their napkins and waits for the tears to start so that one of them will flee the room, the other will follow, and you can finally talk shit about them. It’s vintage Leigh, so awkward you can’t look at it straight on, and it’s only watchable in this case because Jane Adams’s Clair—a rubber-jointed post-partum mess who’s self-medicating to no positive avail—is so much more uncomfortable that Leigh’s scenes come as a welcome respite. Between Adams wiggling through her blocking all “hih hih hih,” Cumming doing his West-Elm-catalog-sprite thing, and John Benjamin Hickey screaming so hard during the charades scene that the artery in his forehead picked up a SAG card, Leigh is like a drink of cold water. And after #5, she owes us that much…

If you’ve seen it, I trust I need not elaborate. If you haven’t, I recommend it, if only because it is a badge of honor to get through the Van Morrison sequence without pausing the movie to rest and reflect. Or to run into the pillowy embrace of traffic. Anything. Anything to fucking end it. Sadie Flood is so awful to watch, so disordered and busted down, and in the few scenes when she’s not sending the 3:46 Acela full-speed into the side of a mountain, she’s annoying—and Leigh rides that to the end of the line.

Directed by Ulu Grosbard, and written by Leigh’s mother, Barbara Turner, the film itself is irritating, in an under-your-skin way. Sadie, who fancies herself a singer, wants everything her older sister Georgia has: a successful singing career, achieved in spite of a stated lack of ambition on Georgia’s part; a loving husband and a traditional family; the house the two sisters grew up in. From the first scene, it’s on; Georgia is playing to a full arena, Sadie is in the audience, and on Leigh’s face, sisterly pride is facing off against confusion, rage, guilt (because of the rage), and more rage (because of the guilt).

It’s an ugly dance that’s older than dirt and frustrating as hell, the sibling dynamics that don’t change, but it’s brilliant in both casting and execution. Even while wanting to kick Sadie, you still feel for her, because Mare Winningham is just as perfect in the Georgia role as Leigh is in the Sadie one; the round placidity of Winningham’s face makes a nice visual contrast with Leigh’s witchy angles, as well as strongly suggesting a smugness in Georgia—a secret satisfaction in the knowledge that Sadie will never get it together, that Georgia can keep offering Sadie money and never expecting anything better of her, and that, thus enabled and infantilized, Sadie will never threaten her primacy.

Leigh occupies Sadie completely—you can smell her, the sour fug of Marlboro Lights and dirty hair that must attend Sadie’s movements—but manages to let us see what Georgia sees, this off-putting and childish broken-down charmer that can’t be written off. It’s a brilliant job, but I would rather watch Un Chien Andalou a hundred times in a row and then eat the razor they used than sit through it again.