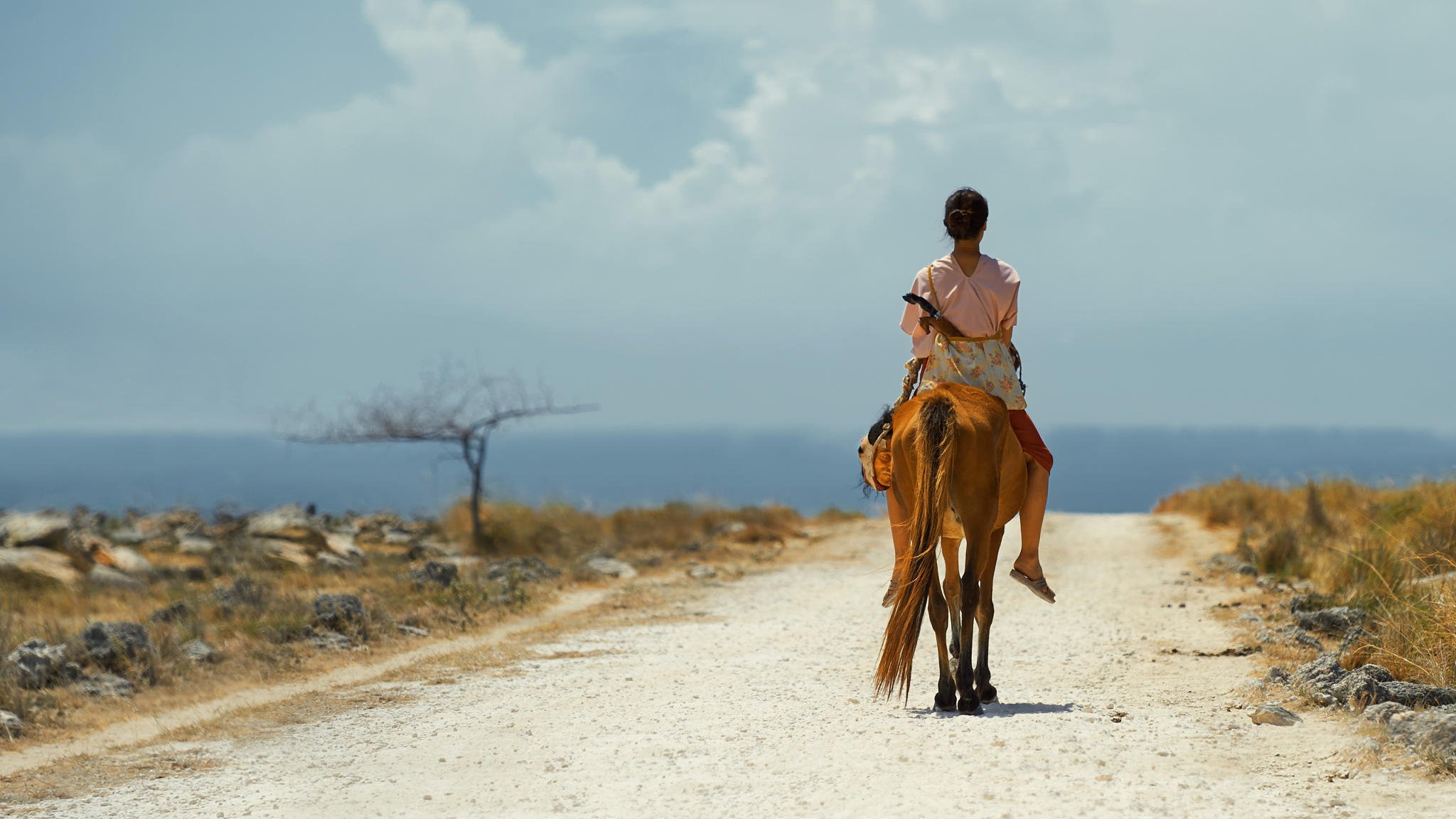 The “four acts” of Marlina the Murderer in Four Acts might as well be called “volumes,” given how closely the structure of Mouly Surya’s neo-western mimics that of Quentin Tarantino’s Kill Bill. Like Tarantino’s bloody two-part opus, Surya’s tale of rape and revenge overflows with stylistic ambitions that could generously be described as revisionist or neo-feminist—a postmodern blend of art-house and genre sensibilities. Variety’s Maggie Lee has even called it “the first Satay Western,” suggesting an Indonesian riff on the spaghetti western. But such a designation helps to belie Surya’s fundamental reliance on a Tarantino-esque approach to the template of the western genre. What unfurls throughout Marlina the Murderer in Four Acts is a routine bit of bloodletting that’s intermittently enlivened by an acute grasp of the impossibilities that abused Indonesian women face in a society predicated on their continued physical and emotional subjugation to men.

The film’s first act begins with Markus (Egy Fedly), a tall and skeletal figure, parking his motorcycle outside Marlina’s (Marsha Timothy) village home, then entering it in order to announce that seven men, including himself, will soon pay her a visit to steal all of her cattle as payment for a debt and, if they have time, rape her. Sitting upright in the corner of Marlina’s living room is a yet-unidentified dead body; cinematographer Yunus Pasolang uses wide-angle framings to foreshadow pending bloodshed, articulating the clock-ticking nightmare of Marlina’s predicament with a succession of steady, well-framed shots. Of course, given the film’s title, there’s no mystery about what’s going to occur. After a poisoned soup wipes out four of the visitors (two left after stealing her cattle), Markus rapes Marlina, who, during the act, mounts Markus so that she can unsheathe a machete and perform an act of coitus decapito. Markus’s severed head in tow, she sets off into town to tell the police of her abuse while trying to evade the vengeance of the two remaining outlaws.

While Surya suffocates her film’s first act in a humorless procession of disgusting male behavior capped by equally wild shows of vengeance, the remaining acts open themselves up to welcome displays of comedic conversations and slapstick altercations. On foot, Marlina happens upon Novi (Dea Panendra), a pregnant woman and chatterbox whose animated expressions run counter to Marlina’s mission-driven stoicism. Later, as Franz (Yoga Pratama) and Ian (Anggun Priambodo), the two surviving cattle thieves, hunt their prey, Marlina finds herself on horseback, slowly trotting over the horizon to the Morricone-evoking score by Yudhi Arfani and Zeke Khaseli. The filmmakers announce Marlina’s consecration as a western antihero with little more than a wink and a nod to the film’s cinematic forbearers.

However, Marlina the Murderer in Four Acts distinguishes itself from its predecessors in its third act, as Marlina recounts being robbed, raped, and her retaliatory acts of self-defense to a police officer. It’s far and away the film’s most effective sequence; relaying the exchange through a series of tightly framed shots, Surya shows that her direction is more emotionally resonant when it’s at its least stylistically affected. Faced with a police officer who fundamentally distrusts what he’s being told, Marlina is made vulnerable to Indonesian law; she’s no longer the vigilante badass riding horseback, but a woman asked to present evidence that she’s been raped in order to be absolved of murder charges. The film’s title takes on new dimensions, as the filmmakers imply that their designation of Marlina as a murderer is in accordance with how law enforcement will view her acts of self-preservation.

In its fourth act, Marlina the Murderer in Four Acts returns to its former track as an ostentatious revenge saga in ways that prove more conventional than daring. As the requisite number of bodies drop in stylish fashion, the only poignant note that’s struck is the relationship between Marlina and Novi. By the film’s conclusion, the bond between the two women is built on their mutual welcoming of life into an Indonesian society that may, even if gradually, be awakening to its dehumanizing treatment of women.