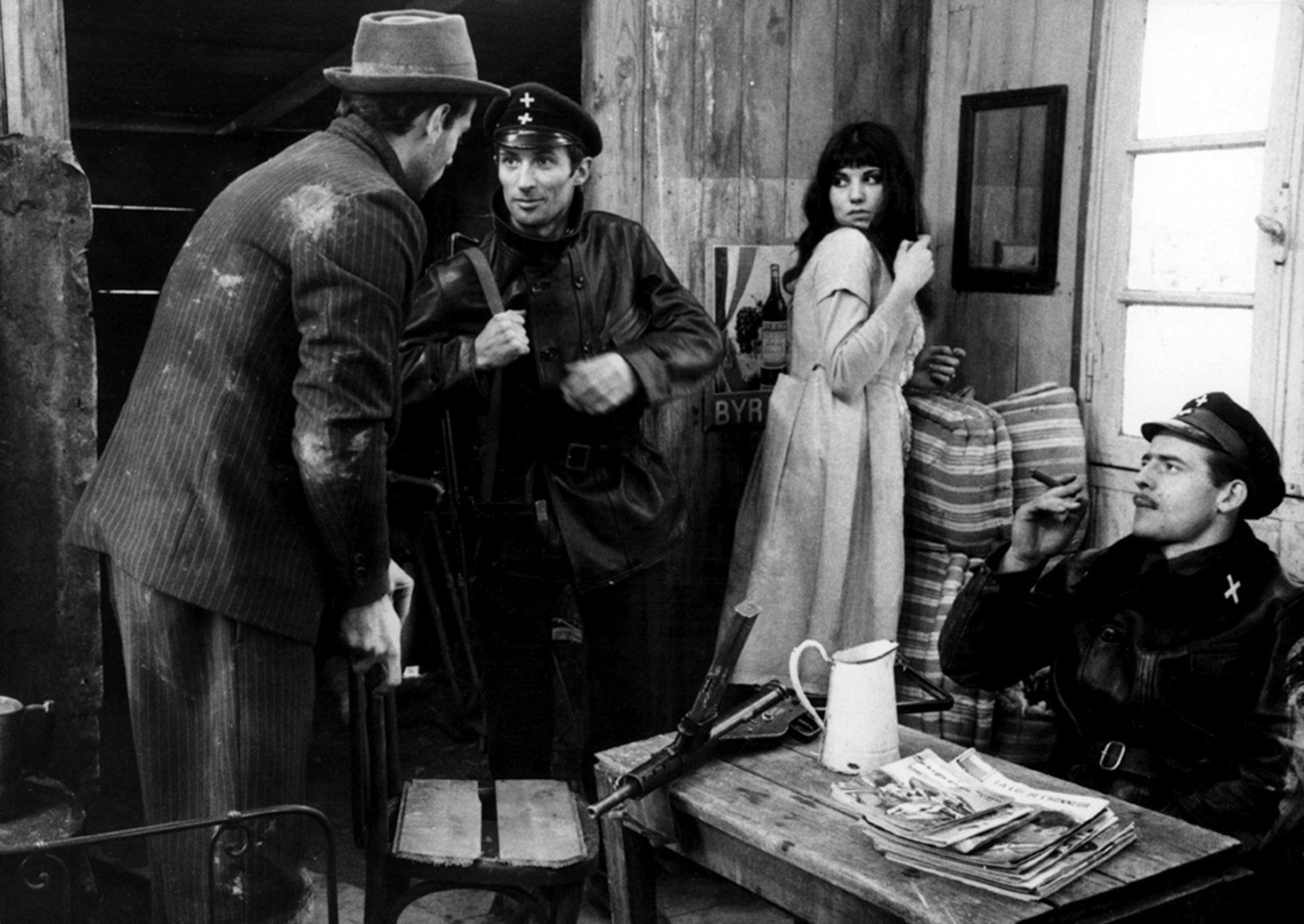 Jean-Luc Godard’s 1963 film Les Carabiniers is a carnivalesque procession of sight gags and consumerist satire—a skewering of the French government’s manipulation of its citizenry that set an early precedent for Godard’s full-on turn to political filmmaking in the late ‘60s. Unlike Contempt, which is also from the same year but beholden to a straightforward narrative, nothing that occurs throughout Les Carabiniers can be taken at face value. This account of two poor and ignorant brothers lured off to war by the promise of riches and urbanity is far from realistic, as Godard structures the film as a series of comic sketches rather than a fully developed dramatic piece.

After military officers come knocking at their farmhouse door, Ulysses (Marino Masé) and Michelangelo (Patrice Moullet) are told that “the king” wants a favor from them. Their wives, Cleopatra (Catherine Ribeiro) and Venus (Geneviève Galéa), encourage them to go off to war, hoping they’ll bring home, among other things, some magazines from the modernized world. The screenplay, co-written by Godard, Jean Gruault, and Roberto Rossellini, treats Ulysses and Michelangelo as if they’re tabula rasas, clueless as to even the fundamentals of civil society or diplomacy. When Michelangelo asks an officer if he can massacre innocent folks while in battle, the deadpan response he receives is emblematic of Godard’s sense that human beings are wholly vulnerable to primal emotions: “Yes, yes. That’s war.”

The brothers’ unquestioning dedication to a cause is the basis of their willfully immoral behavior. Once he’s been given a rifle and a uniform, Michelangelo automatically asks women to undress at gunpoint and participates in executing prisoners. Violence and murder are normalized by the hermetically sealed conditions in which they take place. Without an outside source of critique or perspective—there are, after all, no reporters or media outlets covering these events in the film—pulling a trigger becomes routine for Michelangelo, who innocuously describes his murderous activities in letters home as if he’s learning to play a sport at summer camp.

Indeed, Les Carabiniers transforms the starkest conditions of war and bloodshed into a sort of cinematic game, which reaches its peak when Michelangelo finds himself in a movie theater, seeing films for the first time. Upon viewing the Lumière brothers’ The Arrival of a Train at La Ciotat, he has the same reaction to the film that audiences in 1896 are alleged to have had to it when he braces for impact, believing the train is headed straight for him. Later, as a woman disrobes for a bath on screen, Michelangelo slinks around the theater, trying to gain the optimal vantage point with the hope that he might catch a full glimpse of her in the nude. It’s an almost mathematical gag, as the novice voyeur behaves as if he’s looking through a window into a three-dimensional space instead of onto a flat screen. Finally, once the woman on screen enters the bathtub, Michelangelo blitzes toward the front of the auditorium à la Buster Keaton in Sherlock Jr., hoping to enter the cinematic realm. Instead, he rips through the screen. In Godard’s film, the cinema is ironically the only property in time and space immune to illusion.

Although Les Carabiniers was released in France a year after the end of the Algerian War, the film makes no explicit mention of the war or its outcome. Unlike Alain Resnais’s Muriel or even Godard’s own Le Petit Soldat, both released in 1963 and centering their entire narratives around the French-Algerian conflict, Les Carabiniers opts for surrealist brushstrokes. After Ulysses and Michelangelo return from battle with satchels full of photographs documenting monuments from around the globe, the sequence in which they proclaim each of their stops ventures past absurdity and into complete anarchy, as places, people, and animals—from the Eiffel Tower to Rin Tin Tin—are enumerated with no distinction between them.

Following that, Ulysses and Michelangelo lay out a collection of photographic nudes, which range from magazine spreads of American actresses to Sarah Baartman (also known as the Hottentot Venus). Here we glean the film’s awareness of images that have been used throughout the 19th and 20th centuries to perpetuate colonialist ideals in French culture and beyond. But the specificity of the commentary feels a bit unwieldy. Godard’s point seems to be that the way colonial discourse exists side by side with conversations about pop culture in contemporary France is a testament to the collapsing, for better or worse, of politics and culture into one, malformed category. As the brothers enumerate their photographs for minutes on end, Godard’s camera repeatedly zooms in and out on the characters, adding a vertiginous effect to the barrage of places and names. Rather than play the brothers’ corruption for pathos, Godard transforms their global tour into one prolonged visual gag.

Godard’s penchant for sardonic intertitles recurs throughout the film, cheekily augmenting the fragmented narrative with poetic punctuation marks. Godard saves the best for last: “Dreams are what constitute paradise,” the final intertitle states, though such an oneiric state of misperception can only be occupied, the film suggests, by dead men. Les Carabiniers is perhaps too scattershot in the end to rank among Godard’s greatest works, though its conviction that action, and not idle thought, is the lifeblood of social progress is as palpable here as in any film the director made in the ‘60s.