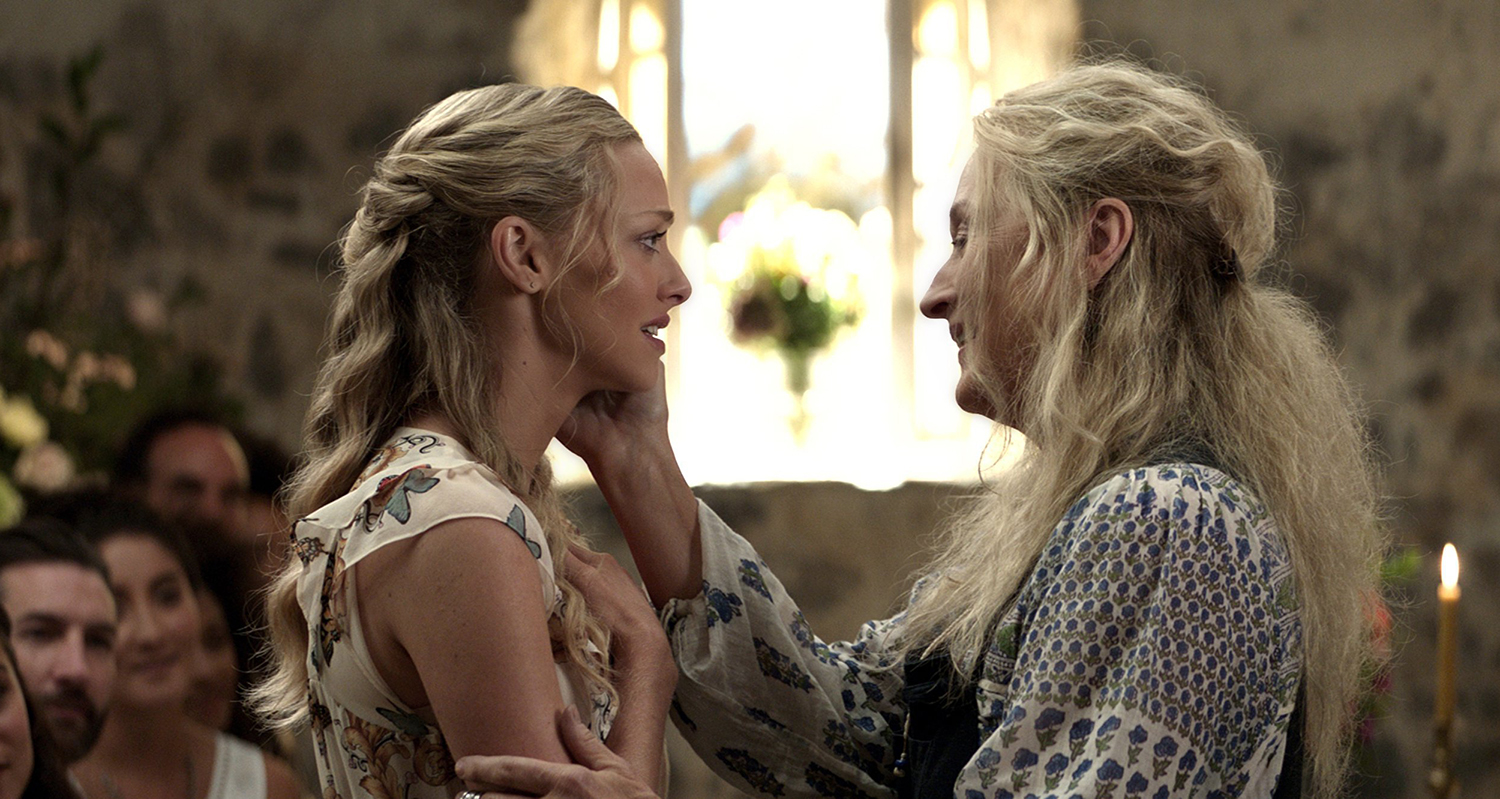 Even by the standards of our current era’s wanton entertainment franchising, Mamma Mia! Here We Go Again is a thoroughly unnecessary sequel to a decade-old film that combined self-conscious acting, dubiously tuneful singing, and cartoonish comedy into an erratic, lifeless musical. It’s all the more surprising, then, to discover that writer-director Ol Parker’s follow-up boasts such confident performances and choreography that it feels as much like a final draft of the 2008 film as a continuation of it.

The story is, thankfully, kept lean. In the present, Sophie (Amanda Seyfried) prepares to reopen her—spoiler ahoy!—late mother Donna’s (Meryl Streep) hotel, fretting over the matter alongside one of her fathers, Sam (Pierce Brosnan), as the other two, Bill (Stellan Skarsgård) and Harry (Colin Firth), are too preoccupied with work to attend the event. Meanwhile, extended flashbacks see young Donna (Lily James) arriving at the Greek island that will become her home and having her fateful trysts with Sam (Jeremy Irvine), Bill (Josh Dylan), and Harry (Hugh Skinner). Each plotline progresses without complication, all the better to make room for the musical performances.

In Phyllida Lloyd’s Mamma Mia!, the musical numbers only periodically synched up with the plot of the film. Here, the music is more organically incorporated into the story, as in “Waterloo” popping on while Donna and Harry go on a date in a Parisian café, and “Knowing Me, Knowing You” playing as Donna rejects Sam upon learning that he has a fiancée. If the choreography and editing in the first film seemed built around concealing the stars’ lack of singing ability, the musical numbers in Here We Go Again feel more expansive and classically conceived. The sequence set to “Waterloo,” for example, builds from Harry’s awkward solo vocals to a massive group sing-along, complete with elaborate choreography that strikes just the right balance between coherent progression and goofily timed sight gags, like each of the young couple’s heads randomly ending up under tableware cloches.

With the exception of Seyfried and James, though, the actors’ singing is frequently buried in the sound mix in order to mask dodgy vocal deliveries. Brosnan’s pitch remains so unwaveringly flat that he recalls Jean Hagen’s haplessly tuneless star in Singin’ in the Rain. Elsewhere, Donna’s backstory is completely redundant, and much of the dialogue, while sharper this time around, serves a purely expositional function. Still, the jokes land more times than not, and Christine Baranski and Julie Walters delight in their characters’ cattiness. The unreservedly lusty wit that Baranski’s Tanya freely displays is especially funny and bracing throughout, as when she spots a handsome older gentleman and hoarsely whispers, “I hope his wife is dead.”

In its frothy charm, Here We Go Again reflects the sensibilities of the band whose music inspired it. ABBA epitomizes the paradox of pop music engineered with factory precision to sound organic and tossed-off, and the film similarly connotes a sense of almost casual warmth that belies how much more intricately staged it is than its predecessor. If Mamma Mia! felt too much like actors nervously stepping up to the karaoke mic, the sequel more closely resembles the carefree pantomime of Lip Sync Battle, from the theatrics of the musical numbers to the ways that the actors playing the characters’ younger selves excitedly channel the tics of their older counterparts. The film is like a visual earworm, its flaws overridden by infectious moments that, to take a cue from ABBA, you couldn’t escape if you wanted to.