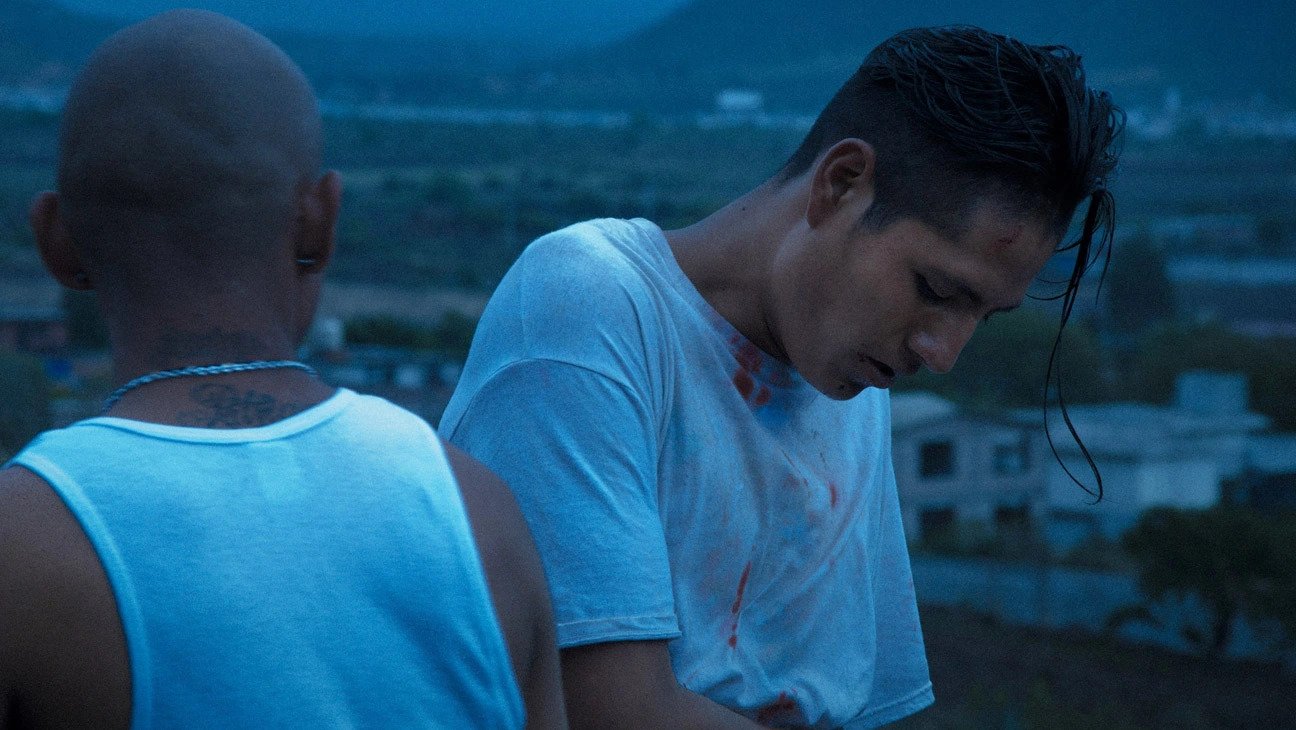 Taking on a special resonance by screening in the city that gives the film its name, Los Ángeles follows the flow of migration back to its other endpoint across the border in a Zapotec village in Oaxaca. Writer-director Damian John Harper mostly avoids the sensationalism that can come easy to migration stories without effacing the violence and economic pressure that attend to those journeys. He does this by focusing on the homefront and showing the communities that the migrants leave behind, return to, and support. Out of the cluster of characters we follow, three rise to the fore: Mateo (Mateo Bautista Matías), a teenager making preparations for the trip north, which includes joining a gang; Marcos (Marcos Rodríguez Ruíz), who’s made his way back home to settle down after years in the States; and Lidia (Lidia García), who waits for word from her incommunicado son.

The titular city maintains a spectral presence throughout the film; we never actually see it except in the blurry background of photographs, though the idea of it looms large as family members reference Torrance and Santa Monica, and other characters have Raiders and Dodgers gear as part of their wardrobe. The city is a symbol and an absence, and there’s a sense that going off to Los Angeles is like going off to war, at least in terms of the preparations involved and the state in which we see the characters return—or don’t. The village lives in the city’s shadow, an exurb thousands of miles distant.

The film shows this all with an ethnographic eye, capturing the moments of labor, family, and crime that coalesce into a portrait of community. Though there’s a wearying sense that Harper believes anything will look realistic enough it you film it in restlessly handheld shallow-focus close-up, the style does often work to give the film a tense biorhythm. It connects the otherwise bucolic space to the larger world outside, and it’s especially effective whenever the gang presence, violent or otherwise, is felt within the village. That presence is personified by Danny (Daniel Bautista), the local gang leader, who comes across with the right shades of duplicity and brutality to pose a credible threat without turning into a cackling villain. He’s an avatar of systemic violence that cuts across all the stories in the film rather than just a one-off sociopath.

The film’s performances, mostly from first-time actors, are compelling, and Harper uses his characters to build a social realist mosaic: Mateo’s rock-and-hard-place position with respect to the gang, Marcos’s alienation and discomfort settling down in what now feels like foreign territory, and Lidia’s uncertainty about whether or not her family can remain intact. The film treads lightly with the beats of all these stories and others, letting silences speak and allowing nuances of character to come across in details of performance and setting. After a certain threshold these beats seem to stretch out well past when the point has been made, and there’s a third-act turn to make the stories wrap up in a neat little package and something resembling a thriller ending, with requisite turnabouts and comeuppance.

Yet for all that, the film’s powers of observation remain mostly uncompromised. The problems of migration aren’t just confined to a single locale. They stretch out into a whole interconnected web of parents and children, hopes and fears, dreamers and predators. In Los Ángeles we never forget that we’re on the outside looking in. But the look that Harper provides is one that shows us the contours of experience in one node of that grand migratory landscape.

And on the other endpoint of that line of flight, we might find experiences such as those in Mike Ott’s Lake Los Angeles, where the dream of a promised land on the other side of the border ends in barren stretches of desert and the withering weight of open sky. Ott’s tone poem, forming a trilogy of sorts with his previous desert films Littlerock and Pearblossom Hwy, traces the intersecting lines formed by two people. Francisco (Roberto Sanchez) ekes out a living through day labor while also running a way station for migrants by night. The turnover rate at his establishment is rather high, but one guest sticks around: the mostly mute Cecilia (Johanna Trujillo), a young girl waiting for a father that never shows up. The pair have a brief moment of understanding and the closest thing to a family relationship we see in a place that seems unconducive to such things; even after their paths diverge we see how each has been affected by the experience.

Ott’s characters say very little but think a lot, and even then remain opaque in the best sense of the word as we search for handholds to grasp these characters and understand why they act the way they do. We see Francisco dictating into a tape recorder monologues to a distant wife, messages which perhaps never get sent. We see his dispassionate liaisons in motel rooms and the shedding of self that occurs when he performs menial labor; but none of these moments explain him, a Cuban émigré so far from home in the middle of nowhere. We only get hints, in the memories conjured by the sound of an old LP or the glance he gives a photo in someone else’s home. The question that coalesces isn’t so much “Why do people come here?,” but “Why do they stay?”

Cecilia’s perspective as a child adds to the alien qualities of the environment, with her whispering dreamlike voiceovers turning her journey into a fairy tale in fragments. She speaks to an old man in a snow globe, and her fervent half-memories/half-fictions display an imagination activated against and in spite of the barren expanse of reality; she tells herself stories in order to live. The film almost never retreats into the fantastical, but instead shows how the simplest signifiers—such as a lone Joshua tree or a baleful, nameless dog—hold fast to the experience of an untethered girl for whom all points of reference have been effaced. It all works because of an attentiveness to the character of the landscape, captured here in all its dreamlike qualities of soft light and flares and haze. Even if it weren’t from a child’s perspective, the images of a single shack amid a sea of giant windmills and their incessant rotation would astound; they appear as if from another world.

Ott is enamored with the slow creeping zoom, and though it works well at times to guide the eye, its continual use is the kind of jarring formalism that seems at odds with the rest of his controlled aesthetic. There are also some seeming tonal missteps, including an inconclusive and unexplained beat with Francisco getting involved in a criminal caper, and repeated play with the intertwining near-miss trajectories of the characters that calls to mind the film’s structural conceits more than anything else. However, these tremor-like deviations stand out because of the film’s otherwise precise poetics, which are emotionally incisive without resorting to blunt instrumentation. Lake Los Angeles is distilled postlapsarian Americana, a witness to the embers of life that burn at the fringes.

Much further south with another story of a girl seeking a father amid picturesque environments, Matías Lucchesi’s debut feature Natural Sciences follows Lila (Paula Hertzog), a girl born and raised amid the mountainous stormscapes of central Argentina. On the cusp of adolescence and wrestling with questions about her family and personal identity, she attempts to escape from her boarding school to go look for a father whom she’s never met. Rather than having her freeze to death on horseback in the middle of a mountain pass, though there’s ample evidence that Hertzog could probably display the fortitude to carry such a storyline, her teacher, Jimena (Paola Barrientos), ends up compelled to help young Lila with her search the old-fashioned way: by car.

The road-trip film is by now a well-worn indie-genre staple, and in terms of plot it’s not difficult to predict the beats that follow, with each leg of the journey slowly unraveling the mysteries of Lila’s parentage through relatively colorful characters while building a bond between our two protagonists. That said, Lucchesi certainly makes the most of the formula, letting that emotional journey unfold amid textured, lived-in hardscrabble locales. The film uses a narrow palette of earth tones and shades of grey, but there’s a subtlety to the way the film uses those features that certainly pops when we see television aerials against grey skies or the sparks of a welder’s furnace. They also serve as a muted backdrop for the clash between Lila’s unrelenting stubbornness and Jimena’s patient reserve.

That relationship is the key to making the film work, and we quickly get a sense of the rapport between the two, inasmuch as Lila is working through some things and Jimena gives her the space to work through them. The teacher serves mostly as Lila’s anchor and dispenser of life lessons, rather than as her own full-fledged character; we get the barest hints of a tragic backstory to sketch out why someone might want to take a teaching post in the hinterlands, and it’s not much to work with but Barrientos manages to make the connection with Lila believable.

Most of the weight of the movie rests on Hertzog’s shoulders, and she does the job admirably. For most of the film she has two modes: “sullen and withdrawn” and “headstrong investigator,” and she manages to thread those together as two sides of a mercurial young girl rather than coming off as schizophrenic. And as she approaches her goal, she also displays the nuanced sides of the character, coming to grips with the doubts and introspection that come with actually contemplating what it means to uncover your own past. Breezy and slight in its runtime, Lucchesi has crafted a coming-of-age film that’s modest in its ambitions, but touching nonetheless.