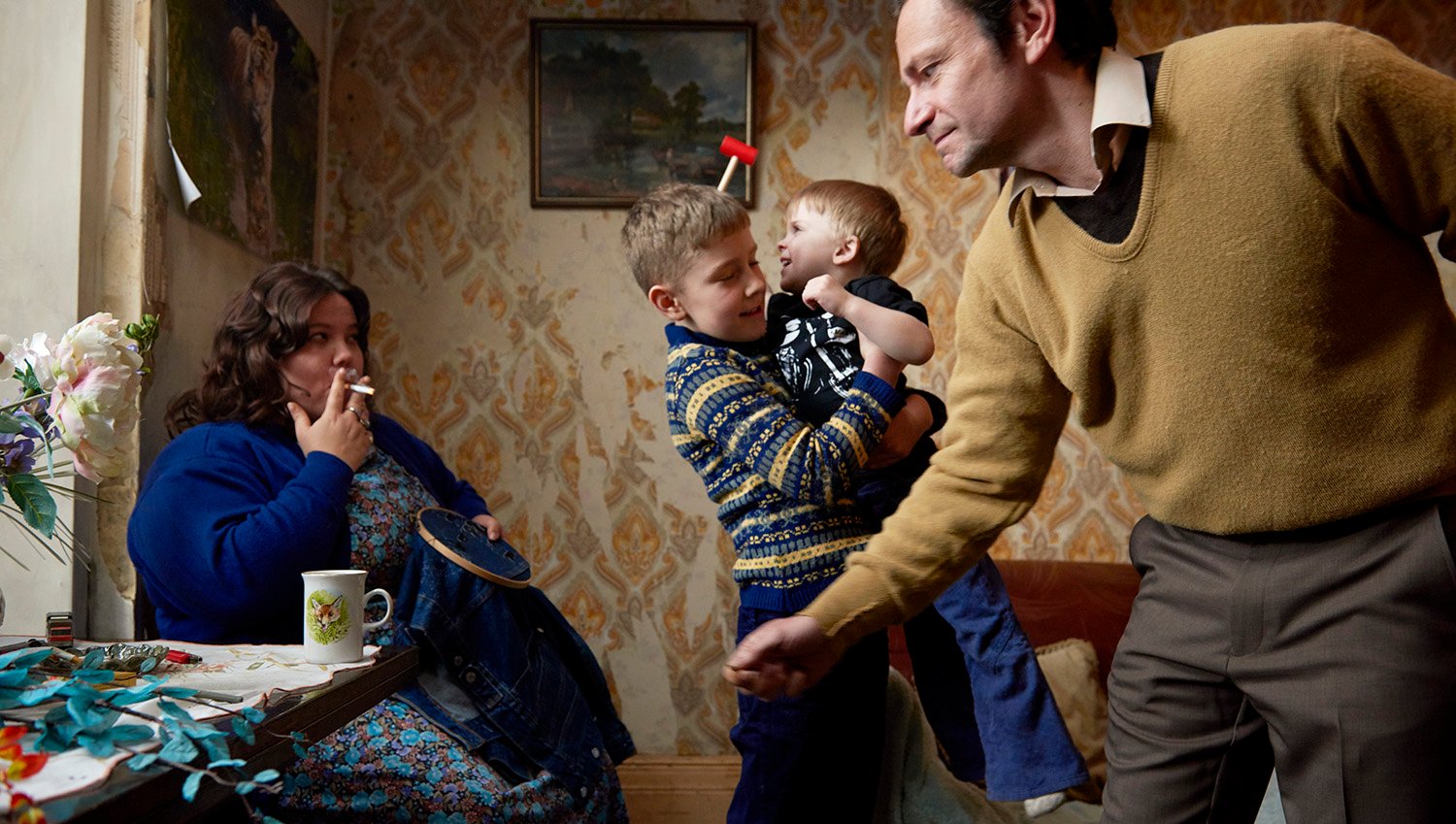 During my brief stint at Locarno, I managed to catch 10 of the 15 films selected for this year’s international competition. My favorite was Ray & Liz, British artist Richard Billingham’s remarkably assured autobiographical debut feature. Billingham rose to prominence as a photographer with his 1996 monograph Ray’s a Laugh, inspired by his impoverished upbringing on the outskirts of Birmingham and lauded for its unflinching portraits of his alcoholic father and sedentary, heavily tattooed mother. With this film, he reaches further into the dark recesses of his childhood to deliver a richly evocative portrait of working-class life in the British Midlands.

Ray & Liz’s opening sequence depicts an aging Ray (Patrick Romer) eking out a miserable existence that revolves chiefly around the ritualistic consumption of a tar-colored homebrew. As he stares blankly out the window of his decrepit flat, he begins to ruminate on the past. The bulk of the film’s action, such as it is, takes the form of two lengthy 1980s-set flashbacks, depicting a younger Ray (Justin Salinger) and his wife, Liz (Ella Smith), doing a frankly terrible job of raising a family. In the first, the couple unwisely leaves their toddler, Jason (Callum Slater), in the care of his uncle, Lol (Tony Way), who clearly has an intellectual disability, and who harbors an entirely rational fear of Ray and Liz’s unhinged lodger, Will (Sam Gittins). When Will inevitably returns home, he cruelly goads Lol into drinking himself stupid, in a nerve-shredding sequence that occasionally veers into misery-porn terrain (a shot of a dog licking up Lol’s vomit feels particularly gratuitous).

The second of Ray’s recollections is a little less visceral, though the lurid interiors and Daniel Landin’s claustrophobic cinematography ensures it’s still far from an easy watch. It centers around a now nine-year-old Jason (Joshua Millard-Lloyd), and explores more thoroughly the consequences of Ray and Liz’s negligence. It’s here that Billingham pulls off something remarkable, holding the parents fully accountable for their grave misconduct but very gradually engendering a degree sympathy for them, to the extent that their evolution from grotesque caricatures to fully rounded characters is barely perceptible. The result is a thrillingly fresh riff on kitchen-sink drama tropes, and an extremely nuanced portrayal of familial abuse. I, for one, was rooting for the film to take home a major prize at the festival’s closing ceremony, but Billingham had to make do with a special mention from Jia Zhang-ke’s jury.

Abuse of an even more egregious nature is exposed and explored in Yolande Zauberman’s M, the only documentary in competition at Locarno this year, and a worthy winner of the festival’s special jury prize. The film tells the harrowing story of Menahem Lang, a gregarious thirtysomething Israeli singer and actor who grew up in the ultra-Orthodox Jewish community of Bnei Brak, just east of Tel Aviv, where he was raped systematically as a child by multiple religious elders. In his 20s, Lang confronted one of his abusers, and secured an on-camera confession which was subsequently broadcast on national television. But he remained haunted by his past experiences, and convinced that sexual abuse in the community was still widespread, and so the film sees him return to Bnei Brak in search of further closure.

In its early scenes, M is strangely reminiscent of Martin Scorse’s Taxi Driver; Zauberman’s film is shot almost entirely at night, a striking number of scenes take place inside cars, and it’s all set to a heavy, jazz-inflected score. There’s even a hint of Travis Bickle in Lang’s childlike demeanor and palpable anger. But this all swiftly proves to be sly misdirection on Zauberman’s part. As damaged as Lang clearly is, he’s motivated less by vengeance and more by a desire to heal his blighted, pathologically secretive community.

Many of the city’s older and more devout inhabitants would clearly like Lang to keep quiet or go away, and Lang’s own parents prove maddeningly inept at offering their son the support he so clearly needs. But other encounters take less predictable turns. During his time back home, Lang strikes up a friendship with a 19-year-old who was abused by his older brothers. After sharing their darkest secrets, the younger man is emboldened to open up about the fact that he believes he may be gay but is also completely clueless about sex. The subsequent exchange, in which Lang attempts to bring him up to speed, is both heartwarming and laugh-out-loud funny. Like Billingham, Zauberman strikes a deft balance here, delivering a formally inventive film which is angry but empathetic, and which leaves the viewer with a sense that recovery from even the most appalling trauma is possible.

Menocchio serves as a stark reminder, as if it were needed, that systemic abuse in religious communities is by no means a recent phenomenon. Based on true accounts, it tells the tale of an unassuming miller in 16th-century rural Italy whose outspoken cynicism about, among other tenets of faith, the possibility of virgin birth provokes the ire of prominent local Catholics. Moodily lit and peppered with uncomfortably intrusive close-up shots, it’s a satisfyingly gritty period piece, centered around an impressively understated central performance by first-time actor Marcello Martini.

Director Alberto Fasulo’s film is particularly compelling when exploring the Catholic sacrament of penance as an effective form of mind control, while there are shades of Terrence Malick’s style in the film’s awestruck attitude toward nature. It’s a little disappointing, then, when Menocchio’s persecutors emerge as cartoonishly nasty antagonists. As such, Fasulo winds up pitting the virtues of humanism against the evils of organized religion in a manner that’s too clear-cut to be truly compelling or thought-provoking.