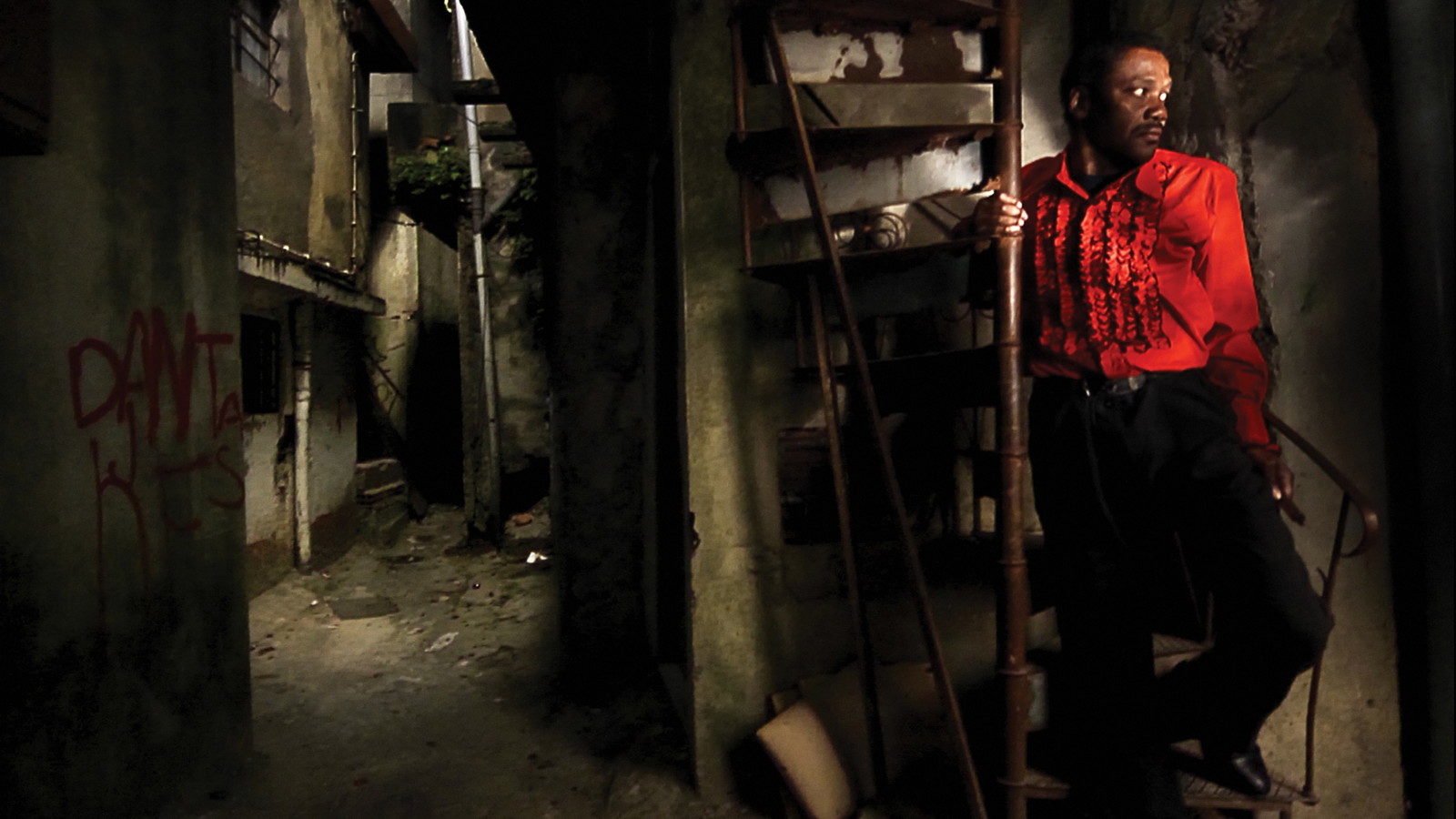 After dipping into relative, perhaps unavoidable mediocrity in the aftermath of the sublime formalist treats offered by Lav Diaz and Matías Piñeiro, the Locarno competition got back on track and then some with the arrival of Pedro Costa’s long-awaited Horse Money. This fourth feature-length installment of his ongoing Fontainhas series retains Colossal Youth’s heavy stylisation and rangy protagonist, Ventura, only to turn further inward. Grown old and unable to control his ever-twitching fingers, Ventura has been committed to a psychiatric facility, whose shadowy, spectral corridors double up as passages through the mind. These halls can lead anywhere—a snaking labyrinth whose endless connections bridge past and present, Portugal and Cape Verde, Fontainhas and the forest, a dilapidated factory, and a harshly lit elevator where all things flow together.

The film opens with a sequence of Jacob Riis photos, and only accelerates in accumulating further references from there on in, bouncing allusions to the previous Fontainhas films, art, cinema, music, revolution, and politics off one another like light ricocheting through a perfectly hermetic hall of dark mirrors. Even trying to take in and digest this onslaught of ideas and the infinite web of relationships they form is futile, with the sheer richness of material here likely requiring numerous viewings to be truly unpicked. Yet what makes Horse Money such a striking achievement is how unique the experience of getting lost in its maze of thought and image really is, at once confounding, disquieting, stimulating, and hugely emotional, not least in one extended monologue that ends by describing the violent death of a horse called Money. Despite the film’s utter singularity, I was oddly reminded of Inland Empire at times, another late-career work that goes about creating a summation of sorts by collapsing all boundaries. It can only be hoped that Costa doesn’t take the same amount of time following up this strangely final statement as David Lynch thus far has.

Costa’s film had the strange effect of relativizing many of the films that came before and after, perhaps just another example of the double-edged sword that watching films at festivals frequently is. Before having my mind frazzled by Horse Money, I was full of righteous indignation at Mexican auteur Nicolás Pereda’s Los Ausentes not having been included in the main competition, which showed instead in the more than modest setting of the new “Signs of Life” sidebar, where only two screenings, neither for the press, mean little exposure. The pleasures of Pereda’s film are purely formal, the languorous travelling shots with which it tracks its three key locations—a house, the forest surrounding it, and a beach—producing a delight in discovering new visual details over time unusually reminiscent of James Benning.

Pereda’s images are beguiling enough for you to often forget the brief snippets of narrative detail they convey, one masterly shot that glides across the faces of the men sitting in a municipal courtroom before floating out of the window to take in the bustling street outside exemplifying his liking for blissful detours. It gradually emerges that the house is marked for demolition and seemingly inhabited by two men simultaneously who never appear to meet. This sets up a sense of perhaps over-clean ambiguity, which allows you to play around with different discrete interpretations (the same person at different points in life, father-son, two people living at different times) without any individual one feeling particularly vital. There’s a sense of innate safeness here, particular when compared with Costa’s much baggier grasp of semantics, which ultimately keeps the film from transcending the art-film register it so effectively mines.

The audacious, formally striking Alive by Park Jungbum managed to relativize Los Ausentes even further, with the inclusion of the young Korean director’s dark, unrelenting tragedy in the competition being at once bold and entirely justified, Costa or no Costa. This three-hour marathon starts off with a solitary man (played by Jungbum himself) doggedly trying to clear an area of woodland, while his mentally unstable sister self-harms in an abandoned building nearby. The siblings work in a struggling soybean paste factory in the middle of nowhere, living together with the sister’s young daughter in a tumbledown house where they are only even staying at the whim of the factory boss. From this already grim beginning, things spiral ever further downward, as the need for greater profit leads to corners being cut, the brother takes on more responsibilities than he can bear, and the sister’s condition gradually deteriorates.

In the hands of a lesser director, all this doom and gloom could feel over-calculated or even laughable, yet Jungbum is thrillingly up to the task. The wall-to-wall despair is leavened by occasional moments of well-placed surrealism, whose bright colors break the otherwise grim palette of blacks, browns, and grays: a high-end television showing different animals on loop, the reddish bloom of a chick embryo growing inside an egg, a trip to a bra shop where no bras seem to come in white. Still very much anchored within the plot, these brief interludes of color are also emblematic of an affluence so far out of the characters’ reach it feels almost otherworldly. Yet this isn’t the only way in which the film sidesteps the formal monotony of a lot of superficially similar social realist tracts.

Like Pereda, Jungbum’s method of choice to capture this universe of suffering is the tracking shot, but unlike Pereda, these shots are interested in tracking something other than just breathtaking locations, serving instead to record and unify the many shifts in mood that go hand in hand with the protagonists’ struggles. Over the course of Jungbum’s sustained, beautifully choreographed shots, a simple set of questions can tip over into a witch hunt, an announcement of job cuts can morph into a beating, and a girl who seems utterly alone is suddenly able to direct things herself for the very first time. Perhaps most significantly, Alive may be a difficult, gruelling film, but it isn’t a cynical one. People visit pain on one another, but at least the option of kindness also remains ever present, if often far out of reach.

The “Cineasti del presente” sidebar, the second main competitive section of first and second films, has been home to such bracing, challenging works as Mouton, Manakamana, Costa da Morte, and Nana over the last few years, which left me with perhaps unreasonably high expectations for this year’s selection. But I was still surprised by the general mediocrity on display, whether tame forays into the increasingly over-mined border zone between fiction and documentary (Frère et Sœur), well-behaved essayistic documentaries (La Creazione di Significato, Songs from the North), or almost painfully archetypal Asian festival films (Hold Your Breath Like a Lover, Exit). Even the more successful films were still pretty modest in that success. Oscar Ruíz Navia’s Los Hongos is a look at the multi-faceted, globalised nature of Colombian society through the eyes of two young slackers which is almost utopian in its generosity and tenderness, though the way it fluffs the appearance of actual violence in the final act leaves it feeling slight. Antoine Boutet’s documentary Sud Eau Nord Déplacer pleasingly eschews direct commentary, wordlessly allowing the repercussions of a grand-scale national construction project to direct water from the south of China to the north to emerge. Visually striking, well edited, yet slightly overlong, it’s hard to criticize, but equally hard to get excited about either.

Luckily, though, there was one film that truly stood out from the crowd: Ricardo Silva’s salacious, unpleasant, yet utterly transfixing fiction-documentary hybrid Navajazo, which not coincidentally walked off with the main prize. Flecked with hypnotic essay-film passages that meld impressionistic video and 16mm footage of Tijuana with intertitles detailing how cancer spreads, the film otherwise jumps back and forth between a set of equally degenerate protagonists. These include a Gene Simmons lookalike singing mordantly funny synthesiser numbers, an American porn director casting his next production (which is to focus on true love), a junkie couple shooting up and getting it on, and two battle-hardened men willing to fight for money. Much of what these protagonists do, or are made to do, in front of the camera is depraved or even exploitative, but still gruesomely compulsive to watch, with the total lack of delineation between staging and real life adding an additional layer of fascination. While showing a desperately high junkie taking out her companion’s flaccid cock is problematic whether staged or not, and portraying Tijuana as a darkly funny, entirely one-dimensional hotbed of drugs, sex, and violence is equally questionable, the film is at least utterly mesmerizing in its perversion.

Review: Expedition to the End of the World

Summer of ‘89: James Cameron’s The Abyss