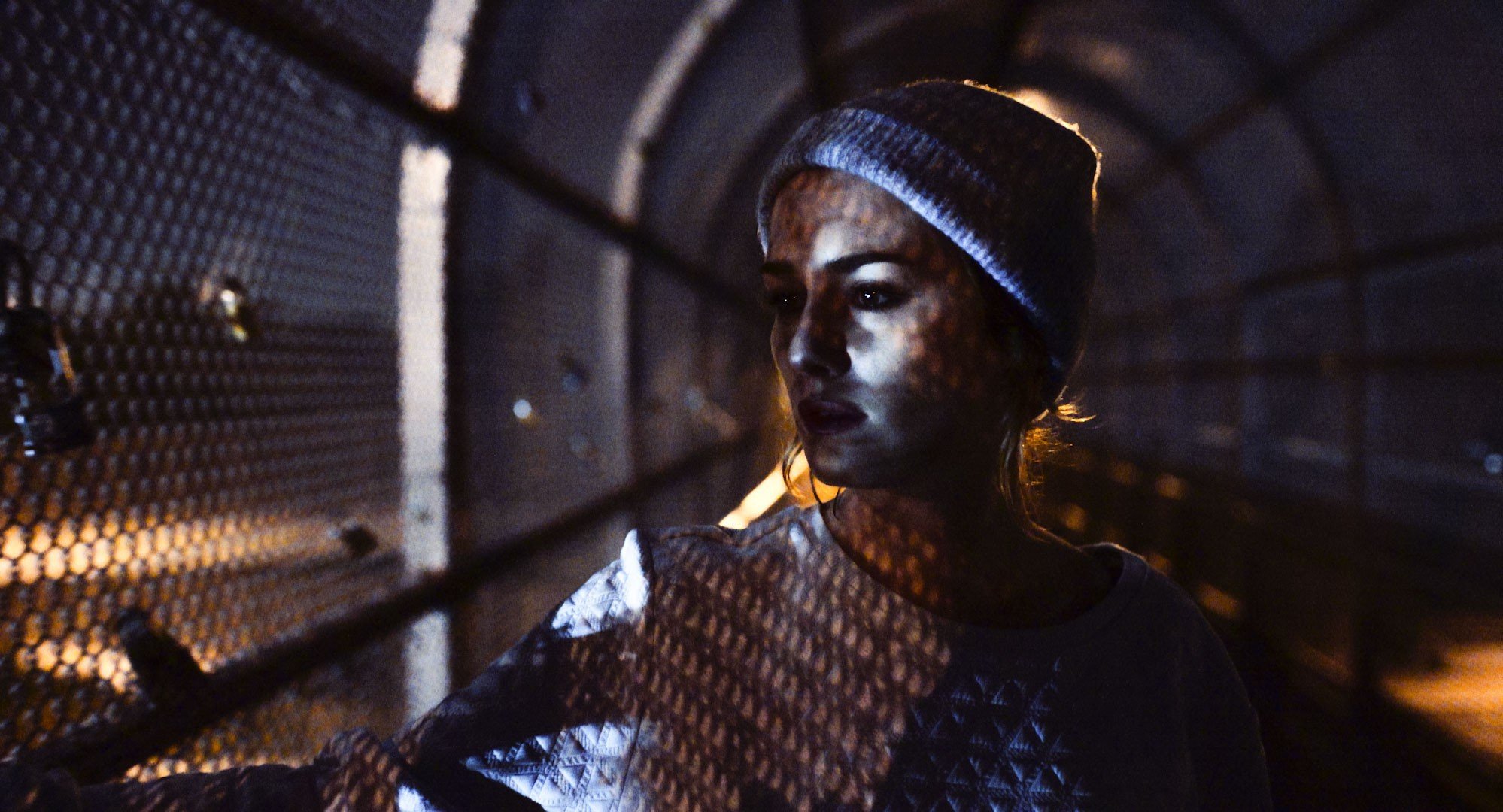 Robert Mockler’s Like Me is an unconventional fusion of horror film, road movie, and sadomasochistic sex drama, updated for a 21st century that’s dominated by the parlance and aesthetics of online culture. Fusing stock footage, differing film speeds, and neon-hued cinematography, Mocker fashions a shifting, hallucinatory realm that’s informed by the random memes and videos that one finds online. Like Me brings to mind Natural Born Killers, which similarly suggested, per the specificities of its own time, that social culture was being overtaken by tabloid news and music videos.

In the film’s opening scene, an aspiring online personality, Kiya (Addison Timlin), pulls her car along the drive-thru of a convenience store in the middle of the night and orders milk from the clerk, Freddie (Jeremy Gardner). The actors invest the arbitrariness of ordering milk with dry comedy, but the levity of the scene curdles into something more potent when Kiya runs along the back of the building, getting the jump on Freddie in the store while he looks for her milk. Wearing a sculpted white mask, Kiya silently films Freddie, waiting for him to do something that’s presumably worthy of the internet.

This sequence has a fascinating multitude of tones and textures. Mockler cuts between the footage that’s meant to have been captured by Kiya’s camera and that representing the outer omniscient reality of the film. Kiya’s footage is dimmer, while the omniscient footage is hotter and more surreal, with vivid blasts of color. The conceit, then, is that Kiya’s inadvertently blocking out elements of life in her myopic quest for celebrity. Yet, the unreality—the movieness—of Mockler’s omniscient images underlines his own shaping of reality, rendering himself complicit with his anti-heroine. Mockler also evinces an unusual degree of empathy for the victim of this scene. Freddie has an exhausted dignity, eating pretzels and enjoying an illicit beer while ridiculing Kiya’s vanity, until she produces a gun and humiliates him.

Mockler doesn’t provide an explicit psychological profile of Kiya, and the audience learns nothing of her past and little of her present. Beautiful and wraith-like, she exists as an implicit reaction to online male fury as evinced by controversies such as Gamergate. Kiya posts her disgusting videos online and men are primarily concerned with asserting their dominance over her in the hierarchy of what they perceive to be their world, particularly Burt (Ian Nelson), a schmuck who fancies himself a master of online cruelty. Seeking Burt’s validation, Kiya ups the ante on her stunts, kidnapping a motel proprietor, Marshall (Larry Fessenden).

Marshall is quite a bit older than Kiya and can remember an age not governed by clicks and “likes.” He isn’t a modern guy, yet Marshall uses his motel as an avenue for world-building in a fashion that parallels how many of us use the internet to assert our own form of personal and social control. Marshall’s private bedroom has a ceiling that he’s painted to resemble a sky swirling into a great vortex with the overhead light suggesting a sun. Kiya’s rented room—stark white and punctuated by blasts of red—would be a perfect setting for a burlesque inspired by the films of Dario Argento. Kiya invites Marshall to come to her room and fuck her, telling him that she’s 17, seeing if he’s willing to violate a social and legal taboo. He most certainly is, and she comes on to him in a black mesh mask, straps him to her bed, force feeds him junk food, and punches him in the stomach, causing him to throw up while she films everything. Kiya’s torture is disturbing and consciously literal-minded, as she’s throwing Marshall’s piggishness back in his face.

Yet Mockler doesn’t share Kiya’s penchant for preachiness. Marshall has more dignity than Freddie, as he refuses to buckle under Kiya’s torments. Once she’s imprisoned him in her car, Kiya asks Marshall why he’d fuck a person he believes to be an under-aged girl, and he says that he savors ripeness, which can’t be reduced to a number. Marshall’s willingness to honor himself—to arguably adhere to his piggishness at the risk of peril—entices Kiya. Perversely, Marshall is a man who shoots straight with her. A scene of Kiya and Marshall driving through a fantasy-scape that suggests the inside of a blood vessel is almost romantic, as they’re entering a realm of shared subjectivity.

Throughout their scenes together, Timlin and Fessenden toe a supple line between honoring behavioral specificity and proffering an outward stylization that complements Mockler’s bold aesthetic. Timlin informs Kiya with a cruelty that’s puckish and understood to stem from loneliness without defanging the character. Timlin’s line readings have a deadpan poetry, and her swift and certain physicality parodies the notion of millennials believing themselves to know more than they actually do. By contrast, Fessenden radiates experience and exhaustion with disappointment. Over the years, Fessenden has evolved into a rock star of character actors, his rumbled, sexualized charisma suggesting a Jack Nicholson of contemporary American independent cinema. And Mockler gives Fessenden one of the best scenes of his career as an actor: Kiya dopes Marshall up on horse tranquilizers, inspiring him to stage a wounded soliloquy of angry and searching facial gestures. Fessenden physicalizes this man’s alienation as qualified grace.

Like Me is exhilarating because of Mockler’s willingness to deviate from his satire so as to surprise himself with seemingly spontaneous emotional textures and tangents. The film blossoms into a debauched fantasia of longing, potentially announcing the arrival of a significant new artist.

If I Were a Rich Man: Salesman