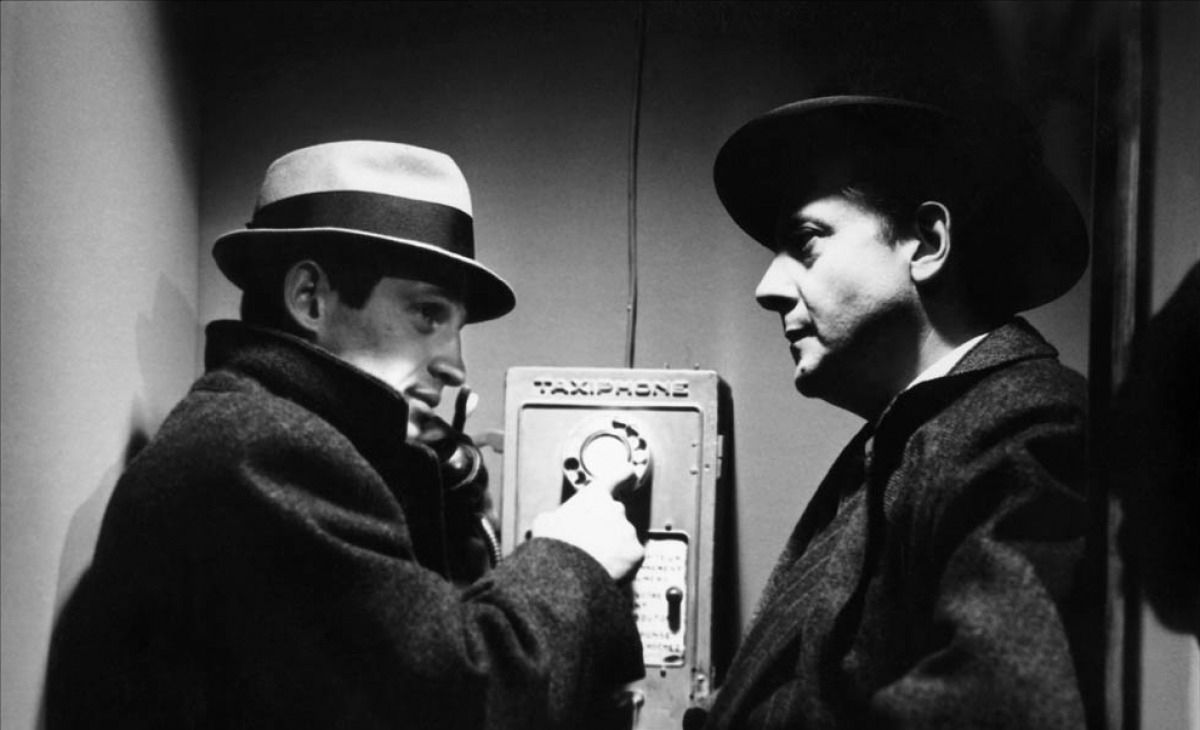 Smoke—billowing and dispersing like cumulus clouds, swathing everything and everyone in a gorgeously opaque haze—is Le Doulos’s expressive lifeblood. Trailing off the end of cigarettes, escaping from mouths, spilling out of a gun’s barrel, or rolling off city streets and dark waters, smoke is universal in Jean-Pierre Melville’s crime saga, his first true série noire, and one whose deliberate narrative confusion between good and bad is seductively expressed in its miasmatic atmosphere. There’s a bottomless richness to Nicolas Hayer’s cinematography, his blacks grainy and inky, the light delicately bouncing off the dark and the fog elegantly streaking across the screen. The depth of his images gives weight to that smoke, swirling around the fedora-adorned head of Jean-Paul Belmondo’s ambiguous crook Silien and his friends on both sides of the law, encasing them at once like a lover’s embrace and like a straightjacket, evoking dual sensations of escape and imprisonment. It’s smogginess to swoon over, embellishing a panorama of hardboiled double-crosses, devilish deeds and dignified sacrifices with an air heavy (literally and figuratively) with the intangible yet omnipresent presence of fate.

That mood—of destiny hovering over the damned—is paramount in Le Doulos, as Melville’s 1962 crime saga is more memorable for its storytelling than for its story. An opening tracking shot of recently paroled thief Maurice (Serge Reggiani) traversing an underpass has a shadowy splendor that establishes—in the camera’s increasing distance from its subject (until the final zoom), and in pans up to gratings that resemble prison bars—the film’s piercing fatalism. Maurice soon murders a fence and steals his jewels, has a heist interrupted by the arrival of the police, murders a detective during his getaway, and then after being picked up and sent to the Big House, begins to suspect that comrade Silien was the cops’ informant. It’s a basic setup in theory, yet one that Melville (adapting from a story by Pierre Lesou) drenches in Big Sleep-esque misdirections, reversals and red herrings, his serpentine scripting employing propulsive momentum as compensation for the impenetrability of characters’ true allegiances and relationships. The director makes motivations enigmatic while using brisk compositions and modulated rhythms to keep plot particulars lucid and riveting, a strategy in which the “what” is unmistakable but the “why” remains, until the end, just out of grasp.

Le Doulos roots itself in traditional noir themes of providence, of loyalty and betrayal, of male codes of honor, and ultimately of man’s inability to escape his lot in life (“In this business, you either end up a bum or full of lead,” growls Silien). In this romantically gloomy environment, no one gets out alive, which, perhaps, is why Melville’s doomed protagonists so often encase themselves in their cigarettes’ hazy fog: They instinctively know that, confronted by fate’s immutable design, you may as well smoke ‘em while you got ‘em.