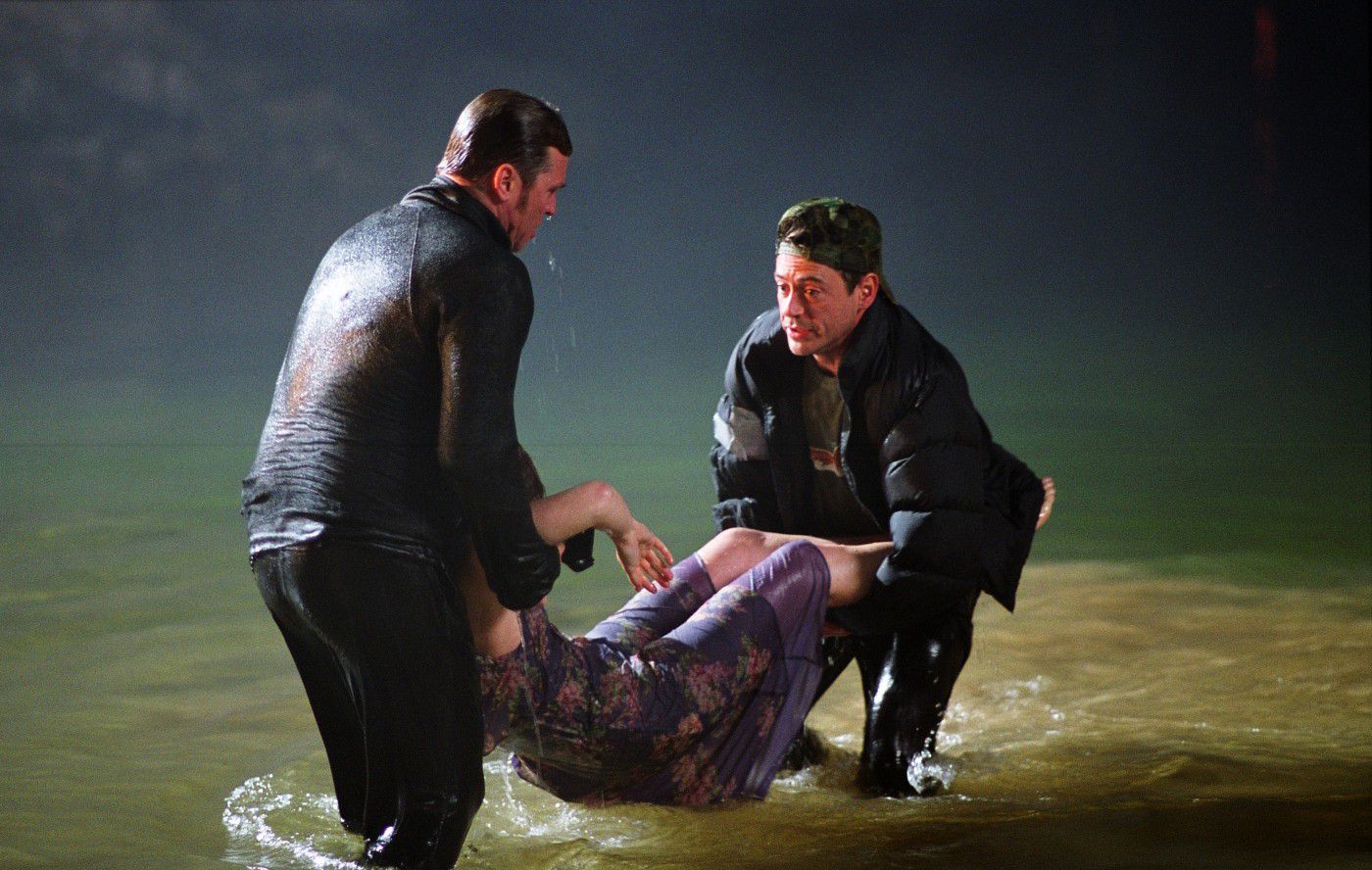 A silly, self-reflexive lark oozing spitfire sarcasm and nonchalant cool, Kiss Kiss, Bang Bang, based on a novel by Brett Halliday, heralds the return of Shane Black, the former screenwriting superstar whose Lethal Weapon and The Last Boyscout helped pioneer that most formulaic of modern cinematic beasts, the action-comedy buddy film. Back from exile after the twin catastrophes of The Last Action Hero and The Long Kiss Goodnight torpedoed his high-flying career, Black’s directorial debut is a madcap noir whose Byzantine plot about La-La Land murder and deceit, employment of traditional crime story tropes (doppelgangers, show biz sleazeballs, hit men, and whores), and homage-heavy chapter titles all reveal its Raymond Chandler roots.

While fleeing the cops after a botched robbery, two-bit East Village thief Harry (Robert Downey Jr.) finds himself smack dab in an acting audition that, in the first of many whiplash narrative left turns, leads him to Hollywood. There, along with Val Kilmer’s queer private detective Gay Perry (who’s helping Harry prepare for an upcoming role as a P.I., and whose name is a monumentally lame phonetic joke) and his childhood sweetheart Harmony (Michelle Monaghan), who relocated from their small Indiana hometown to the West Coast to become an actress, Harry becomes embroiled in a convoluted whodunit regarding two seemingly unrelated dead women. From Harry’s narration (which constantly comments on itself and the proceedings) to the plot’s habitual references to a series of Chandler-esque detective paperbacks Harmony adored as a kid, Kiss Kiss humorously steeps itself in the dames-and-revolvers trappings of hard-boiled gumshoe literature.

Unfortunately, unlike The Big Lebowski or The Long Goodbye—two successful attempts to reimagine noir mysteries as slackerish comedic odysseys that nonetheless remained true to the genre’s downbeat irony and contagious fatalism—Black’s frivolous farce cares little for the underlying passions and despair that fuel Chandler and Dashiell Hammett’s pulp fiction. As its smart-alecky title implies, Kiss Kiss Bang Bang is a decidedly tongue-in-cheek affair, freely draping itself in B-movie accoutrements while frustratingly refusing to engage in anything more profound than a few shootouts, car chases, and gay-related quips. That such triviality doesn’t sabotage Black’s endeavor is a testament to Downey’s eminently likable accidental hero, the actor’s smart-ass insouciance and rapid-fire banter with Kilmer resulting in his most amusingly frantic performance in years. But the zany film’s minor pleasures are primarily due to Black’s mastery of the studio picture template, which he curls, contorts, and misshapes with reckless (and occasionally clumsy) abandon until its self-conscious superficiality becomes part of its messy, freewheeling charm.