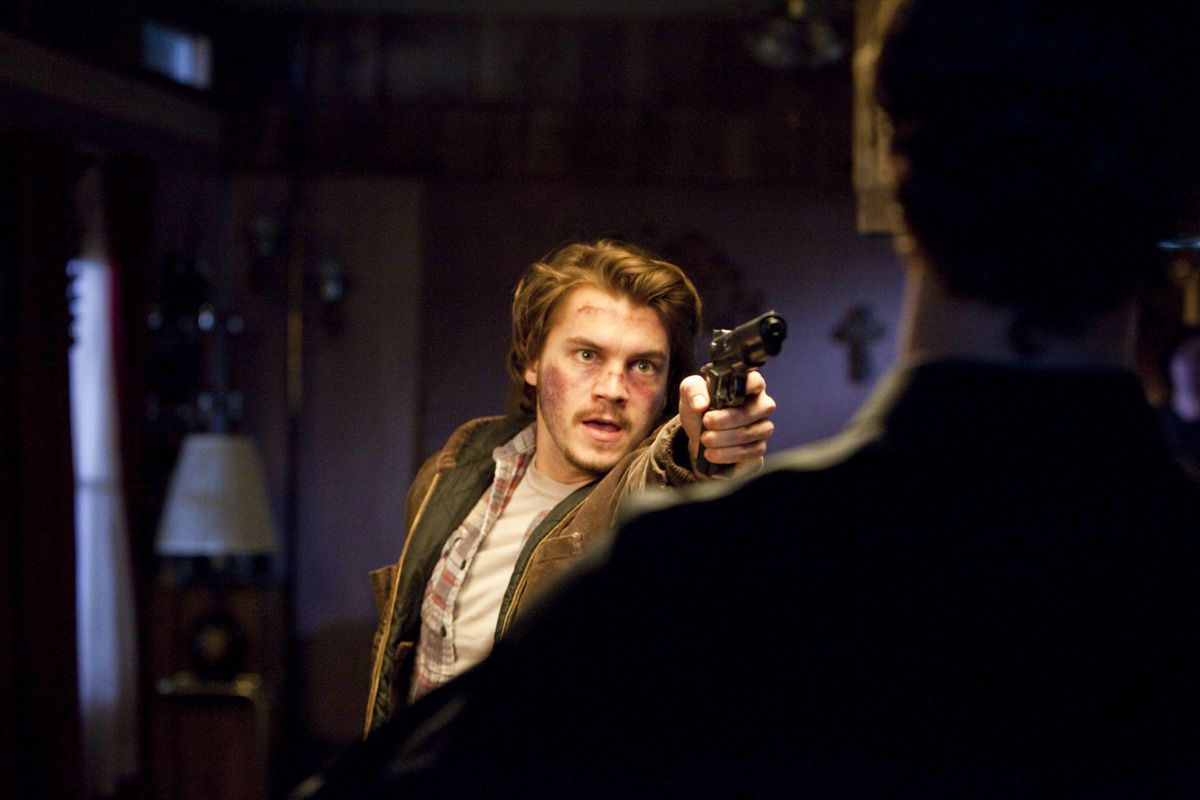 William Friedkin’s second film adaptation of a Tracy Letts play, Killer Joe begins with an oft-repeated shot of black night violently blitzed by thunder, setting the jolting tone of this singularly bonkers noir-horror whatsit in which violence is a constant, possibly even a necessity. Somewhere in Bumblefuck, Texas, outside a visibly small trailer with more square footage than a sizeable two-bedroom New York City apartment, a dog barks uncontrollably and a bum fire burns, and keeps burning, long after the bums have left. But did bums even start the fire? Empty atmosphere, maybe, though part of Friedkin’s almost surreal insistence on elevating Letts’s play, about a contract killer and his relationship to the family of the young fucktard who hires him to slay his mama, to the realm of what may be described as phantasmagoric neorealism.

As in Bug, there’s gusto to Friedkin’s use of light, color, and sound to evoke subjective experience. Throughout, he treats music as an ephemeral accent to stylized depictions of lowlifes in crisis, most dynamically in a prismatically shot chase sequence between two biker thugs and Chris Smith (Emile Hirsch), who contemptuously views Texas as a vast wasteland no one’s really figured out how to live in. His rant, delivered to his equally twisted sister, Dottie (Juno Temple), on railroad tracks, reflects Letts’s fixation on everyday Americans psychically at odds with their surroundings. Except for Joe Cooper (Matthew McConaughey), whose swagger and soundless way of quieting the neighbor’s ever-barking pooch gives off the sinister scent of something more pathological—of a man doubly disconnected from his environment, thriving on the fear his debonair remove strikes in the hearts of hicks.

Killer Joe is mean in style and mean toward its characters. It thrills in seeing dumb people getting their due in hyper-stylized displays of violence, and yet it never feels contemptuous of them. When Chris pathetically begs his father, Ansel (Thomas Haden Church), for $5,000 to pay off a debt to a loan shark, even just a grand, the old sadsack casually reveals that he’s never even had $1,000 in his entire life. That humane commiseration for what it means to be down and out is admittedly surprising, also reflected in the way Ansel’s new wife, Sharla (Gina Gershon), turns a wrong order at the pizza joint she works at into dinner for Dottie—just as she makes, on the turn of a dime, a personal phone call seem like an order for food. The scene is a tipoff in more ways than one, but it’s most rich as a reflection on the resourcefulness of our starving class.

Killer Joe feels undercooked, beginning as noir and culminating sloppily as trailer-trash Grand Guignol. It’s less metaphoric than Bug, less manically attuned both to the corporeal and the psychological. But even when it completely loses its narrative bearings and sets out to earn its NC-17 rating with, among other things, a spectacularly orally fixated use of fried chicken, the actors grippingly and fearlessly delight in etching their characters’ incompatible agendas: Gershon ambitiously snarling; Haden Church hauntingly resigning himself to his pathetic station; and McConaughey, exposing more flesh and talent here than ever before, showily sniffing for a worm. Then there’s Temple, whose unhinge-ness, the way she drops in and out of self-made fantasy, reveals the pungent film’s soft center. For Dottie, the film argues, it does get better, and euphorically so—but only in blood and guts.