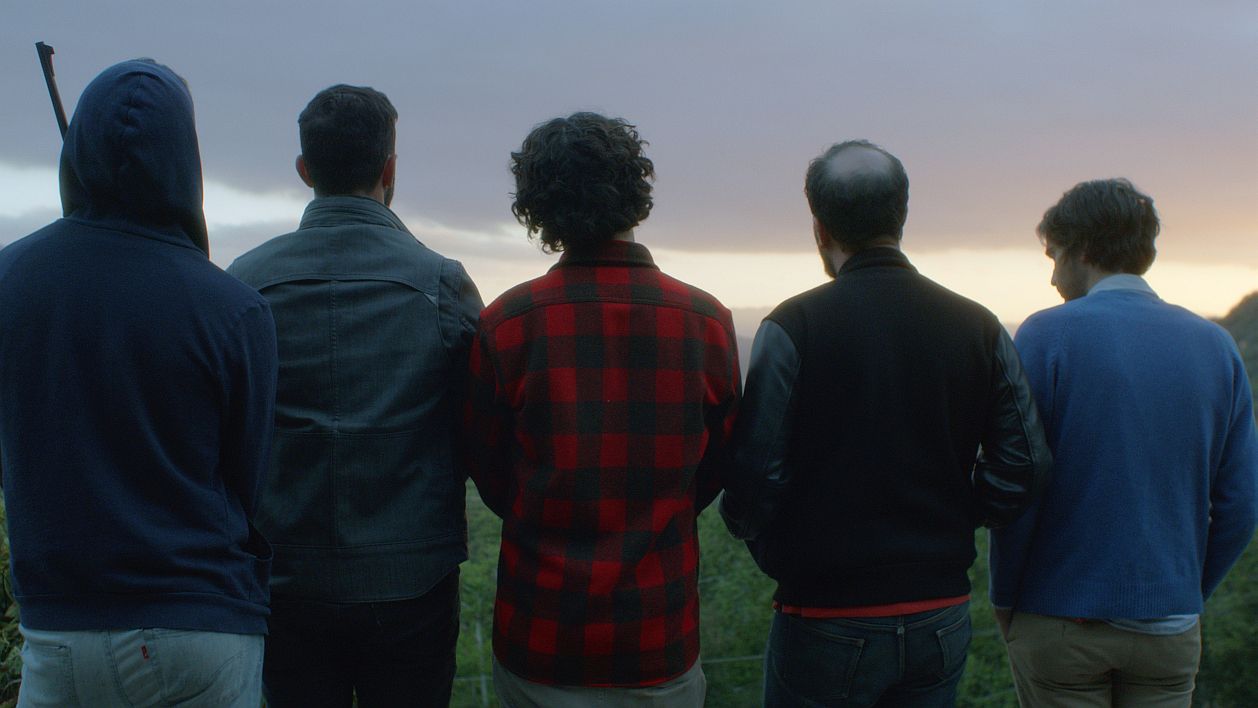 Writer-director Jeff Baena’s Joshy begins with a viscerally assembled montage that transforms the mundane into a kind of sensorial experience. Josh (Thomas Middleditch) returns home from work, greets his fiancée, Rachel (Alison Brie), then heads to the gym while she prepares dinner. All the while, their apartment appears bathed in bright white, the soundtrack heightening the pitch of incidental noises to disconcerting effect. Everyday routines are reduced to a series of specific sounds and images, such as the pounding of feet on a treadmill and harsh sunlight hitting a wall. Which is why Josh’s discovery of Rachel having committed suicide is all the more shocking, as this disturbing sight shatters our perception of these characters’ lives. Through an emphasis on commonplace occurrences, Baena conditions us into believing the pair leads relatively stable lives, only for the filmmaker to reveal how that rush to judgment is ultimately naïve.

This opening establishes Baena’s extended riff on the presumptuous of people, in this case a group of friends, claiming to fully understand one another. We reveal different things about ourselves to different people, and in what seems like an almost Brechtian distancing effect, Baena continually dares us to draw our own conclusions about his characters, only to comically or melancholically pull the rug out from under us. Throughout Joshy, multifaceted personalities unfold in such simultaneously exciting and maddening ways that, even though the film’s characters appear to reveal every aspect of themselves throughout the duration of a debaucherous weekend getaway, they remain fundamentally unknowable.

In the wake of Rachel’s death, Josh soldiers on, gathering his various friends for a weekend at a house in Ojai that was intended to host his bachelor party. Despite its title, the film dwells equally on all its characters, and in strikingly empathetic ways, homing in on the individual perspectives that shape people’s beliefs and actions and how the mood of a given situation can be interpreted differently and inform and influence one’s behavior. The film feels as if it’s always shifting perspective, sometimes within the course of a single shot. At a local bar, Eric (Nick Kroll) and his tagalong friend, Greg (Brett Gelman), goof off as the camera casually drifts toward and eventually outside of a window to listen in on high-strung Adam (Alex Ross Perry) arguing with his girlfriend on the phone as they break up. A diverting time at a bar that was meant to be fun turns out to be a displeasing one for Adam.

Joshy focuses on its characters’ spontaneity as they try to sustain a freewheeling party atmosphere, often in cheerful and snarky avoidance of all the pain that Josh still obviously feels over Rachel’s death. But these feelings must be dealt with head-on, and in at least one instance the film nearly derails in observing how individuals cope with grief. Having caught wind of Josh’s party weekend, Rachel’s parents, Claudia and Steve (Lisa Edelstein and Paul Reiser), come to visit and confront Josh with their suspicions about their daughter’s death. This sequence, which has Claudia and Steve yelling accusations at Josh and waving around an autopsy photo of their daughter, is so tonally histrionic as to take the film into the realm of Kabuki theater.

The film feels most real, even at its most absurd, when focused on the idea of closure as a kind of fantasy, tying that idea to the spirit of a party where people behave impulsively in the moment. Adam and Eric argue music, only to forget about their differences moments later. More profound, though, is the relationship that develops between Ari (Adam Pally) and Jodi (Jenny Slate), a woman celebrating her birthday with friends at a nearby house. Ari uses the fact that they attended the same summer camp as children to prolong the debatable innocence of their flirtation, but guilt gets the better of him, and he finally confesses to being married. No skin off her back, she claims, but her terse goodbye suggests otherwise. In the ephemeral nature of a party, as Joshy articulates, shit happens and some things are left unsettled—perfectly epitomized by Greg when he states that, while he’ll remember the weekend for a long time, he’ll probably never see most of these people ever again.