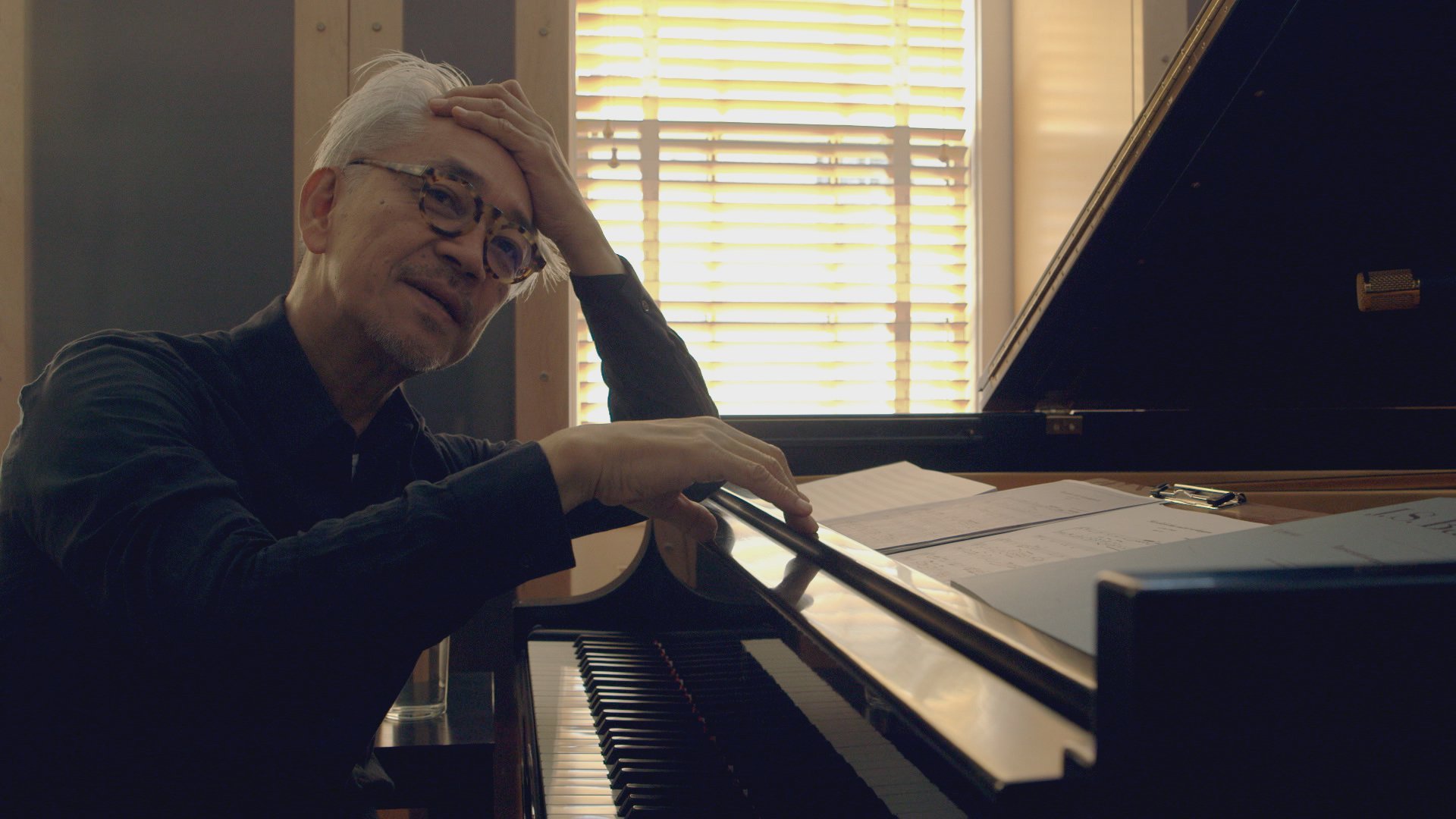 When Ryuichi Sakamoto toured in support of his 2000 album BTTB, he attuned his audience’s ears by performing a piece of asynchronous music. The indelible, disquieting moment provided a palate cleanser that ultimately heightened the experience of listening to his piano playing that evening.

That moment is a terrific metaphor for the musician’s career, as Sakamoto has dedicated his life to paying attention to sound and getting others to listen closely. As Stephen Nomura Schible’s documentary Ryuichi Sakamoto: Coda reveals, the musician hears “pure sound” in melting snow, and that he can create music by taking a violin bow or a coffee mug to a cymbal.

Sakamoto’s extensive music career began with the Yellow Magic Orchestra back in the late 1970s. But most American audiences will be familiar with his music from film soundtracks. The haunting song “Forbidden Colors,” from the soundtrack to Nagisa Oshima’s Merry Christmas, Mr. Lawrence, put him on the map—as did the film, in which he co-starred with, and stared homoerotically at, David Bowie. (Sakamoto explains in Coda that he didn’t want to appear in the documentary unless he could compose the soundtrack.)

Coda features clips from Merry Christmas, Mr. Lawrence and the other films for which Sakamoto has composed soundtracks, from Bernardo Bertolucci’s The Last Emeperor, for which he won an Academy Award, to Alexander González Iñárittu’s The Revenant. But the film is more interested in providing a larger portrait of the musician, exploring his work as an anti-nukes activist, his experiences as a cancer survivor, and his fascination with the natural world.

Recently, I had the pleasure to sit down with Sakamoto at his West Village studio to talk about Coda, his fight against cancer, and his approach to music.

In the film, you play a piano that survived the 2011 earthquake and tsunami in Japan, a metaphor perhaps for your own survival. What observations do you have about survival and the longevity of your career?

That tsunami made me think deeply about the meaning of that piano—about nature, and what nature is. A few years after I encountered the piano, I was diagnosed with cancer. I am a survivor of cancer. Inside me, it’s all connected: the force of nature, the piano, my body. I think that everything is part of nature, or a process of it. Getting a disease is a process of nature. A tsunami and an earthquake are processes of nature. Being damaged by the force of nature is just another process. I’m relieved to know that.

I am very good. It’s been more than three years, and I’m surviving.

You’ve reinvented yourself in different ways over the span of your career. Can you speak to that? It’s been fascinating to behold.

I’ve been through many different phases of my life, but to compare having cancer or being very close to that magnitude of an earthquake and a tsunami—that doesn’t compare to Yellow Magic Orchestra, or [making] film music, or electronic music. Those are just episodes of my life.

You are seen in the film visiting the contaminated zone at Fukushima and are very anti-nuclear power. We see you demonstrating against the plant. Why did you devote yourself to this particular activist cause?

I became interested in and concerned with the environment in the early ‘90s. I was advocating for that. In about 2006 or 2007, I encountered the Greenpeace website telling me about the nuclear-waste recycling plant, that recycles wasted uranium to make plutonium. There was a big facility in northern Japan. I didn’t know about that, and I was so surprised. The radioactive emission is much higher than the usual nuclear plants. Like 300 to 400 times more emissions than the regular nuclear plant. I wanted to tell all the designers, photographers, and creators around me, so I decided to create a special website for that, to get them to know about this facility.

I like the idea you express in the film of never being discouraged or content. This feeds into your work ethic. Can you discuss your restless energy and spirit? I appreciate your need to create meaningful work, work you aren’t ashamed to leave behind. What’s your philosophy of work?

My philosophy—if I have one—is that creation must be a surprise. I should surprise myself to create something new to me. It’s a kind of a stupid trick on myself. I’d like to surprise myself, but I know what I’m doing. It’s a difficult task. I know what I know and what I have done, so it’s difficult to surprise me still. The key is easy: I’m not satisfied. I’m never satisfied. Of course, I love the music of Bach and Debussy, and if I’m satisfied listening to those two masters, then I don’t have to create music. But fortunately, or unfortunately, I’m never satisfied—even by my own music. That’s the ultimate driving force for me. I’m seeking something new, something unknown to my ear.

There’s a link between sound and image as well as sounds and music in your work and in your world. How did you develop such an attuned ear?

I loved the idea you express about perpetual sound and asynchronous sound. That, to me, is all about emotion. What’s the emotion of music to you?

One day, I asked myself a big question: Why is all music of the world—not only popular music, but also classical and ethnic music—based on synchronization? All the parts of the music had one united tempo. So, let’s try to make something different. I started from that question. I had been experimenting in many ways. Some parts failed. It’s not that I didn’t like them, but I included the good parts of my experiment on my async album. Then I thought, just experiment with asynchronization. But it couldn’t guarantee this is good or interesting music. There are still two groups of results: good music or not good music. No matter if it is synchronized or asynchronized. There are always two groups: music I like, and music I don’t like. So that’s the result. Some experiments I did weren’t good. Maybe some logic was wrong, or maybe the timbre is no good. There could be many reasons, but there was something I didn’t like. There may be some beauty there.

There’s an interesting juxtaposition seen in the film where you talk about a computer helping you create music because humans can’t play the notes fast enough. Later, you’re then seen using a computer to edit and create music. What are your thoughts on computers and music?

It’s convenient to use computers. Very convenient to edit the music, record, and put in effects. Doing the same thing with all analog technology is very difficult. I really appreciate [technology]. Making a sound collage, computers are very useful. If we make a sound collage using analog techniques, it’s really hard work. In the ‘50s and ‘60s, those masters and composers were doing that, and it was so hard. The more we’re getting surrounded by this new technology. I want to hear the sounds of things more and more.

How much of your work is computer-based, insofar as you’re creating a sound and then manipulating it?

Assembling all the materials, and manipulating and editing it—all the patchwork, putting different colors, like effects—I always say that making music is like fishing and cooking. The recording of the sounds, and finding good sounds, is like fishing. Then bringing the fish back to home, you start cooking. This is cooking. Fishing might be five seconds, if you get in the right place, and cooking can take up to a day. It’s a good example.

Your soundtracks are beautiful. Do you ever reminisce about that work?

It’s funny, when I was young, I thought no matter if the film is good or not, my music in the film should be good and stand out and should be heard. [laughs] Now, I’ve changed my mind. Music in films shouldn’t stand out so much. It should get along with the images well. So, it’s a huge change for me.

All kinds. Old and new, but mostly Bach.

That’s my root music. The music of Bach was the very first music I got to like. I was six or seven years old. Before that, there was film music I liked when I was four or five. I still remember the first film music I liked was Nina Rota, from Fellini movies. My mother liked Fellini movies, so she brought me to the theater. I still remember the melody.

Did you think then you would make music for movies one day?

No, no, no. I never imagined. Never imagined. But I liked film music, Lawrence of Arabia, and The Alamo, with John Wayne, a big Hollywood movie, and The Longest Day, a Normandy D-Day film.

I like your idea of playing music every day. What else gives you pleasure?

Listening to the sound of rain. Almost every time it rains, I start recording it. Almost each day. What else? Sensing the movements of the wind. Those very subtle things give me so much pleasure.

Review: Under the Tree