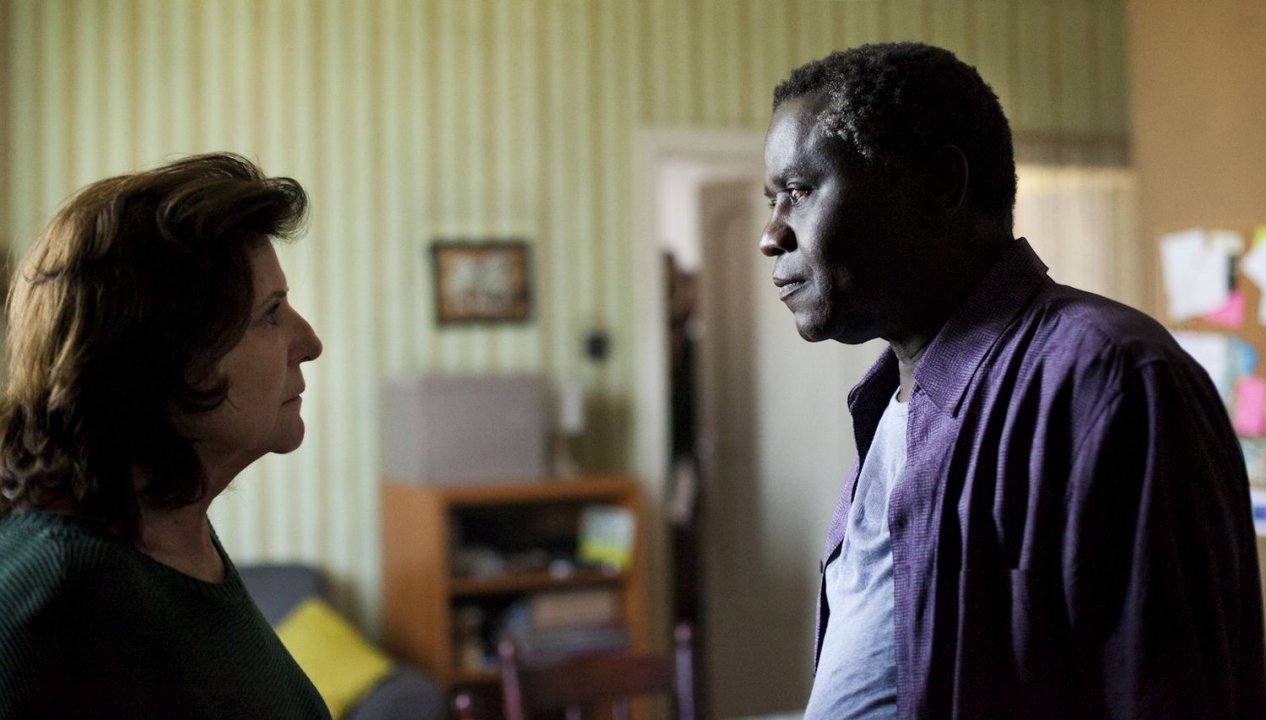 The plot of director Roland Vranik’s The Citizen begs comparison to that of Rainer Werner Fassbinder’s Ali: Fear Eats the Soul. In Vranik’s film, Wilson (Cake-Baly Marcelo), a middle-aged Guinea-Bissauan refugee living in Budapest, forms a sexual relationship with a married Hungarian woman, Mari (Ágnes Máhr), who’s tutoring Wilson for his upcoming citizenship exams. In both films, the interracial couple’s path toward free will in finding love is derailed by disapproving locals and family members, who alienate the lovers through psychological torment and acts of violence.

In The Citizen, the Hungarian immigration court is an additional obstacle, as Wilson’s bid for citizenship relies on him passing a rigorous test about, among other things, Hungarian art, government, and philosophy. Whereas Fassbinder pared his story down to focus on the inner lives of his two protagonists, thus allowing for an intricate and elegant portrait of love and discrimination, Vranik overloads his film with narrative threads, leading to a third act devoted to resolving outcomes rather than burrowing into emotions. That includes the status of Shirin (Arghavan Shekari), a pregnant Iranian refugee who Wilson takes in after his former roommate promised the woman a place to stay.

Vranik and Iván Szabó’s screenplay establishes a convincing basis for racial resentment by having Mari’s adult son, Károly (Máté Haumann), question why Wilson deserves to become a Hungarian citizen at all. Rather than defend the notion of immigrants as an essential component of Hungary’s populace, Mari turns the question on Károly, saying that he could learn a thing or two about how to stand on his own two feet in a foreign country. In other words, travel, especially by those with nationalist political leanings and a comfortable sense of belonging to one’s homeland, can breed knowledge and compassion.

Mari’s explanation recalls an interview with Abderrahmane Sissako, conducted for the DVD release of Waiting for Happiness, in which the Mauritanian filmmaker claims that “humanity is the fruit of travel and encounters,” and encourages Europeans to ask not what immigrants are going to take from them, but what immigrants can give to Europe. At its smartest, The Citizen taps into such logic by seeing Wilson and Shirin as generous contributors to defining a new Europe, one further untied from its colonialist past.

However, the film’s screenplay adheres too rigidly to news-cycle replications of barbaric governmental acts, and without putting them into greater perspective. When deportation agents arrive at Wilson’s apartment to detain Shirin, leaving her newborn child’s fate in question, the audience is made privy only to the real-time horror of the situation. Likewise, when Wilson is confronted and punched in the face by Mari’s husband (Péter Barbinek) and son, the filmmakers envision the most explicit form of conflict as a means to set about resolving the narrative. In short, The Citizen stumbles when it loses focus on character specifics and merely indulges the obviously intolerable acts of racist violence and unfeeling immigration agents.

Crucial to Ali: Fear Eats the Soul’s social commentary is how Fassbinder feels the despair of his characters through remarkable static shots that use vibrant colors and orderly spaces as a counterpoint to the ugliness of racist actions. Vranik manages no such visual complexities, relying instead on handheld tracking shots that feel like yet another bid by a socially minded filmmaker to ape the style of the Dardenne brothers. Given the film’s functional editing and skeletal compositions, which hang on characters’ faces and bodies without developing a perspective beyond their basic responses to the scene at hand, none of cinematographer Imre Juhasz’s shots linger in the mind’s eye, meaning The Citizen’s power remains limited to its admirable politics.