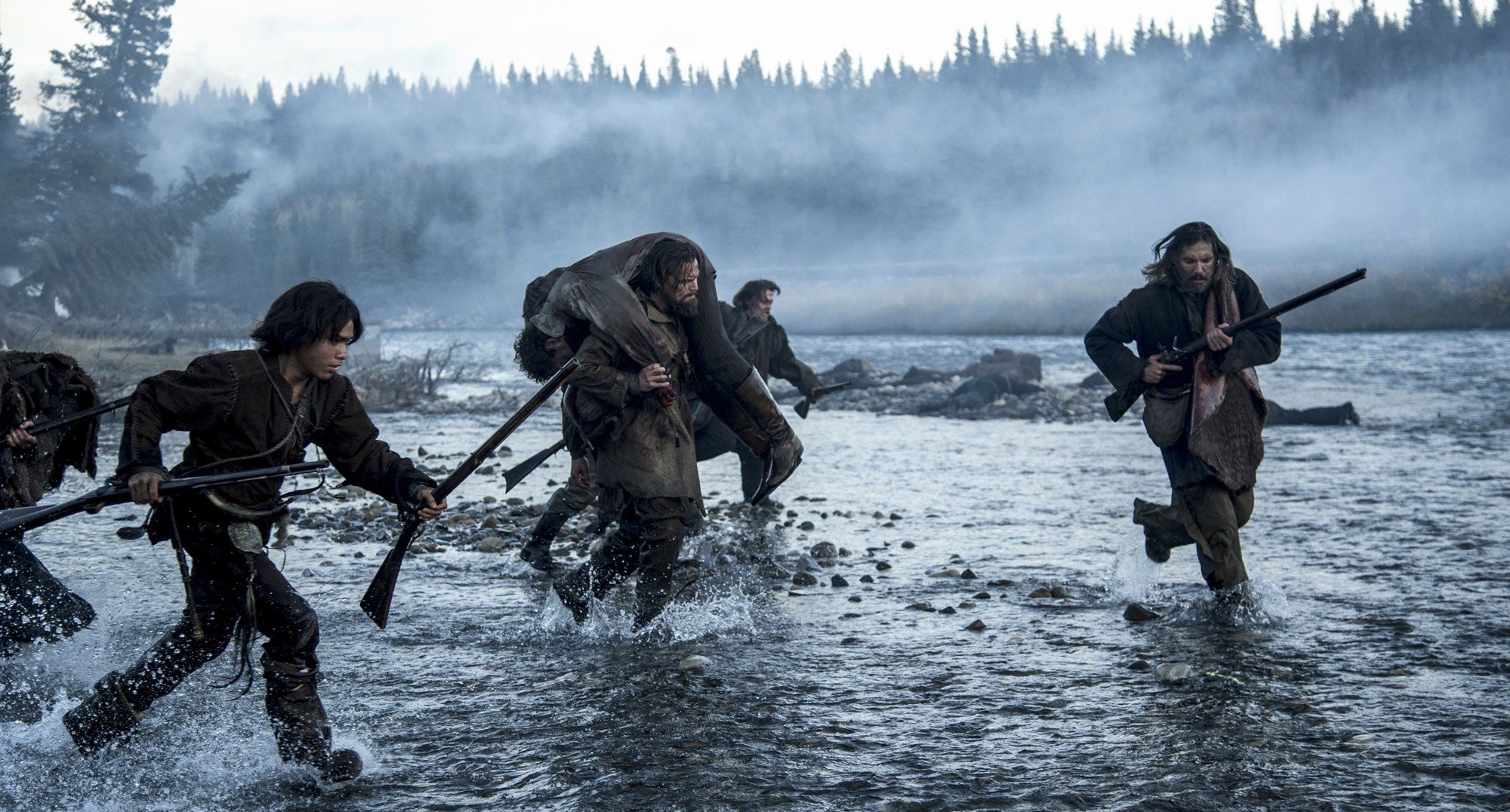 Following the atypically genre-derived but typically showboating Birdman, Alejandro González Iñárritu returns to something like old habits with The Revenant, a misery-fest that plants its narrative flags as carelessly as a Roland Emmerich blockbuster, guaranteeing us a viewing experience almost as arduous as the trials depicted on screen, before reaching a conclusion that’s sealed the moment audiences first meet the key players.

After an obligatory false calm, The Revenant’s proper opening scene is a show-stopping massacre at a fur-trapper’s campsite. It’s the kind of thing Howard Hawks would have handled—and did, in The Big Sky—in under 90 seconds, with mostly off-camera particulars and minimal effects, but González Iñárritu forces it to resemble the Normandy Beach sequence in Saving Private Ryan as much as history or sense will allow, and then some.

The next major set piece—the film’s inciting incident, at least script-wise—depicts Leonardo DiCaprio’s bearded tracker Hugh Glass’s near-demise at the paws of a wild bear that takes him for a threat to her cubs. The scene is the finest in González Iñárritu’s career, not so much for the verisimilitude that’s become the weary hallmark of his micromanaged direction, but for the event’s strangeness. The bear’s behavior, unlike that of the film’s human characters, is a composite of instinct and animal mystery, now and again seeming to forget the wounded Glass as it wanders, bored, a few yards downstage, perhaps not equipped with object permanence.

There’s even a moment of uncertainty as to whether the bear knows what she’s doing when she puts a paw on Glass’s head and presses down, hard, and drools on her victim. For five minutes, we forget how many weeks or months’ worth of painstaking CGI design and rendering must have gone into the sequence, and González Iñárritu achieves something that’s been denied him his entire career: His tiresome industriousness takes a powder, leaving a first-class illusion to operate on the viewer without apparent intervention.

Following this bravura moment, it’s business as usual. The incapacitated Glass, who’d conveniently made lifelong enemies with John Fitzgerald (Tom Hardy) moments earlier, is left for dead first by his company and then by his keepers: his son and Fitzgerald, the latter soon murdering the former. Haste makes waste as Fitzgerald is obliged to flee the scene before seeing the assassination through, and before too long (or, in the case of this movie, after far too long) Glass is on the mend, and in hot pursuit.

Not satisfied with fire-heavy dream imagery indicating Glass’s phoenix-like ascension from presumed death, González Iñárritu doubles down on his rudimentary grasp of visual metaphors with a straight-faced update of the birthing gag from Steve Oedekerk’s Ace Ventura: When Nature Calls. Glass takes shelter in a womb-like carcass, then emerges in the sun-dappled melting ice of the spring sun—itself yet another renewal/rebirth image—in an unmistakable out-of-the-womb visual.

The Revenant is, in many ways, a departure from González Iñárritu’s usual product; when he teamed with screenwriter Guillermo Arriaga for his first three features, he risked being typecast as the director of grueling, hyperrealistic melodramas with fractured, Möbius-strip timelines. Subtracting Arriaga brings the director’s weaknesses into sharper relief: Co-writing this time with Mark L. Smith, he regards story and screenplay only as pretext for his cockamamie notions of visionary filmmaking. Listen closely, and you’ll hear dialogue that wouldn’t cut it on a History channel original series.

But credit the filmmaker for shrewdness. Teamed again with one of our greatest living DPs, Emmanuel Lubezki, The Revenant lacks not for ambition. Distinct from González Iñárritu’s previous features, what’s on display here is an almost comfortingly old-fashioned sense of screen scale. If, in the junk drawer of the director’s skill set we can extract the most basic, lizard-brain appreciation for depicting the forest primeval in majestic, widescreen images, it might not be redemption, but it works often enough as a painkiller.

Sadly, like Fitzgerald and destiny, the film can’t escape its own deadly script. Somewhat analogous to Paolo Sorrentino’s Youth, where rich imagery and lithe camera movements are thwarted almost at every turn by unconvincing details and leaden dialogue, when characters open their mouths to speak González Iñárritu and Smith’s dialogue, the whole soufflé collapses. Fatally, the film can’t be seen outside the context of its Oscar ambitions, and with those perceptions clear, it appears exactly as it is: naked, feeble, encrusted in community-theater makeup and an abundance of languorous interludes, all in concert to indicate capital-I importance. That The Revenant is egregiously overlong is almost beside the point; audiences will manage their expectations in that regard. What pushes the film, at long last, into the icy river, is its very design, as a monument to slick, mercenary grandeur.

Review: Boy and the World