After a series of bit roles in television and film throughout the aughts, Dave Franco won himself a breakout role in Phil Lord and Chris Miller’s 21 Jump Street that seemed to prime the actor for a future as the star of many a stoner comedy. And while he has memorably flexed his ad-libbing skills in comedies such as Neighbors over the years, the actor’s recent work—most memorably in 6 Balloons, alongside Abbi Jacobson, and Joe Swanberg’s HBO series Easy—points to his desire to stay ever-changing and not limit himself.

Now, with The Rental, the 35-year-old actor adds director to his list of credits. Co-written with Swanberg, the film finds Franco drawing inspiration not only from many a horror classic, most memorably John Carpenter’s Halloween and Stanley Kubrick’s The Shining, but also from the directors he says he’s been lucky to have worked with over the years, including Barry Jenkins, Noah Baumbach, and his older brother, James Franco. The Rental is a slow-burn horror thriller about a weekend vacation that goes awry when two brothers and their significant others rent a seemingly perfect Airbnb property somewhere along the Pacific Coast.

Shortly after The Rental premiered to more than 1,300 guests at the Vineland Drive-In in Los Angeles, I had a chance to speak with Franco about shooting of his film, collaborating with Swanberg and his wildly talented cast, his future directorial ambitions, and more.

Is there a specific inspiration for The Rental?

The idea was inspired by my own paranoia about the concept of home sharing. The country is as divided as it’s ever been, and no one trusts each other, yet we trust staying in the home of a stranger simply because of a few five-star reviews online. And in reality, while we were shooting the film, there were new articles coming out every week about homeowners with hidden cameras in their place. And I still use all of the home-sharing apps. In fact, I stayed in an Airbnb while shooting the film. I was trying to explore this disconnect where, even though we’re all aware of the risks of staying in a stranger’s home, we still do it. Why do we subject ourselves to that knowing we’re potentially putting ourselves in danger?

How did you end up working with Joe Swanberg on the film?

I wanted to write the film with Joe because his main strengths lie in characters and relationships. Our goal from the beginning was to create a tense relationship drama where the interpersonal issues between the characters were just as thrilling as the fact that there’s a psycho killer lurking in the shadows. At its core, the film really is about these characters and their relationships, and then we sprinkled a horror element on top to help accentuate the problems that they’re going through. But when there are issues in your own romantic relationships, that can be as scary as anything else, even physical danger from a psycho killer.

What directors stand out who may have helped you the most in terms of taking the leap from actor to feature film director?

I’ve been lucky enough to work with a handful of really, really great directors—people like Barry Jenkins, Noah Baumbach, Seth Rogen, my brother, Phil Lord and Chris Miller—and the biggest thing I took from that whole group of them is, in general, they all create very safe, comfortable environments on set where they really encourage everyone to voice their opinions if they think that it will help the film in any way. And so, essentially, there are no egos on set and the main rule is the best idea wins, no matter who it’s coming from. I definitely tried to adopt that mindset for my film as well.

You immediately establish tension between the two brothers with an allusion to a possible infidelity, and this tension methodically builds to a breaking point. I know you’re a fan of clever genre films, so I’m curious whether there are any ones in particular that inspired you to capture that tension on screen.

Ari Aster, Jordan Peele, Sean Durkin, Amy Seimetz, David Robert Mitchell, and Jeremy Saulnier are all making projects that are so nuanced and atmospheric. Their films take their time to creep up on you, as opposed to a lot of horror films that rely too heavily on cheap jump scares and, ultimately, feel disposable. I was lucky enough to convince Sean Durkin to produce my film, and he ended up being somewhat of a mentor to me, giving me the confidence to make a horror film that didn’t have many jump scares. He would remind me that we had a compelling story and there was enough inherent tension between these characters that we didn’t need to push the horror, that it was all simmering under the surface and that we could just let it build and naturally come out over the course of the film.

Your wife, Alison Brie, appeared in Scream 4, so it was great to see her working again in a similar genre because, though it’s a slow burner, The Rental is a slasher film. I’m curious about your process when it came to curating this particular cast of actors.

Alison has a blast jumping back into it and letting go. I’ve obviously always known that she’s an incredible actress, but when I was in a position where I was watching her intently for five straight weeks, I realized that she’s one of the best. She’s so unique in her ability to balance heavy drama with moments of levity, sometimes within a single scene. And, so, it was a pleasure for me just to see her in that light and just kind of spend time with her in that way. It just continued to develop an even greater appreciation for each other.

Regarding Dan Stevens, I’ve always loved him as a performer, especially when he’s working in the genre arena, as in Adam Wingard’s The Guest and FX’s Legion. But in those projects, he’s playing characters who are slightly heightened, so I was excited to see him in a role that felt a little more grounded and human. And one of his best skills is that he’s really incredible at playing slightly villainous characters, where there are certain actors who play villains and audiences immediately turn on them when they start to make unethical choices. But Dan has so much fun with these types of roles—he really relishes in them—and as an audience, you can’t help but root for him, even when he’s making horrible decisions.

Sheila’s mainly known for her work in Ana Lily Amirpour’s A Girl Walks Home Alone at Night, where she plays a vampire. And she’s incredible in that film, but she’s not able to emote very much because that’s not what vampires do. I then saw her in Jeremiah Zagar’s film We the Animals. She’s only in a supporting role in that film, but she’s able to bring so much soul and compassion to her character in a finite amount of screen time. And after seeing that, I knew that she was perfect for Mina. She has this inherent strength to her, but she can also show such a vulnerability when the scene calls for it, and that was the perfect duality for Mina, who’s very strong-willed but who can crumble at any moment.

And then, finally, Jeremy Allen White is mainly known for his work on Shameless, and I’ve admired him from afar for a long time. He has this raw energy that feels unpredictable yet extremely down to earth. And the character of Josh is difficult to pull off because he has this rage inside of him, but at the same time he’s very delicate and in touch with his emotional side, and I think Jeremy is one of a handful of actors who could pull that off.

The film was timely when you wrote it, but even more so now with the pandemic, civil unrest, and unprecedented political corruption. It may resonate even more with audiences now. Who could’ve anticipated that?

Exactly. Sometimes a film’s success really revolves around the timing of when it comes out.

Are you already thinking about your next feature?

Yeah. I have a pretty strong idea for a sequel to this film, if I am lucky enough to have the opportunity to carry on with the story. And in addition to that, my wife and I have written a romantic comedy during the quarantine that I would direct and she would act in. It’s a slightly elevated version of the genre, and it’s inspired by such classics as Rob Reiner’s When Harry Met Sally and Nora Ephron’s Sleepless in Seattle.

Review: The Rental Is Scarier Before It Becomes a Conventional Shocker 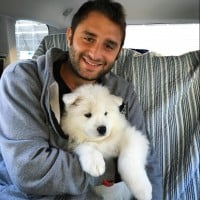 Alex Arabian is a film critic, journalist, and filmmaker. His work has appeared in the San Francisco Examiner, The Playlist, Film Inquiry, Awards Circuit, and Pop Matters.