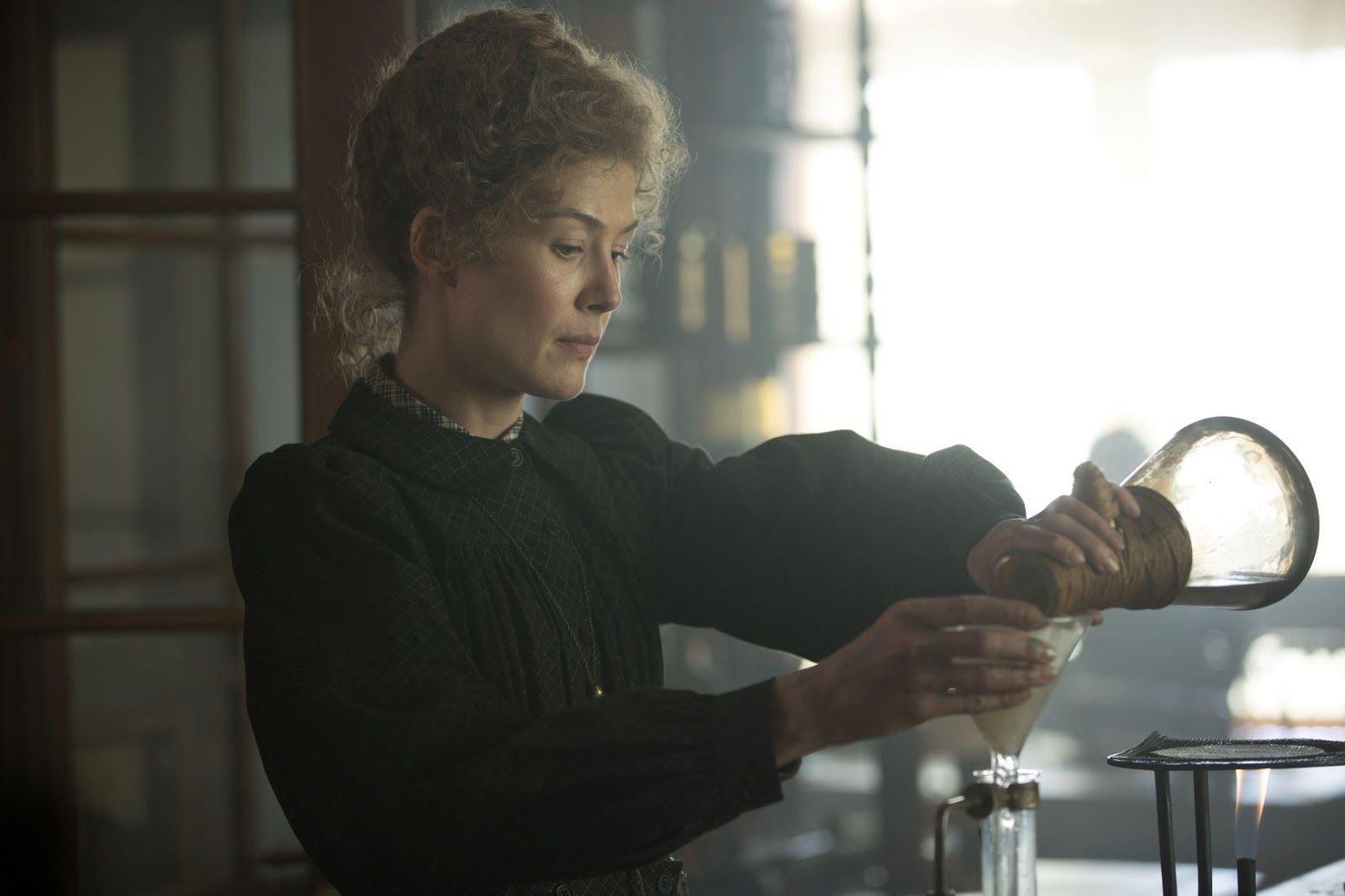 Marjane Satrapi’s Radioactive, an adaptation of Lauren Redniss’s 2010 book Radioactive: Marie & Pierre Curie, a Tale of Love and Fallout, is a biopic about a heroic historical figure who battled the prejudices of her time to ultimately change the world. But while that description might conjure up memories of somewhat square award-hungry films like Morten Tyldum’s The Imitation Game, this isn’t a historical story that remains safely locked in the past, as the restless energy and playful inventiveness that Satrapi brings to her film keeps it from fitting so easily into any particular category.

Rosamund Pike stars as the Polish-born Maria Salomea Skłodowska, who moved to Paris in the 1890s to pursue her education. Following a framing sequence in which the elderly scientist is taken to a hospital in 1934, the film shows her as a bright and prickly researcher being kicked out of a Parisian university by an administrator (Simon Russel Beale) who huffs and puffs about her impertinence. Not long after, she’s courted by another researcher, Pierre Curie (Sam Riley), who knows the right way to flirt with such a focused and intense personality: “I read your paper.” Taken to see Pierre’s gloomy lab, she pronounces it “basic,” but with her customary air of slight perturbation, she agrees to work there and soon marry him.

The actual work that Marie and Pierre get up to in that lab is dispensed with in a few brisk descriptions and the type of explanatory narrated animation sequences that CSI made a cliché years ago. In what looks like a deliberate choice on Satrapi’s part, she emphasizes the intense physical labor involved in the Curies’ search for what causes radiation to emanate from uranium more than their intellectual theorizing. Marie had to crush tons of pitchblende (a uranium-rich ore) by hand and mix it with noxious chemicals before studying the extracted material with Pierre’s electrometer. In relatively short order, the wife-and-husband pair announce that they’ve discovered not one but two new elements: radium and polonium.

The way the film tells it, fame came easy for the Curies. In one initially comic yet foreboding scene, Pierre shows Marie a series of commercial products wanting to cash in on their glowing discovery: radium matches, chocolate, and even chewing gum. However, that acceptance was likely because the sexist scientific establishment could better stomach Marie’s seeming impertinence (“I’m going to prove them wrong, just like Newton did”) when she was paired with a man, and soon turns against her after a tabloid scandal reminds the French that she’s a foreigner. Although Marie bristles at being looked over—raging in one scene at Pierre for accepting the Nobel Prize in his name only—the film steers away from such considerations toward the smoldering intensity of the Curies’ intellectual and emotional romance.

With Anthony Dod Mantle’s lushly luminous cinematography at her disposal, Satrapi gives her story a fantastical tone that resonates well with Marie’s brooding and inward-looking personality. A beautifully prismatic rendering of Loie Fuller’s “Fire Dance” at the Folies Bergère helps illustrate the richness of Marie’s thinking. In a daring dramatic choice, after the Curies become famous and start looking for uses for their discoveries, the film drops in flash-forwards that illustrate the results of their research. These short segments show everything from a Cleveland hospital in 1957 where a boy with cancer receives radiation treatment to the bombing of Hiroshima, a Nevada atomic bomb test, and the Chernobyl meltdown. Each are beautifully composed, dreamlike interludes with eye-popping colors so over-saturated that they verge on the nightmarish (one scene in a fake suburb built to be annihilated in the bomb test is so garishly colored it feels like the filmmakers are trying to one-up Tim Burton).

But while those moments bring to the film a dynamism and relevance that many historical narratives lack, they also come at the detriment of the primary plotline. Pike and Riley are convincingly enraptured with each other, but the thin and repetitive nature of Jack Thorne’s script becomes more glaring as the Curies’ relationship advances and the poisonous effects of their exposure to radium takes a vicious toll on their bodies. A dose of the tangy humor and cynicism that enlivens Satrapi’s graphic novels could have brought some life to the somewhat moribund last third of the film in particular. While its inventively unstuck-in-time structure dramatically refracts Marie Curie’s discoveries into the 20th century’s many technological horrors and glories, Radioactive ultimately fails to make her story a very human one.

Interview: Dave Franco on The Rental, His Genre Influences, and Future Projects

Review: The Rental Is Scarier Before It Becomes a Conventional Shocker