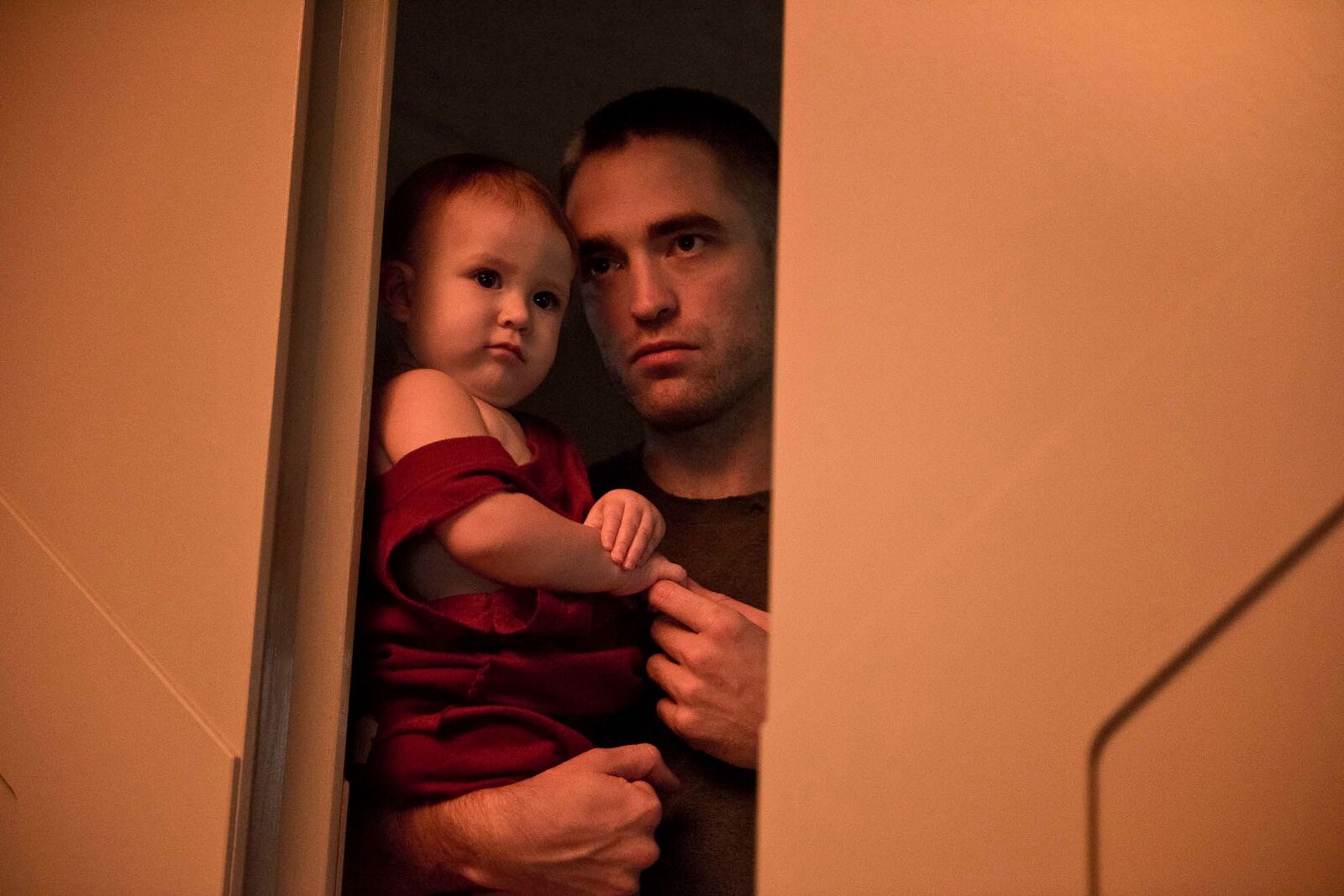 Like her films, Claire Denis’s bond with Robert Pattinson defies familiar categorizations and feels forged from deep, profound emotion. It doesn’t appear to be maternal-filial, and Denis’s willingness to let her star make discoveries with a long-gestating project like High Life suggests it’s not strictly professorial. Denis and Pattinson resemble colleagues who’ve become great friends through collaboration. Pattinson’s talent for conveying repressed desires translates well to playing a quintessentially paradigmatic Denis protagonist, an inscrutable loner who teeters tenuously on the brink of transgression.

While each admired the other’s work for several years—Pattinson since he saw her White Material, and Denis since catching him in Cosmopolis and the Twilight series—their partnership on High Life arrives at a fortuitous moment for both. The film cements Pattinson’s status as one of the decade’s key figures in auteurist cinema and reaffirms Denis’s status at the vanguard of global filmmaking. And A24’s distribution of the film will help to ensure that she finally receives a release on a scale commensurate with her craft.

On the day of High Life’s American release, I talked to Denis and Pattinson jointly about the journey to bring the project to the screen. We began at the fateful night when Pattinson stumbled upon Denis’s work and talked through how his character, Monte, an ascetic prisoner tricked into a mission to harness the energy of a black hole, progressed from Denis’s imagination to Pattinson’s realization.

Robert, you’ve mentioned White Material as your entry into Claire’s films. What about it drew you to work with her? Were your impressions of how she worked with actors to inhabit their physicality and drop their self-consciousness accurate?

Robert Pattinson: When I watched White Material, it was on at two in the morning in Louisiana. I was shooting the last Twilight movie, and I had been asleep when I woke up, and the film had already started. It was really unusual for the film to be on that channel in the first place. And to wake up to it—it sort of felt like transitioning from being in a dream to being in the movie. I just remember the image of Isabelle Huppert holding onto the back of the truck. It’s just such a striking image. It’s weird, but it almost makes more sense now, to show the strength of her femininity. It’s not like she’s wearing armor trying to look like a guy, but she looks so powerful as her skirt blows up in the wind behind her. You could see there was something going wrong, but the expression on her face—you know immediately that she’s a dynamo. I just love that performance.

I remember sending an email to my agent that night at four in the morning saying that Claire Denis is “the one.” I talked to someone else, and they were like, “Claire has done loads of movies, what are you talking about?” But there was something about it that felt new. There was something about it, the performances first, that made it feel like it had to be made. That’s what I look for in directors.

Do either of you see any similarities between Maria Vial in White Material and Monte in High Life? They both hold onto their bodily autonomy and space with such intensity.

Claire Denis: They both have a child!

Pattinson: I guess there’s an autonomous thing where they make themselves exist in a slightly separate reality to everyone else around them. I think Maria is more connected with her environment. They definitely have something slightly missing. I was looking at this thing yesterday, giant wave surfers in Nazaré, these Portuguese surfers. These guys surf 150-foot waves. I saw one interview with a guy, who’s got a four-year-old son and a girlfriend, where they’re looking at these waves the size of mountains, and he’s like, “It looks like a good surf today!” And his son is looking at him. Some of these people have completely different mental setups. It’s exciting to see something which is like, “You’re gonna die.” Sorry, that’s not particularly relevant!

Denis: No, it’s not irrelevant! I’m interested in people who surf. I’ve seen one of these waves, in Tahiti. I saw it for real and thought, “How could people believe without doubt that that’s a great thing to do?”

Denis: I was so amazed. They were there waiting, and they looked sane. They didn’t look crazy, you know? They looked excited, happy. So, I think you have to be like—I think Isabelle, if she would have decided to be a surfer, she would have been a crazy surfer! She’s really enjoying a certain type of danger, you know? As opposed to her, Monte decides not to stay in jail, to take this offer and mission to be left in peace. Just to be, I don’t know, maybe he has some hope. But it’s not only a question of hope. It’s a question of “will I be better there than this horrible corridor.” It’s not exactly the same heroic person, I don’t think, but maybe the same craziness. No, I think Maria is more crazy. She’s really completely crazy.

The role of Monte was originally envisioned for someone older, perhaps even Philip Seymour Hoffman.

Pattinson: There’s this thing where, when we were talking about Monte, there’s something about him where if it was an older guy, you reactively become someone who has nothing to live for. But I think Monte is trying, forcing his life to be the same every day. He’s like, “I want to wake up and feel nothing. Figuring out how to get rid of anything that is alive, basically. Alive in me, anything which can feel alive.”

Denis: But it’s really something like a Tibetan monk to get there. To this place where you need nothing.

Yeah, like the “chastity over indulgence” line. Did the role move more toward Robert, or did he adapt himself to play someone who fit the character as written?

Pattinson: Toward me as a person? I’m definitely indulgence over chastity! [laughs]

Denis: You changed immediately, I think.

Pattinson: I remember being in my hotel room—my weird hotel room that looked like a strip club with these weird green lights in the bathroom—not really knowing what I was doing at the time and not thinking of my lines. I have these weird videos on my phone where I’m trying to manipulate my body into strange shapes. Maybe it was just a completely random thing, but I think Monte is trying to get some kind of control over his body, so I wanted to dig inside myself or something. As soon as we got on set and did the lighting test, it was almost immediate: I knew there was something with the costume that made me want to do a sort of boxy thing. I wanted it to feel heavy. In the first test, I realized there was a different way to my walking.

Denis: I saw you change. I saw you transform. I didn’t understand how you were working, but I saw how different you were when we started shooting. I remember the scene where you’re shaving. That was something that came from you. And I liked that so much.

So for you there was more of a physical entry point into the character as opposed to a more emotional and psychological one?

Pattinson: [hesitates] I wanted to do the shaving where he didn’t want to have any hair. And I wanted to convey this constant fear of people touching me or having any kind of physical contact with me, of retreating inside myself. So, I guess it was a physical thing. I wanted to feel alien even to myself. You’re looking to play things in a way that don’t make sense to you.

Claire, given the frequency with which you portrayed post-colonial Africa, did space hold any of that same fascination for you given the long history of nationalistic conquest over the world above and around us, the way a wealthy society exploits marginalized people to have boundless resources?

Denis: Yeah, probably. I say “probably” because I do want to express things I feel, but I’m not a professional activist. I think I’m a very naïve person, honestly. No, it’s true! [laughs] I believe in one thing, and I try and translate that into film.

High Life ends on a moment that felt, at least to me, similar to Beau Travail in the way that they seem to exist in a totally separate plane of time and space from the rest of the film. Claire, what draws you to these fleeting final moments?

Denis: It comes from a different place. The ending of Beau Travail was in the script, of him with the gun and laying down on the bed. It’s his death, you know? He’s committing suicide. And the dance scene is from before, when he was leaving Djibouti. But when we were in the editing room, I thought, “I can’t finish like that, it’s too sad. I want him to be somewhere in another world dancing forever.” So we changed it. And in High Life, I thought they were going somewhere, and that somewhere was mysterious—a place nobody has been before. But it doesn’t mean to me that they’re dying. They’re reaching a place no one has been before. When Monte says to his daughter, “Shall we?,” to me it doesn’t mean “Shall we die?”

Pattinson: “Shall we?” is what you ask when you’re about to dance with someone.

Review: Stockholm Is Held Hostage by Its Maker’s Double-Edged Sword