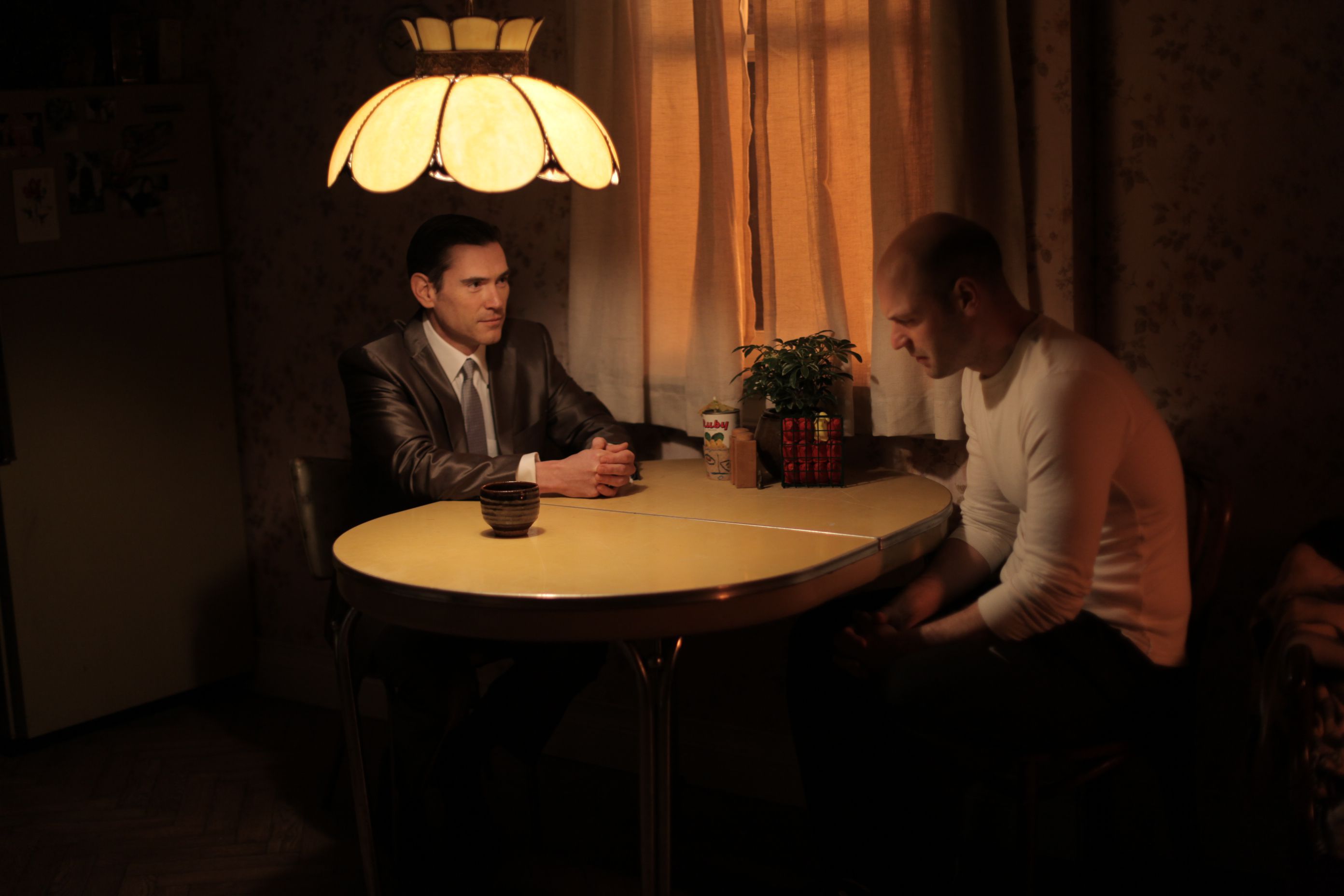 Billy Crudup may have had some breakout roles in Without Limits and Almost Famous, but this handsome leading man is best utilized as a scene-stealing character actor. In Glass Chin, written and directed by Noah Buschel, Crudup stars as J.J. Cook, a gangster who manipulates a down-on-his-luck boxer, Bud, played by Corey Stoll. In a silver sharkskin suit, Crudup staggeringly imbues his character with a quietly powerful control that’s at once seductive and sinister. The actor is also showcased well in the upcoming The Stanford Prison Experiment. As Dr. Philip Zimbardo, he plays the mastermind professor behind the title experiment in which students play prisoners and guards before things quickly devolve. Unflinching in his determination to see the experiment play out, Zimbardo’s behavior is questioned by the students, his colleagues, and his lover (played by Olivia Thirlby). Slant had the chance to speak with the actor about his most recent roles and what draws him to playing amoral characters that abuse power.

Glass Chin is very theatrical. I was struck by the cadence of J.J.’s speech, and his facial expressions, especially when he’s shot in extreme close-up. How did you find the rhythm of the piece?

The way that Noah writes J.J., and he’s not afraid of writing eccentric characters, is particularly self-conscious. He’s like a cult leader. He has a sense of being above the fray and manipulating people, using his power, to fashion his own myth of himself. He speaks in a kind of exotic way. You have to make a choice as an actor to gain possession of it, so you utilize words. He wasn’t afraid of being eccentric, and a leader.

That silver suit is very much the “aluminization” of J.J. What can you say about him being so smooth? He describes himself as a “server to hell” and wants to “own” people. What was the key to finding his ruthless, amoral personality?

One of the approaches I’ve learned, or developed, or practiced, is that these are characters I can relate to—feeling disempowered, or of lower status. It’s a question of transposing that. His behavior and pantomime of manipulating people is from feeling underprivileged and underappreciated. He had an intelligent mind, and that can contort sometimes. I like that. I don’t like playing someone who’s ruthless for the sake of being ruthless, or someone maniacal where I can’t pinpoint the structure behind their behavior. With J.J., I could put together how he found himself in this lifestyle, and for me it becomes an opportunity to explore what that might be like and that’s interesting—something so far out of your reach. When I put on the suit, I was like, “Fuck, yeah, I want to play this!” My whole sense of self changed immediately.

You tend to excel in character roles like J.J., or even Philip Zimbardo. What’s the appeal of these parts versus leading men?

Since I’ve started acting in college, the parts that spoke to me, and that I felt I could be the most creatively alive and ambitious with and make the best set of my skill set, are these character parts. Typically, the leading man roles are predictable and you can rely on a familiar archetype. I’m too weird to do that stuff. I don’t manifest those choices in as interesting a way. It comes across as a cipher, so when I have nuance and texture, I feel more effective.

Why do you think you are typecast in such supercilious characters?

In some respects, you’re a product of the first couple of things you are cast in. In Without Limits and Inventing the Abbots, I was an arrogant, cocksure leading man, and that informed a lot of the opportunities I’ve got. I’ve had fun playing parts like Jesus’ Son; he’s a guileless, curious, open, clumsy lover of life. I revel in those parts. But unless you manufacture your own work, you take what you are given and make the best choices.

J.J.’s power animal is the snow leopard. Do you have an animal you identify with?

It’s for sure the monkey. I’m a goofball. I’ve always been the chimp. A bat, sometimes…

J.J. is very much about art and music—Warhol and iClouds. He likes heroin chic. What do you consume?

At the moment, baseball and music. After making Almost Famous, it’s been very difficult for me to get out of classic rock. I’ve been subjecting my son to Led Zeppelin for 11 years now, whether he likes it or not. I love rock n’ roll, from Ryan Adams, Alabama Shakes, and the Strokes to more punky rock bands. I grew up listening to R&B and Motown, so those are the kind of things I typically consume, but after Rudderless, I’ve been playing a lot of guitar myself, trying to play and sing at the same time. I’m good at faking it, but not so much doing it, so I’m trying to improve my musical skills.

What can you say about J.J.’s or Philip’s hubris? These characters like to play God and abuse power. Zimbardo’s goal in The Stanford Prison Experiment was to strip away the individual. J.J. does the same thing to Bud in Glass Chin. What can you say about destruction of human behavior in these films?

We live in a hierarchal society where your status is defined by your ambitious and what you’ve been able to attain. It’s infused by all of us. Your value as a human, individually and as a community, is how you stand with respect to power and whether that’s money, intelligence, or violence. Our capitalist system leads you in that direction. It’s a part of our culture and our heritage that we have to confront, and it doesn’t always have a winning side—someone struggling from being impoverished to having success and having a healthy life. There are more complicated components. I revel in the opportunity to explore those things, and J.J. and ZImbardo are both guys who understood that. Zimbardo studied it in his job as a teacher, as if that makes it a safer environment. Some folks think that makes him more diabolical, whereas J.J. is an outright thug. But J.J. studied human behavior and developed his own power. He lived the American dream; he came from nothing and now is a man of power and prestige and culture, and it’s interesting to put such an ugly face on that ambition.

Glass Chin is about a “past that is not yet finished” and a character who might “win more by losing.” Zimbardo tests and studies people’s actions and reactions in a controlled environment. What are your thoughts on responsibility for one’s actions?

I think J.J. is completely disinterested in that. His world is Lord of the Flies: If you can’t take care of yourself, go fuck yourself. Zimbardo wanted to quantify and understand cause and effect, and he was concerned with the nature of how the experiment affected the students. I think he still is. He contends to this day, by and large, that people weren’t traumatized or injured by it, but mistakes were made. There’s a prevarication. My feeling is that we have to take responsibility for our actions, and do the best we can to understand and articulate who we are. We must live with our mistakes and atone for them, and appreciate that in others as well, since we all have the same right to stumble through life. I want to grow and change and learn, and every mistake is an opportunity for that.

What choice would you make if you were asked to participate in The Stanford Prison Experiment?

I don’t think I would have ever volunteered. I guess one of the things the film teaches us is that there are certain circumstances where it’s difficult to predict our behavior. Social context has a lot to do with what we describe as morality. You can’t predict what you would do. I have no idea what I would do, and that’s terrifying. You want to believe that in critical situations you would behave in a way that would represent the best of your morals. But human psychology is much more complicated than that. The only way to give yourself the best opportunity is to go in with that awareness.

Review: Into the Grizzly Maze