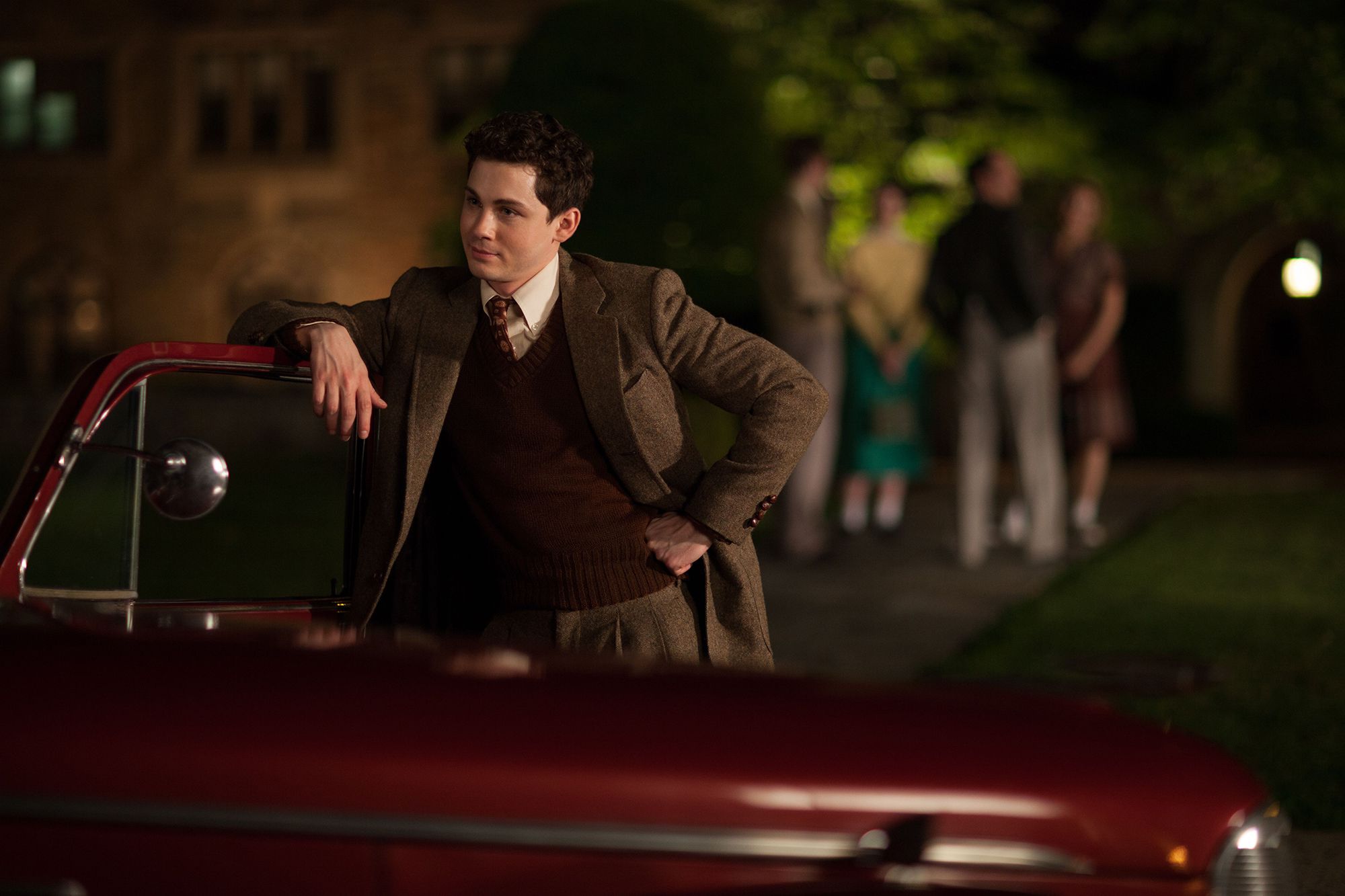 James Schamus’s Indignation takes place in a calculatedly stripped-down 1950s much like that of Carol, with non-glossy surfaces and minimal period furnishings. The connection isn’t serendipitous: Schamus’s career as producer and occasional writer (his primary career prior to this first directorial outing) includes three collaborations with Todd Haynes, one of which was Dottie Got Spanked, another resourceful recreation of midcentury America.

If Haynes’s early efforts allowed for stylistic excesses, however, Schamus is evidently more in tune with the unshowy classicism of Carol. Much of Indignation plays out in what looks like utilitarian institutional buildings still standing from the early 20th century that have been judiciously emptied of clutter, with the camera remaining stationary save for the infrequent deployment of psychologically or behaviorally motivated movements, and a plush orchestral score, courtesy of composer Jay Wadley, gently backing the film’s emotional undertow without ever bringing attention upon itself. It’s an aesthetic package as seemingly conventional as the Philip Roth-based source material, a bildungsroman about a college freshman by the name of Marcus Messner (Logan Lerman) whose evolution from wallflower to headstrong individualist is occasioned by his move from a staunchly Jewish borough of Newark, New Jersey to the Catholic heartland of rural Ohio.

Schamus’s debut feature is impressive for how its tamped-down style and the coming-of-age narrative work so confidently in tandem, with the filmmaking’s sedate professionalism increasingly reflecting a milieu in which decorum is paramount, and any behavioral deviation stands out. Marcus’s decision, egged on by his vigilantly cautious parents, to attend Winesburg College while his peers ship off to the Korean War is itself a deviation, and it sets into motion a slowly dawning realization for the young man to the limited pathways allowed by the conservative society he’s been raised in. If Newark feels to him like a hermetically sealed mini-universe lorded over by his paranoid father (Danny Burstein) and orbiting around only the prospect of the small-time family butchering business, then Winesburg, with its mandatory sermons and rigidly compartmentalized campus social groups, is just another trap.

Naturally, there’s a girl, a knit sweater-clad ray of sunshine by the name of Olivia Hutton (Sarah Gadon), whose beauty represents a kind of salvation for the film’s eager-to-escape protagonist, though the romance that develops between them is hardly pro forma. After a first date at a candlelit restaurant, Olivia’s ostensible goodie-goodie disposition is complicated when she suddenly fellates Marcus on the ride back to campus, an act depicted with a frankness rarely seen in films depicting this sexually repressed era. The complicated thicket of emotions that follows is tactfully underplayed by Schamus and his actors: First there’s confused silence, then an ambivalent goodbye, then, in the weeks following the incident, an unapologetic defense from Olivia of her own forwardness, a hailstorm of passive-aggressive judgment from Marcus’s pesky roommates, and an attendant round of self-reckoning for this previously virginal East Coast transplant.

Schamus’s screenplay, working off the foundation of Roth’s autobiographically tinged fictionalizations, is rich with culturally specific details that deepen these forking moral predicaments. The specialty of the aforementioned restaurant, for instance, is escargot, a delicacy whose alienness to Marcus triggers an exchange that functions as both an indicator of the drawbacks of his background and a sly hint toward his sexual naïveté. Soon after, through the hearsay of one of Marcus’s peers, we learn that Olivia is a child of divorce, and her subsequent all-or-nothing plea to Marcus, dictated by letter, seems borne of an inherited distrust of partnership. And through all of this, Marcus is being pestered by his parents over telephone to find Jewish friends and enroll in any Jewish-affiliated organizations on campus.

Though its tentative central romance is charged with feeling (Gadon, compressing her character’s maturity in a feathery vocal delivery and preternatural physical poise, is especially impressive), Indignation is as much about matters of developmental conditioning as it is about the primal emotions its story stirs up. That’s particularly apparent during a 15-minute tête-à-tête between Marcus and Wineburg’s long-standing president, Dean Caudwell, embodied in all his insidious eloquence by playwright Tracy Letts. Adlibbing off little more than a report of Marcus’s roommate troubles, the face of the university invites the student to his trophy-bedecked office to pry about the boy’s self-proclaimed atheism and other peripheral matters, like his refusal to try out for the school baseball team, an insinuating line of questioning that persists until it’s clear that nothing short of religious conversion will satisfy the man. The language here is as dense and quick-moving as in a Whit Stillman film (Marcus counters with his own hyper-articulate fury and citations of intellectual heroes), though instead of bringing laughs, the slant of the argument accomplishes the promise of the title.

Schamus doesn’t need to visually overemphasize Marcus’s righteousness; it’s a mark of the film’s sophistication that it’s impartial in its mise-en-scène (Letts and Lerman’s sparring match is covered in a ping-pong of single shots arranged nearly on the conversational axis), and leaves it to the viewer to sort through the issues implicitly raised in the dialogue. The meaning of American democracy becomes a temporary talking point when Marcus’s mother (Linda Emond) visits Wineburg and meets Olivia, and it’s clear that that this same topic is a guiding concern for Schamus. With Indignation, he’s fashioned a gutting melodrama that amounts to a screed against anti-intellectualism and conformity without irritably wagging fingers at human targets.