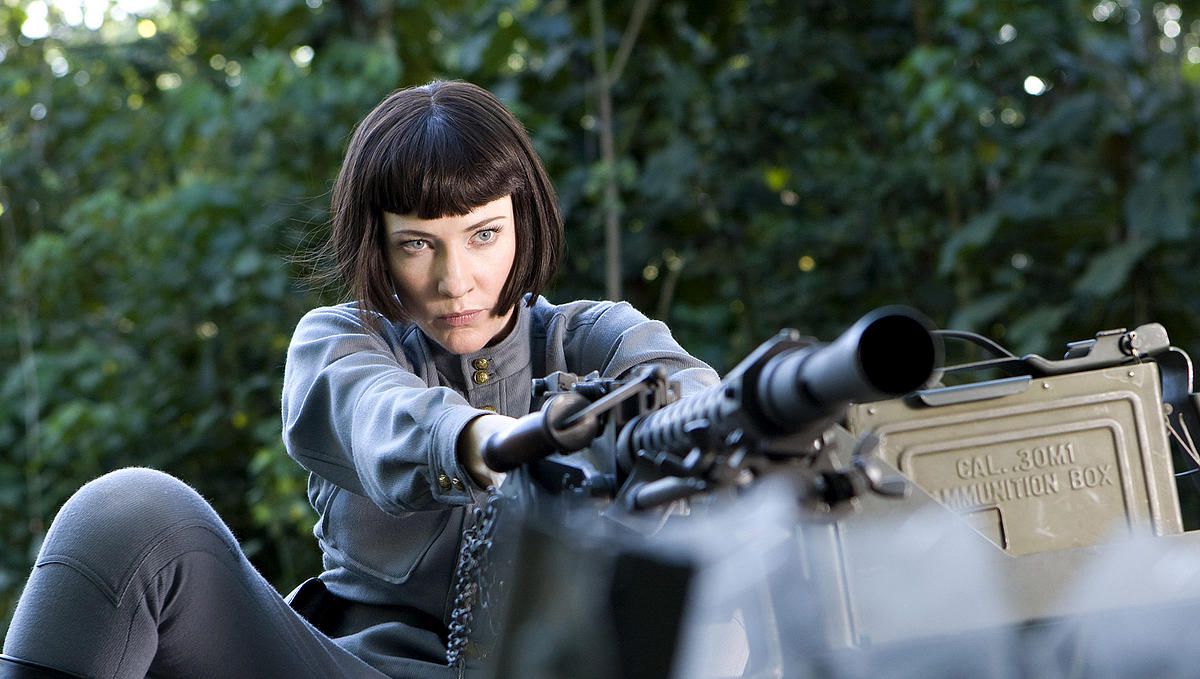 Although the title of Indiana Jones and the Kingdom of the Crystal Skull is imposingly big, producer George Lucas and director Steven Spielberg’s first installment in the adventure saga since 1989’s The Last Crusade is, in many respects, disappointingly diminutive. That smallness is most pronounced with regard to imagination, which is in short supply throughout this yarn involving Dr. Jones (Harrison Ford), here tasked with investigating an alien-ish crystal skull and its connection to the lost Mayan city of gold, El Dorado, in 1957. Nineteen years after finding the Holy Grail, the famed archaeologist and “part-time” professor is older but, frustratingly, virtually no different from the gallant man who rode off into the sunset at last film’s conclusion, save for the fact that, just as Ford’s irresistible on-screen charm has, during the past two decades, given way to humorless grumpiness, so too has Jones’s cocky rakishness been crushed under the weight of grouchy-faced wrinkles. First seen as a prisoner of communist Ruskies who want him to locate a mysterious object hidden in an Area 51 warehouse, Indy quips that escaping won’t be “as easy as it used to be.” Unfortunately, he’s full of it, as verified by his subsequent derring-do, accomplished with such cartoonish painlessness that one wonders if steroids have become the hero’s primary nutritional supplement.

This isn’t to argue that a 65-year-old Indy should be frail and feeble, but rather to demand that Ford’s advanced age—which has long made the sensibility of this sequel debatable—be addressed in more than half-hearted ways. That Indy hasn’t lost a step is an increasingly prominent facet of Crystal Skull, typified by a sequence in which he leaps into a car full of Russian soldiers and easily cold-cocks them all, though this vision of herculean strength has far less impact than a preceding image of a more vulnerable Indy jumping from a speeding car onto the back of a motorcycle and almost disastrously missing the mark. Nonetheless, whereas Indy still boasts the physicality of a 30-year-old, he now has the demeanor of a crotchety grandpa. What happened to the contagious intellectual curiosity and boyish enthusiasm that propelled his globe-spanning quests for mythological artifacts? In screenwriter David Koepp’s Cold War story, Jones—assisted, and then betrayed, by Ray Winstone’s bland sidekick Mac, and later accompanied by John Hurt’s wacko Professor Oxley—travels from America to the jungles of Peru in search of the titular item wearing the same furrowed brow and grimace, nearly all the self-deprecating humor and joy and diversity of emotion that made him a compelling spelunker replaced by sourpuss crankiness.

Crystal Skull combines the supernatural elements of Temple of Doom with the familial dynamics of The Last Crusade, and Lucas and Spielberg work hard trying to recapture the giddy, pulpy magic that defined their prior Jones escapades. Alas, there’s more zip found in Temple of Doom’s Shanghai nightclub opening than in this film’s entirety, as it struggles mightily to generate high-flying verve from scenarios that vacillate between moderately rollicking and derivative. This latter quality is particularly depressing—did Spielberg really think it inspired to stage a fencing-match variation of the car-straddling stunt from Footloose?—and is amplified by the fact that, instead of developing character relationships or concocting ingenious feats for Indy to perform, the director piles on allusions to the franchise’s previous entries. From the participation of Karen Allen as Raiders of the Lost Ark’s feisty Marion, to Indy quoting himself (“I think you just brought a knife to a gunfight”), to the sight of the Ark of the Covenant and hands pulling levers in cave holes, to the ooga-booga natives and Indy’s plummet over waterfalls, freak-out over snakes and wistful glances at pictures of dearly departed Dad, the filmmakers often reduce the entire affair to a “remember that?” trifle which places a premium on nostalgia over invention.

At times, Crystal Skull proves that it can classically rock, and an automotive chase through and around the Yale campus has some especially ecstatic get-up-and-go. As with Live Free or Die Hard, however, computerized spectacle undercuts one of the series’s basic pleasures: the woundable humanity of its protagonist. CG allows Spielberg unfettered creative freedom to stage whatever he pleases, but the result is that Indy is occasionally thrust into situations so outlandishly dangerous that his eventual survival becomes a joke. FX-aided craziness transforms him from a man into a superman, which means that it turns him into just another indestructible comic-book character—and that, in the end, isn’t much at all. Indy takes his fair share of punches, notably during a bout of fisticuffs while surrounded by giant carnivorous ants, but there’s no inkling that, even with the extra mileage under his hood, he’s anything less than unbreakable, or his success is in doubt. A predetermined happy ending is, of course, inherent to countless heroic stories like this. Still, Crystal Skull never comes up with a show-stopping moment—such as, say, Indy being trapped on a rope bridge over a grand canyon—that’s jaw-droppingly awesome enough to obscure the absence of genuine, the-bad-guys-might-win tension.

As it focuses on Indy’s partnership with a young Brando-wannabe greaser named Mutt (Shia LaBeouf), who, unsurprisingly, turns out to be his offspring, Crystal Skull stands as the latest Spielberg tale interested in fathers and sons. More crucial, though, is that it’s his most meager meditation on that topic to date, both narratively—Koepp’s script hardly tries to hide the kinship between its two main characters, and then barely exploits it—and visually. The director employs an inordinate amount of tight close-ups and medium shots that fail to provide the action with adequate breathing room, and the lasting impression is that Spielberg is attempting to mask the reality that large chunks of the movie have been filmed on blatantly phony-looking sets (the most egregious being a spooky cemetery) or on green screens. Whereas its predecessors conveyed expansive wonder and excitement, these proceedings feel constricted and, consequently, undersized. When Spielberg does sporadically aim for larger-than-life iconography, he triumphs—an intro silhouette of Indy donning his trademark fedora is fantastic, as is a panorama of the character gazing at a nuclear mushroom cloud. However, just as CG frequently renders set pieces rubbery and insubstantial, so too does the artificiality of many locations hinder any sense of sweeping, epic scale.

While Temple of Doom has long been derided (even by Spielberg himself) for its over-the-top fantasticality and hellish darkness, the film’s willingness to throw caution to the wind was enlivening. That admirable impulse sporadically pops up in Crystal Skull, but its manifestation is usually more embarrassing than thrilling, never more so than when, after becoming entangled in jungle vines, Mutt—embodied by LaBeouf with winning impertinence and pluckiness—gazes into the eyes of a monkey with a similar greaser hairstyle, then swings through the trees like a video game Tarzan, and then commands his new primate pals, apparently telepathically, to attack Russian villains. Psychic abilities certainly figure into the plans of dominatrix-ish villainess Irina Spalko (a pleasurably campy, if one-note, Cate Blanchett), who believes the skull will grant Mother Russia the power Americans fear most from communism: the ability to infiltrate both body and mind. Yet while this balancing of the supernatural and the historical is shrewd, equilibrium is a condition all too rarely achieved by the bloated Crystal Skull, which eventually sacrifices charming interpersonal drama—whether concerning contentious Indy and Mutt, or bickering Indy and Marion—at the altar of Lucas-style childishness (see: recurring animal reaction shots) and, worse, hackneyed science fiction that plays like Close Encounters of the Third Kind via Alien vs. Predator.