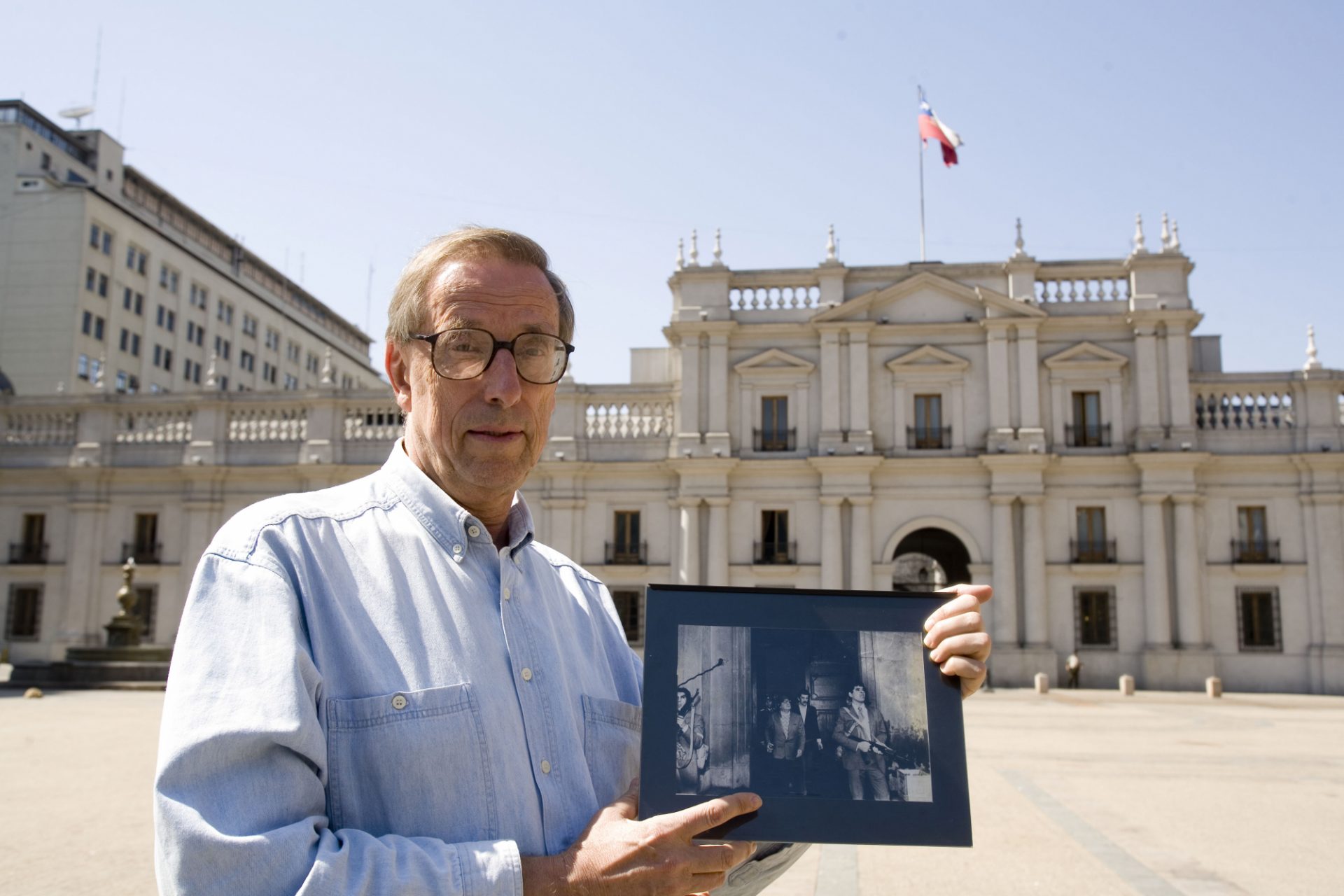 Peter Raymont’s documentary A Promise to the Dead: The Exile Journey of Ariel Dorfman, while not my top pick at the Human Rights Watch festival for mesmerizing subject matter (that would be Katrina Browne’s Traces of the Trade: A Story from the Deep North), nor for formal artistry (see Maria Ramos’ Juizo), does have something these other films lack—a famous North/South American, writer/exile (the film is partially based on Dorfman’s best-selling memoir Heading South, Looking North) whose Death and the Maiden catapulted him to fame. Think Salman Rushdie with a picture deal instead of a fatwa.

Now I’m not knocking the animated, somewhat Woody Allen-ish Dorfman, who comes across as absolutely sincere in his “promise to the dead,” the commitment he made to his murdered Chilean comrades, and to all his fellow countrymen who were “disappeared” under the Pinochet regime, that he would tell their tale. Indeed, Dorfman believes this is the sole reason that he, Cultural Adviser to the Chief of Staff under socialist president Salvador Allende at the time of the Pinochet coup on September 11th, 1973, was allowed to live. On the list to be called to La Moneda that fateful day (to be subsequently tortured and executed), Dorfman’s name was crossed off at the last minute—somebody had to bear witness, the man responsible for the action later explained. Dorfman, still haunted by not having martyred himself, spent three weeks in safe houses, eventually making his way to the Argentine embassy in the trunk of a car (Raymont lets us glimpse the beautiful, immaculately gardened grounds now as Dorfman describes how packed to the rafters with desperate people the building was in ’73) before being allowed to escape to Buenos Aires, his wife and young son safely with him. I believe Dorfman when he says that the freedom to live and speak out is not just a freedom—it’s a responsibility. I just question Raymont’s decision to trust solely in the viewpoint of a writer, whose suffering was mostly secondhand, to delve into the complicated depths of Chile’s 9/11.

For Dorfman, though an exile with not a trace of accent in either English or Spanish, has lived a remarkably blessed life compared to those he finds when he travels back to Chile with Raymont and his crew. The film begins with a photomontage of the missing, the words, “Donde estan? (Where are they?)” emerging on the screen to the soulful sound of a strumming guitar. Cutting between archival footage of Santiago in 1973 and present day, talking head interviews with the writer (who says that being part of history keeps him “jubilantly alive”), and Dorfman’s heartfelt reunions with his fellow revolutionaries, A Promise to the Dead is really a travelogue through time, one in which a gap between the still idealistic Dorfman (forever scribbling about the past) and his older, wiser, more pragmatic comrades who stayed behind is glaringly apparent. Writer exiles have to leave to write, but spend their lives pining to go back, Dorfman says, and yes, it is he who takes great pride in reenacting the glory days of Allende’s short-lived reign, who wants to face the photos of friends murdered, who wants to march in the streets enthusiastically singing the anthems. Dorfman’s friends seem happy to see him, though they’ve seen too much to share his youthful joy.

“Exile is like a journey into death—where you lose everything that gives meaning to your life,” Dorfman says, adding that leaving his buddies was as bad as losing both the revolution and Allende, a statement that strikes me as quite shallow in light of the near-genocide Pinochet inflicted, but at least he’s honest. Dorfman says that 9/11 brought back his own 9/11, the “missing” photos of the workers at the Twin Towers like a déjà vu of the “disappeared” in Chile. He felt compelled to return to Santiago “to see if there are lessons to be learned.”

I was at home in NYC on 9/11, though I never lost any friends. And even if I had, it would be quite presumptuous of me to claim that my experience of 9/11 was the same experience as that of my friend John who lost his older brother at the Trade Center. In essence, this is what Dorfman is doing by holding onto pain that doesn’t belong to him. It’s why Death and the Maiden, whose central conceit is the tortured living beside their torturers, became a hit everywhere—except in Chile where it was met with scathing reviews. A Chilean actress explains the reaction as “he put his finger in the wound,” struck a nerve in a country that wasn’t ready to deal with the past quite yet. That could very well be. But it could also be that Dorfman, who never endured life under the Pinochet regime firsthand, who left soon after the coup, hadn’t earned the right to be that finger.

In fact, Dorfman’s childhood was filled with secondhand tragedy. Though his grandmother from Odessa was Trotsky’s interpreter, his grandparents came to Buenos Aires to escape anti-Semitism. His professor father had to leave for the U.S. after Argentina’s unfriendly regime change, with Dorfman, his mom and sis soon to follow him to NYC. But McCarthyism once again put the family in danger (his parents were friendly with people in the Rosenberg circle, i.e., secondhand pals of Ethel and Julius) so they fled to Chile. The boy who had been “seduced by American media culture,” putting him at odds with his left-wing father, grew up to become the young man heady with the nonviolent, socialist, democratically-elected Allende revolution. Indeed, Dorfman’s first literary success was co-writing a scathing deconstruction called How To Read Donald Duck, which became an instant hit in Chile, even attracting the attention of Walt Disney himself, who offered to buy the worldwide rights (so he could suppress it, of course!) “We scared our adversaries—and our allies,” with radicalism Dorfman admits. He claims the violence that put Pinochet in power was a result of the Allende government being too tired to govern, the adversaries too exhausted to overthrow, resulting in a dangerous tension that led to the strongman’s coup. (As Dorfman and one of his friends recount this dark history in sunny Santiago, Raymont nicely cuts back and forth to the actual images they are recollecting.)

When Dorfman and his son Rodrigo visit his grandmother’s gravesite in Buenos Aires for the first time, a journey the writer had been avoiding all those years as he traveled the world organizing a “cultural resistance” to Pinochet, I wondered if perhaps the exile’s obsession with a past he never fully experienced was a way of evading his own real personal past. “Exile took all my shelters away from me,” Dorfman says, referring to this as a positive development. It made him a deeper writer and human being. But it also says volumes about the sheltered life he’d been living, always fleeing just before the storm’s damage could be absorbed.

Which is why it also bothered me to hear Dorfman say that the only center of resistance to Pinochet in Chile took hold at the sole institution with some degree of autonomy, the church (where people documented the missing)—then go on to describe himself as the place where the living and the dead could meet, another poetic way of saying he began to write when he “listened to the voices of the disappeared.” Their lives were taken from them—but so were their deaths! “Disappearing” someone is tantamount to erasing the meaning of his or her life.

O.K., but weren’t those at the church acting as “the place where the living and the dead could meet” doing all along what Dorfman says he himself was doing, albeit in their own less colorful way? Why does Dorfman single himself out as a “chosen one” when there were loads of “chosen ones” living under Pinochet? It reminds me of Reagan taking credit (from the outside) for the fall of the Soviet Union when those on the inside did all the work. Even more confounding is Dorfman’s visit to his friend Susana who put her own life and that of her daughter in danger by providing safe haven when he was on the run—but who stayed in Chile and became a militant. Dorfman offers that it was the little things like Susana’s act, and not the grand gestures, that knocked Pinochet out of power. Perhaps Raymont should have focused his lens on Susana for ninety minutes.

When Dorfman finally visits the Pinochet headquarters, sees the extent of the wiretapping (one wire equaling 300 phones), then notes that most of the Pinochet underlings are still walking around free (much like the Stasi and the KGB, adds talking head Juliet Stevenson, who starred in the play of Death and the Maiden), and that a good 30% of Chileans still viewed Pinochet as their leader right up until his death, it’s all too much. Dorfman’s reaction, that is. After being called a “dirty Communist” by a woman as he tries to visit the military hospital where Pinochet was taken after his heart attack, he tells her he mourned Allende—so he empathizes with her mourning Pinochet. A lovely sentiment wiped away when he later explains that he views all Pinochet supporters as accomplices to murder, creating a culture of fear so they could turn the other way. Later he testifies on behalf of the daughter of a friend who disappeared. Waiting outside the government building with the young son who she can’t answer when he asks, “What happened to my grandfather?” she collapses into tears, her life changed forever by wounds that never heal.

“The death of Pinochet is like an X-ray of Chile,” Dorfman pronounces after the passing of the dictator whose shadow still looms large in Chile. The new president, Michelle Bachelet, is a woman whose father was tortured and murdered by the vicious regime—yet she refuses to go after the many human rights violators residing side by side with the likes of Dorfman’s friend’s daughter. Dorfman can’t understand how she (of all people!) can turn a blind eye. But then how could he? For Dorfman never was a witness in the first place, only as ghostly a presence as the disappeared whose stories he tells.