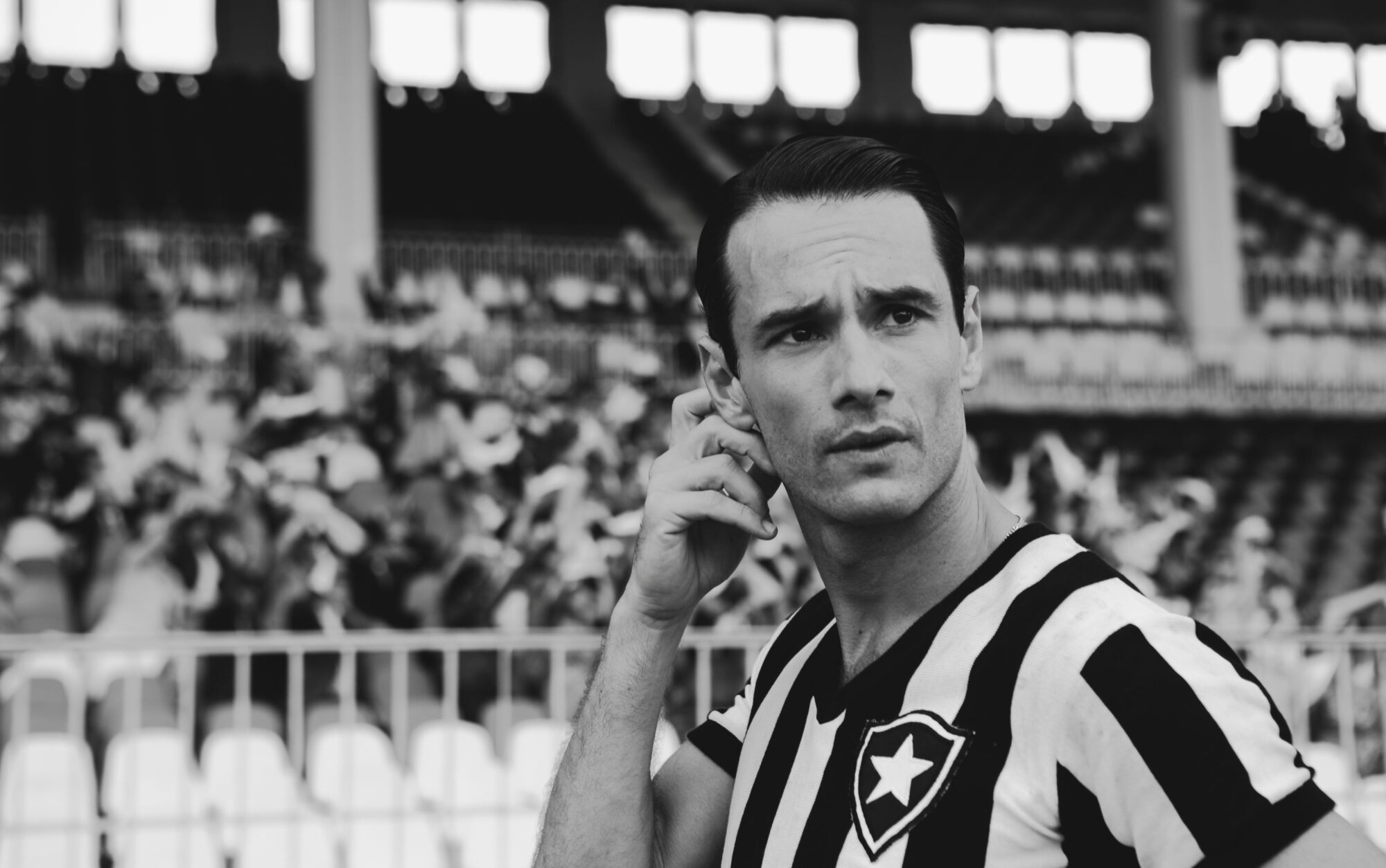 A devilish mix of handsomeness, arrogance, and voracity, Heleno de Freitas rose to fame on Rio de Janeiro’s Botafogo football team. His priorities in his nascent career, as he tells a reporter in this biopic directed by José Henrique Fonseca, are “goals, slim waists, and Cadillacs.” Though he was celebrated in Brazil for his brilliance on the football field, it was Heleno’s self-destructive stupidity off the field that turned him into a myth. And as if to reaffirm that myth, Fonseca hardly focuses on the man’s fancy footwork, fixating instead on Heleno’s hubris and hot-headedness, his womanizing and hunger for opulence, and how his insolence led to his early, syphilitic demise at the age of 39. Similar to the footballer’s own personal ideology, Fonseca indulges in pleasure over substance, aesthetics over insight. Heavily stylized in black and white, emulating the crisp contours of the classic films that Heleno claims to enjoy (yet actually never names), Heleno hints at a kicky, impressionistic style that Fonseca never effectively employs to actually communicate his main character’s demons.

Fonseca appears to be a follower of that school of confused chronology responsible for films such as La Vie en Rose, as Heleno’s life has been edited to shreds; the filmmaker pushes match cuts wholesale, toggling back and forth between Heleno’s glory days as a successful player and the final years of his life, when he’s crippled by advanced syphilis and trapped inside a sanatorium. Rodrigo Santoro bears a striking resemblance to Heleno, and the actor convincingly sells the man’s insanity, but the performance is dulled by Fonseca’s refusal to spotlight Heleno’s prowess on the field. In lieu of insight into the gravity of the footballer’s squandered talent (his “genius”), we’re offered a carnival show of the man’s poor decision-making: cheating on his wife with a lounge singer, huffing ether, ignoring his baby son, disregarding his doctor’s orders, and destroying a locker room and pensively sulking in the shower.

If there’s scant investigation into the essence of the man and his status as lothario, and little understanding for the roots of his pride, much attention is paid to the attractiveness of the film’s cast and the Rio de Janeiro locale. Such superficiality is typical of a film that suggests a Spot the Expository Device drinking game: Heleno calling his mother or writing her letters; the long-winded, boastful voiceovers; the warning-filled trips to the doctor; all the decoupaged newspaper clippings (which the sanatorium-interned Heleno slowly tears and eats, because, as the audience is constantly reminded, he’s insatiable). As Alberto, the closest person to a friend in Heleno’s life, pleads, “Take care of yourself more than your image, okay?” If only Fonseca had taken this advice, then Heleno may have overcome the stigma of simply attempting to dress up dreary biopic material about shallow decadence.