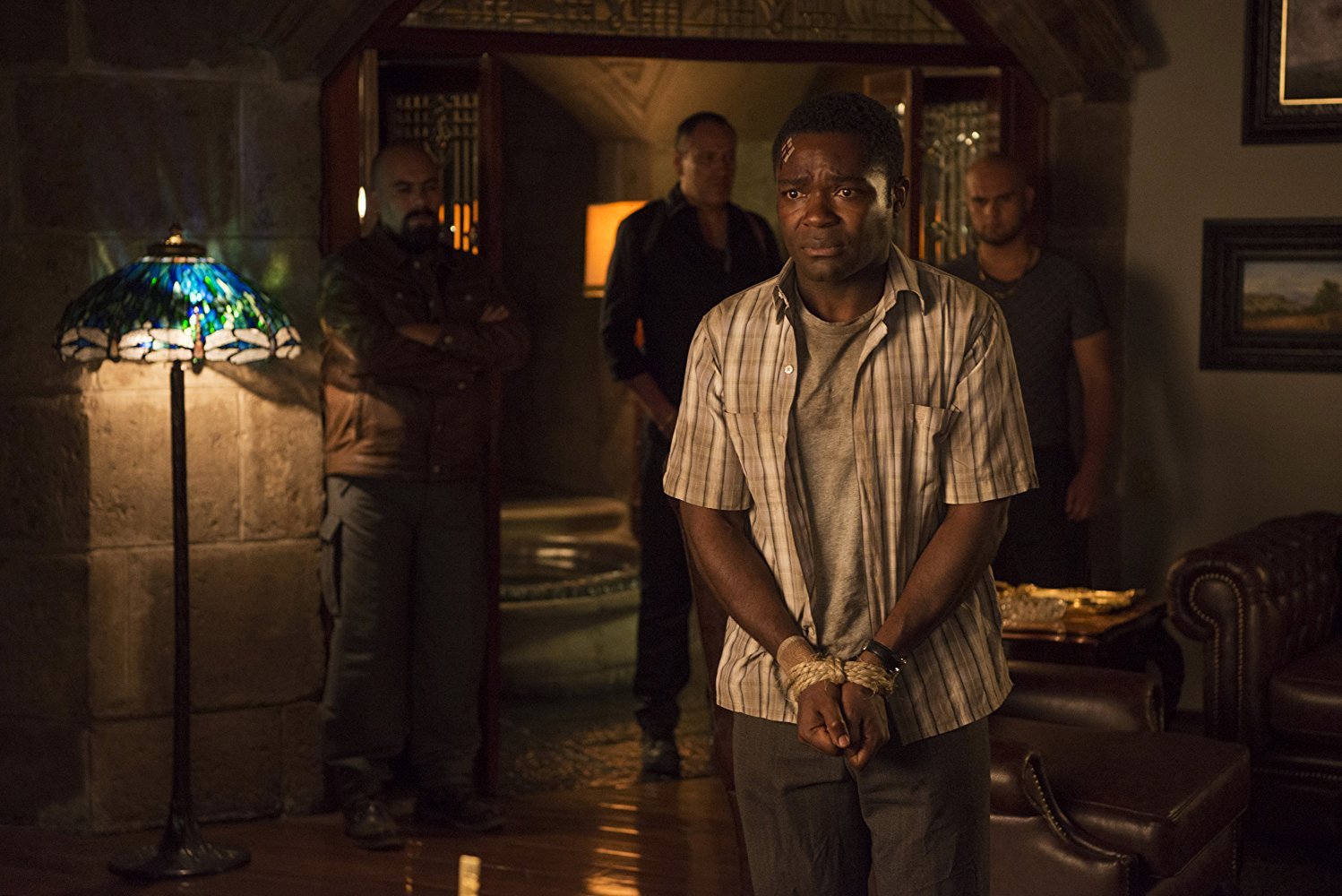 The circuitous narrative of Nash Edgerton’s Gringo is such that it never allows for a character or storyline to develop in a particularly efficient way, as every few minutes an abrupt twist or turn sets things off in a new and unexpected direction. The film, packed to the brim with characters and plot points, is but a series of barely connected threads. It’s practically a case study in the consequences of taking too much on, bouncing recklessly and senselessly from one tone and group of characters to the next as it tackles such disparate subjects as drug cartels, Big Pharma corruption, a mid-life crisis, corporate mergers, and even a mercenary’s path toward redemption.

Gringo initially follows the exploits of Harold Soyika (David Oyelowo), a well-meaning but rather clueless underling at a pharmaceutical company who learns that he’s going to be cut loose in the wake of a looming merger. As Harold’s higher-ups, Charlize Theron and Joel Edgerton have good chemistry, but the broad humor that largely inhabits their characters’ exchanges is of the faux-edgy comic variety, making it hard to tell whether the filmmakers are playing to pharma bros or mocking them: Throughout much of the film, Elaine (Theron) dismissively mispronounces Spanish words and Mexican names, while Richard (Edgerton) perpetually talks shit about his employees.

Gringo seems to prop up Richard and Elaine as its villains, but that changes once Harold discovers that his wife (Thandie Newton) is leaving him and, in a moment of desperation, fakes his own kidnapping while on a business trip to Mexico. When a Beatles-loving cartel leader, Black Panther (Carlos Corona), learns that Harold is the key to acquiring the formula for a medical marijuana pill that’s taken the south-of-the-border market by storm, a pretend kidnapping becomes all too real and the film, in turn, becomes stuffed to the gills with scoundrels. And before this storyline can build up any steam, the filmmakers introduce a disposable thread involving a fledgling drug mule, Miles (Harry Treadaway), and his cheery, optimistic girlfriend, Sunny (Amanda Seyfried), who repeatedly cross paths with Harold in Mexico.

Anthony Tambakis and Matthew Stone’s screenplay is an endless parade of plot twists that are almost all single-mindedly connected to one character or another’s sheer vileness or stupidity. And within this tornado of chaotic back-stabbing and conspiracies within conspiracies lies Harold, who simply wants what he deserves for always having done the right thing—except, that is, for his scam to extort his company for millions of dollars. That’s an indiscretion that the filmmakers initially see as justified, before then conveniently sweeping it under the rug and thrusting Harold in one situation after another that bludgeoningly reinforces that he’s always in the moral right.

Gringo is in exhausted state of overtime long before Richard’s brother, Mitch (Sharlto Copley), a mercenary turned humanitarian, flies down to Mexico on a mission to rescue Harold. And by the time the finish line is within sight, the shift in tone from borderline nihilism to upbeat hopefulness is so jarring as to induce whiplash. Which is a shame, because the film’s inability to settle on a defined point of view diminishes what’s most enjoyable about the production: Oyelowo’s agile comic performance. The failure to properly balance the story of Harold’s wild mid-life crisis with hijinks put into motion by insipid side characters leaves Gringo feeling at once bloated and rudderless.

Review: The Strangers: Prey at Night