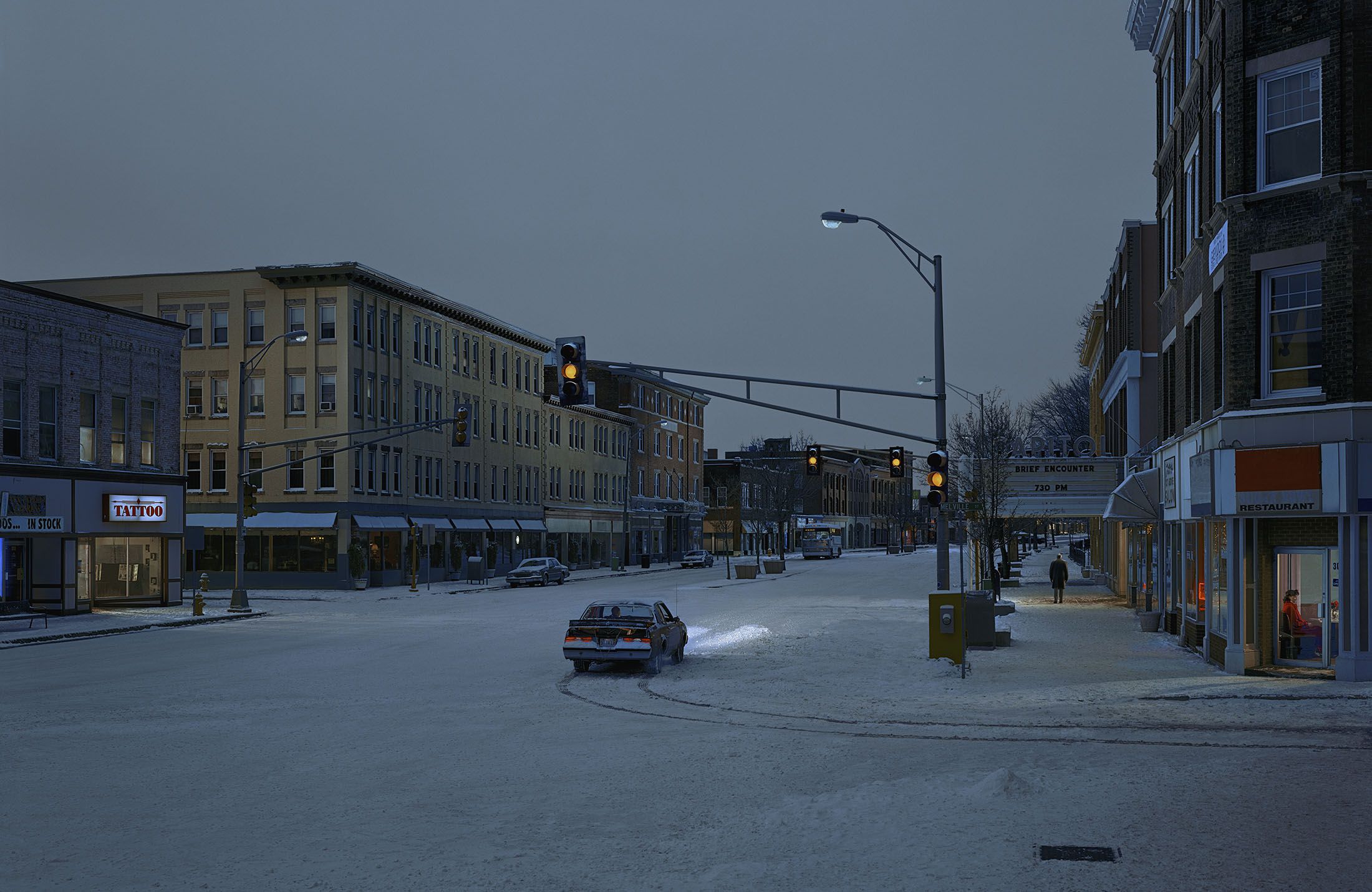 In Gregory Crewdson: Brief Encounters, director Ben Shapiro immerses himself in Gregory Crewdson’s creative process during the shooting of the photographer’s “Beneath the Roses” series, which spanned from 2002 to 2008. While there are some talking heads, notably writers Rick Moody and Russell Banks, who writes about the post-industrial small-town America that Crewdson favors for his settings, Shapiro reduces them to a minimum. Focusing mainly on the slightly manic, detail-obsessed Crewdson, Shapiro eschews the laudatory tone that seeps into so many films about artists. His documentary is also light on biography. We learn that Crewdson attributes his penchant for surrealist Jungian dreamscapes to his psychoanalyst father, and that he played in a music band that achieved modest success, but his early career is treated as a backdrop, reminding us that Shapiro’s goal isn’t so much a comprehensive biopic as an in-the-moment snapshot of creative fervent.

Crewdson awakened to photography when visiting a Diane Arbus show, where he fell in love with her picture of a Jewish giant. But unlike Arbus’s spontaneous intrusion into the suburban setting, which registered in her photo’s jolted angles, Crewdson’s interventions into suburbia are deliberately staged, down to every speck of dust, and so require a technical crew and design assistants. Where Arbus’s work had shock value, Crewdson’s has production value, an intricate tableau, as noted by photographer and former teacher Laurie Simmons. To make us realize just how intricate, Shapiro documents the planning, construction, and design that go into a single shot, then freezes the frame for a few seconds, allowing us to see what the final photograph looks like.

There’s some documentary impulse in Crewdson’s work (he scouts actual locations in western Massachusetts), but the emphasis lies on transformation, from mundane to sublimely strange. To achieve this effect, Crewdson may use over 70 lights, the kind found on film sets. When he shoots out of doors, he always does it at dusk, submitting his process to the mercy of the weather. For one picture, he must have intact, fresh snow: He keeps grumpy residents from shoveling and leaves perfect car-wheel marks in a street he’d closed off to traffic, only to nearly have the whole thing ruined by a truck that shows up to turn off the streetlights. In the end, he captures the sleepy, snowed-in suburban town, where a lost moviegoer stands under a cinema marquee announcing David Lean’s Brief Encounter. It’s a particularly satisfying sequence, in which Shapiro’s gambit—to juxtapose the frenzy of activity on the film set with the calm of the final photo, and to show the tension of having nature play a part in your picture—pays off. In another gripping sequence, shot in a sound studio, a young mother and infant are brought in; the crew waits for hours for the two-week-old baby to quiet down, to capture stillness and melancholy. Much of the scene’s hilarity arises not just from witnessing the spectacle, invented before our eyes, but seeing how much of Crewdson’s art relies on tiny, intangible, at times domestic felicities.

Crewdson certainly wouldn’t be the first contemporary artist to reference popular culture—his film references range from 1950s melodramas, Hitchcock’s Psycho (he recreates the infamous bathroom), to David Lynch’s Blue Velvet—or to work on a larger scale. Compared to Matthew Barney, he’s more of an indie filmmaker, creating magic on a small budget. And while he’s been at times criticized for his easygoing showmanship, recycling film references and psychoanalytic tropes with no new territory to claim, as an artistic peripeteia, Brief Encounters is great entertainment.