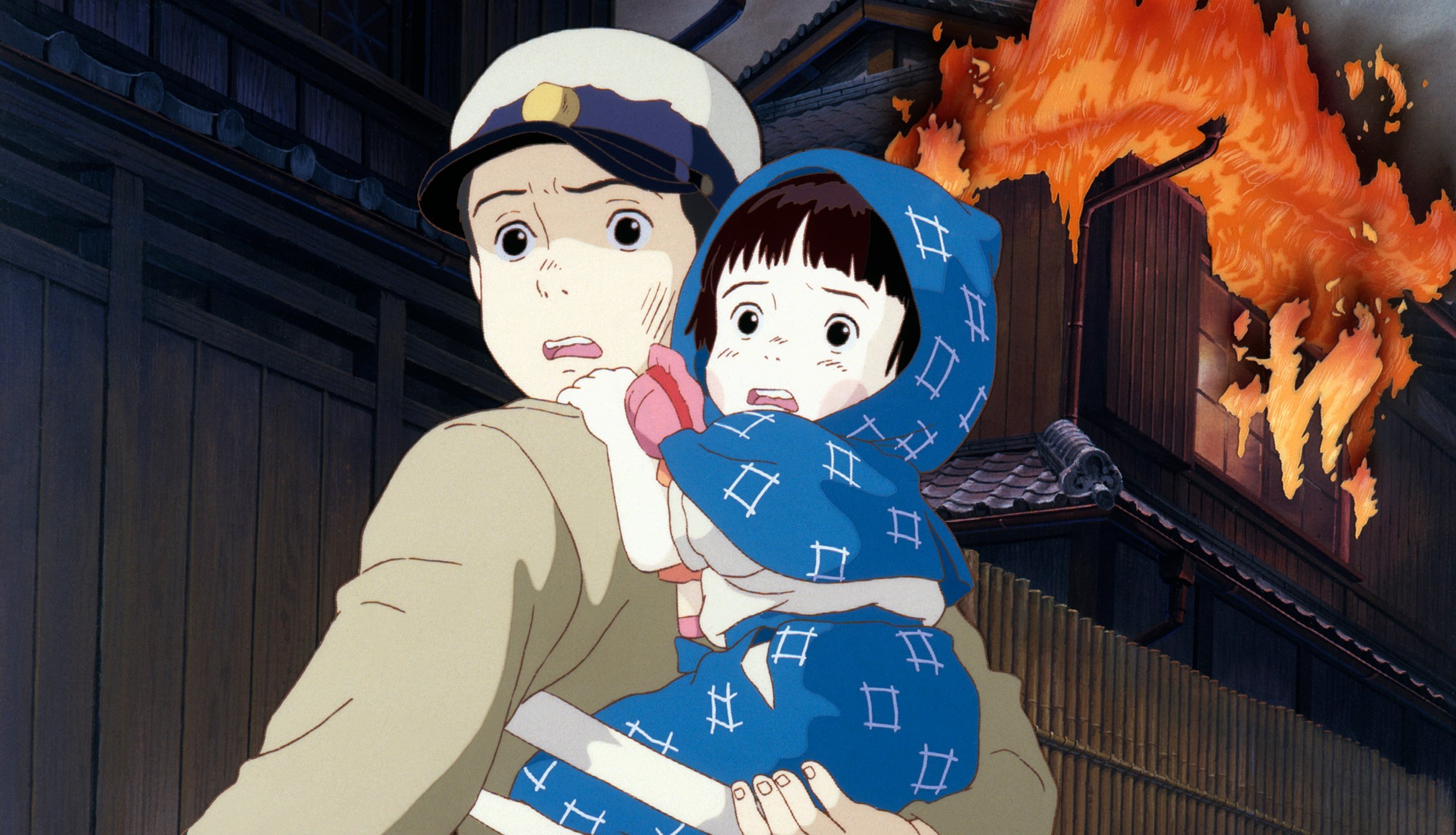 It comes as little surprise that writer-director Isao Takahata’s Grave of the Fireflies is as vital and potent today as it was 30 years ago when it premiered in Japan. This wrenching yet largely unsentimental anime depicts the “collateral damage” of the United States’s firebombing of Japan in the waning years of World War II, but its ultimate aim is a universal understanding of the toll of warfare. Ironically, it’s likely because of its sincere humanism and blunt attitude toward the ugliness of war, especially those fought from a distance, that Takahata’s film isn’t more widely celebrated.

Co-founder of Studio Ghibli with Hayao Miyazaki, whom he worked with on the sublime Kiki’s Delivery Service, among other films, Takahata is chiefly a neorealist, a conjurer of unfettered human experience working in a medium (and studio) known for its allegiance to fantasy and otherworldliness. Indeed, the story of Grave of the Fireflies could have easily enticed Kon Ichikawa with its sensitive, moral, and honest detailing of life during wartime, seen through the narrative lens of a brother and sister (voiced by Tsutomu Tatsumi and Ayano Shiraishi, respectively) who are orphaned by firebombing and find unstable shelter with their aunt at a nearby village.

Takahata makes survival the thematic core of the story, but he never degrades his characters or fetishizes their suffering. Nor, for that matter, does the director handle them with kid gloves. Setsuko, pre-adolescent sister to teenaged Seita, proves to be as needy and cloying as a deprived middle-class child would presumably be in a time of national disaster, and Takahata’s script smartly works in a way for Seita to tend to this neediness. Satiating Setsuko’s emotional outbursts and sudden mood swings is part of the survival, and Seita uses the remnants of a can of fruit drops as a reminder of faith, a superfluous nicety substituting for the comfort they were once surrounded by thanks to their naval-officer father and loving mother.

Set largely in a small rural village, Grave of the Fireflies offers a deft abstraction of memory. The film’s source material is Akiyuki Noraka’s novel of the same name, which is centered on the author’s remembrances of his sister’s death due to malnutrition after the Kobe firebombing in 1945. The animation itself works as a sort of filter, an agent of augmentation between Noraka’s personal experiences and the harrowing story Takahata unveils; the fact that it’s animated also implies, rightly but perhaps unfairly, that it’s a story meant for children. And if Takahata’s framing device of Seita and Setsuko roaming the afterlife together is some kind of bet-hedging, the script renders the scenes more warm and solemn than sentimental and religious.

As food and resources diminish, so does the small community become less giving and forgiving to the siblings, who eventually find a home in a small cave by the local pond. Takahata pays careful attention to the decay of capitalism here, as the lack of fresh food almost entirely eliminates the use of the siblings’ money or any trade they might have made. A strident corrective to any war film where glory is won without any sense of overwhelming, genuine loss, Grave of the Fireflies depicts the physical and mental disintegration of Setsuko with convincing realism and a firm grasp on the importance of routine. The daily tasks the siblings set up for themselves give the characters a sense of purpose and discovery, and the film benefits greatly from the balance struck between this understanding of normal, quotidian existence and how the gruesome aftermath of war disrupts that normality.

The film’s title comes from a scene late in the film that speaks directly to the human indifference that Takahata is obviously raging against. After the siblings’ first night in the cave, they find that the fireflies they caught have died and Setsuko buries them in a tiny hole. At that moment, Takahata cuts back to the mass grave that Setsuko and Seita’s mother was tossed in after the firebombing. The long tragedy of war, its endless horror and degradation, isn’t reserved solely for those who march bravely across enemy lines.

Takahata’s saturnine study of innocence rotted away in the name of righteousness belongs next to such recent triumphs as Clint Eastwood’s diptych of Flags of Our Fathers and Letters from Iwo Jima as a sobering reminder that America’s wars are never clean or truly righteous. That Grave of the Fireflies is only now receiving a proper American theatrical engagement speaks to exactly how slow we are to swallow that cumbersome pill.