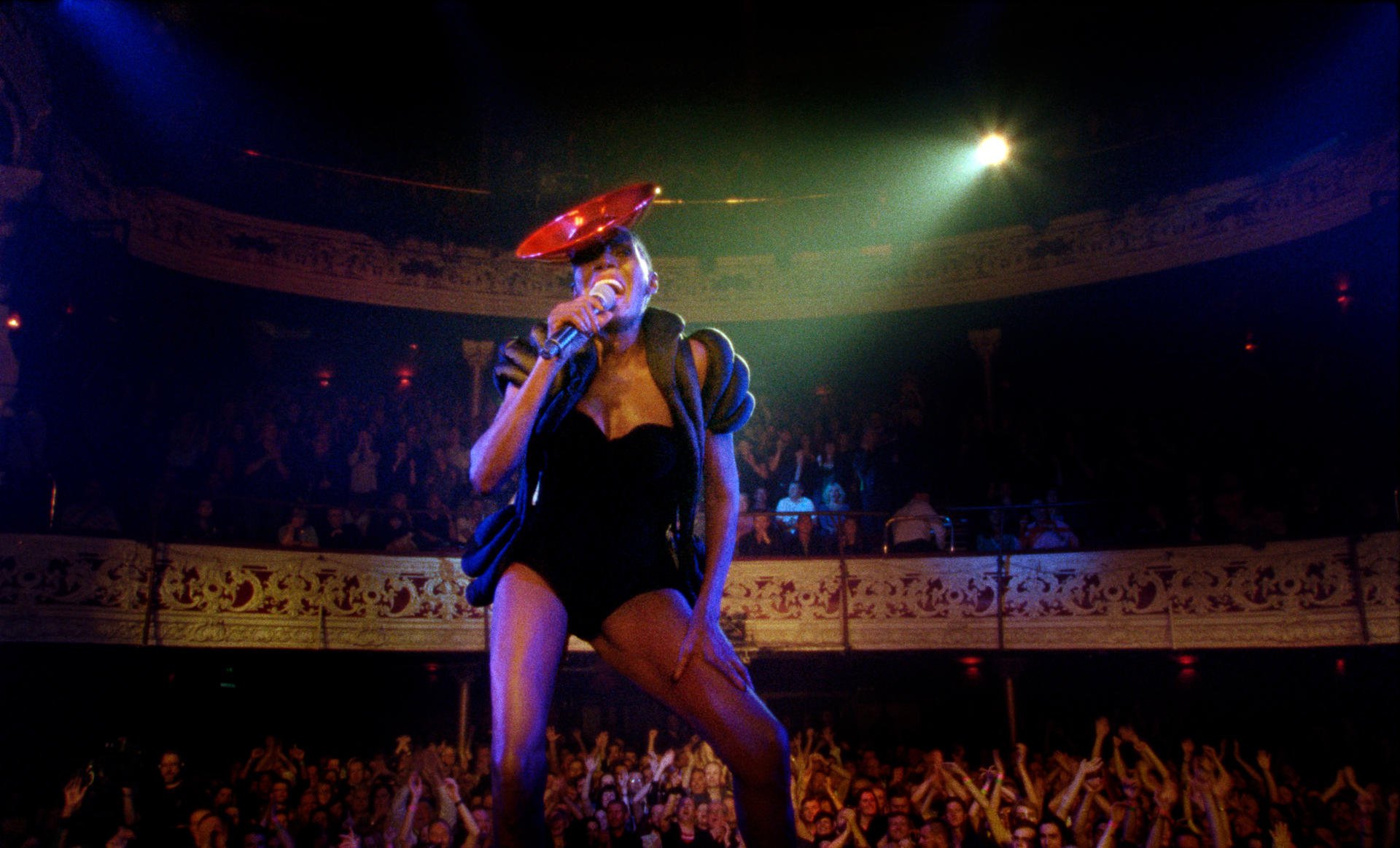 It’s enough to just train a camera on the towering Grace Jones and the glam, glitter, and inimitable fierceness will quickly follow. Sophie Fiennes (The Pervert’s Guide to Ideology) begins her biographical performance doc Grace Jones: Bloodlight and Bami by seamlessly intercutting two separate performances of the same song from a 2016 concert. In the first, Jones prowls the stage catlike, purring from behind an Eiko Ishioka-designed death mask. In the second, she croons the same lyrics while effortlessly, endlessly twirling a hula hoop. The message is clear: Jones is both these people, and more. She walks on some kind of undefinable razor’s edge, reinventing herself as whim and circumstance dictates, and Fiennes’s film follows that lead.

Shot and edited piecemeal over a decade, Bloodlight and Bami (the Jamaican slang title refers to both a red studio recording light and a type of flatbread) is a fragmented, purposefully obscure exploration of Jones’s life and art. There are no identifying titles, and the majority of the film is comprised of low-res DV footage trailing Jones on different tours, in the recording studio (for what appears to be her 2008 album Hurricane) and on a visit home (apparently circa 2005) to her family in Jamaica. It’s an eclectic approach that works more often than not once you get used to the fact that the gorgeous concert footage (with Jones strutting on a Dublin stage like a combo goddess-extraterrestrial—oh, those hats!) is of secondary concern.

Fiennes is more interested in visually and aurally personifying Jones’s raw, often ragged creative process. The sense is that, off stage, the Jamaican model, singer, and actress is an icon navigating perpetually muddy waters, with a different face for every occasion. No one persona, however, cancels out any of the others. (“I am woman, I am sun,” as she sings in the title track from Hurricane.) There’s no real grounding to Fiennes’s method. Indeed, there are moments (especially in the Jamaica-set sequences, in which Jones near-fully blends in among her family, friends, and community) where it seems as if we’re watching a whole other human being—one who never attained stardom, but only dreamed it. The effect, finally, of Fiennes’s unmoored approach to her subject is to take us out of normal time and put us on Grace Jones time. A true star moves through life to the tick of their own clock.