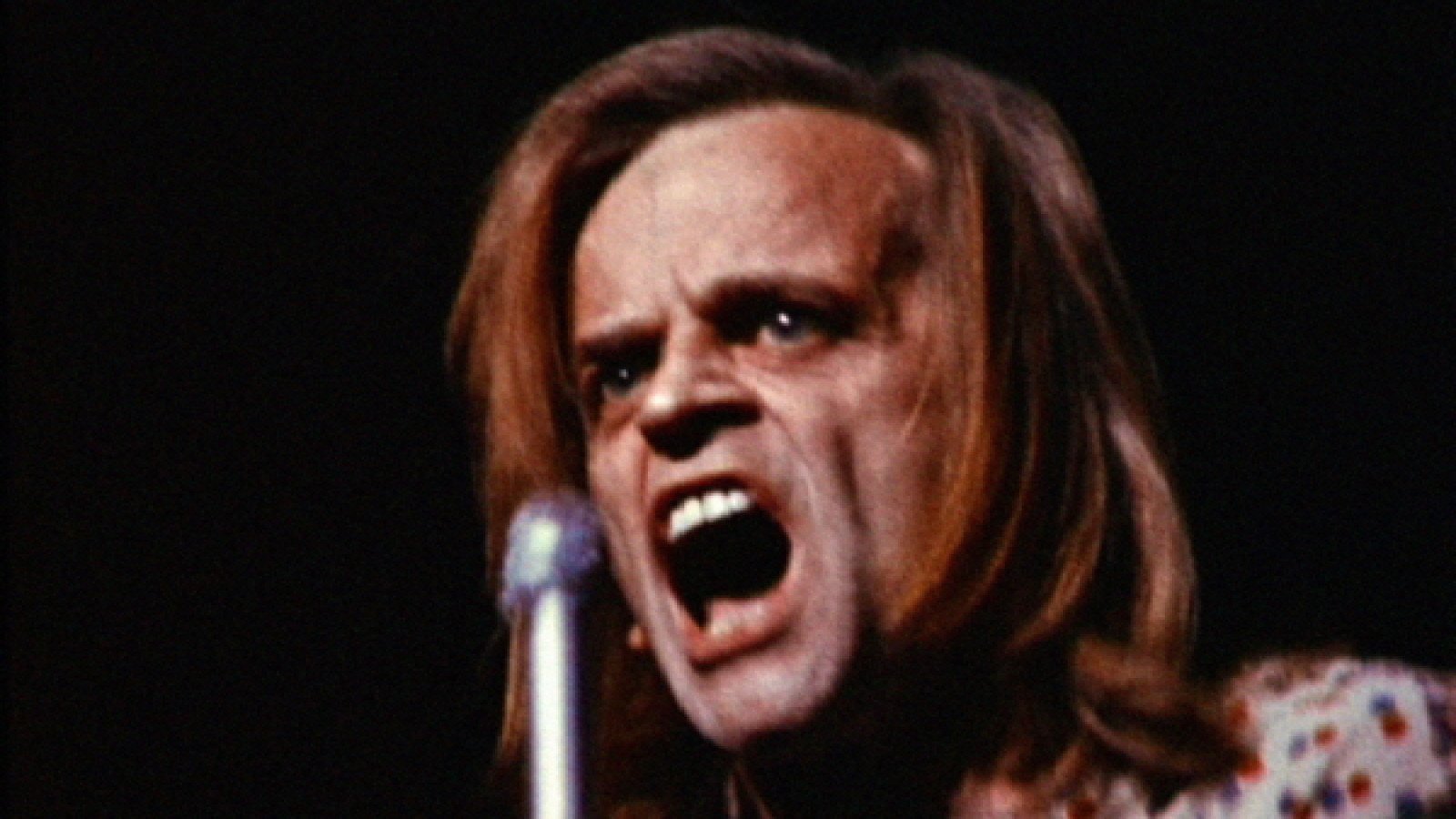 Klaus Kinski’s infamous intensity and lunacy are both on vivid display in Klaus Kinski: Jesus Christ the Savior, a recently recovered record of a 1971 theatrical performance by the Aguirre, The Wrath of God star. On a German stage outfitted with only a microphone stand, Kinski steps into a lone spotlight and begins reciting an extended monologue about a persecuted, angry Jesus Christ: “Wanted: Jesus Christ. Charged with seduction, anarchistic tendencies, conspiracy against the authority of the state.” From the outset, Kinski’s own god-complex association with his divine subject, whose role he soon assumes via speaking in first-person, is clear, and immediately rankles segments of the crowd who’ve attended simply to heckle. As audience members cry out, “I want my 10 marks back!,” and call out Kinski for what they see as the hypocrisy of his performance (the wealthy star extols anti-materialism and nonviolence, while also railing against his tormentors with threats of physical aggression), the show’s powder keg atmosphere ignites. Kinski storms off stage, albeit not before screaming, “You stupid pig!,” to a young man who tries, and fails, to command the mike before being removed by a security guard—to predictable audience objections to Kinski as a “fascist!”

A version of this scenario repeats throughout the night, as Kinski returns to the mike, only to be browbeaten by certain audience members convinced that they have a role to play in the evening. Director Peter Geyer’s archival footage, comprised of material from a select few cameras, has a fixated gaze that mirrors Kinski’s ferocity, which escalates as his performance forcefully mutates hallowed scripture into messages about contemporary flashpoints, be they Vietnam, hippies, or a more general strain of post-Woodstock opposition to institutional government and church power. Confronting taunts and ridicule with disgust and fury, Kinski becomes a bipolar figure, at once justified in his rage and clear-sighted in his condemnations, and yet the antithesis of the very virtues he so extols. Jesus Christ Savior, however, is mostly the portrait of the artist as an empathetically committed zealot and hotheaded madman, of a star attempting to communicate (and expunge from within) ideas and emotions that seemingly animate and torment him. And it ultimately proves a quite riveting one at that, even if its dynamite volatility and hypnotic momentum drains by Kinski’s third walkout and final, triumphant, post-credits recitation of his divine dissertation.

Klaus Kinski: Jesus Christ the Savior will play on February 20, 21, and 24 as part of this year’s Film Comment Selects series. To purchase tickets, click here.