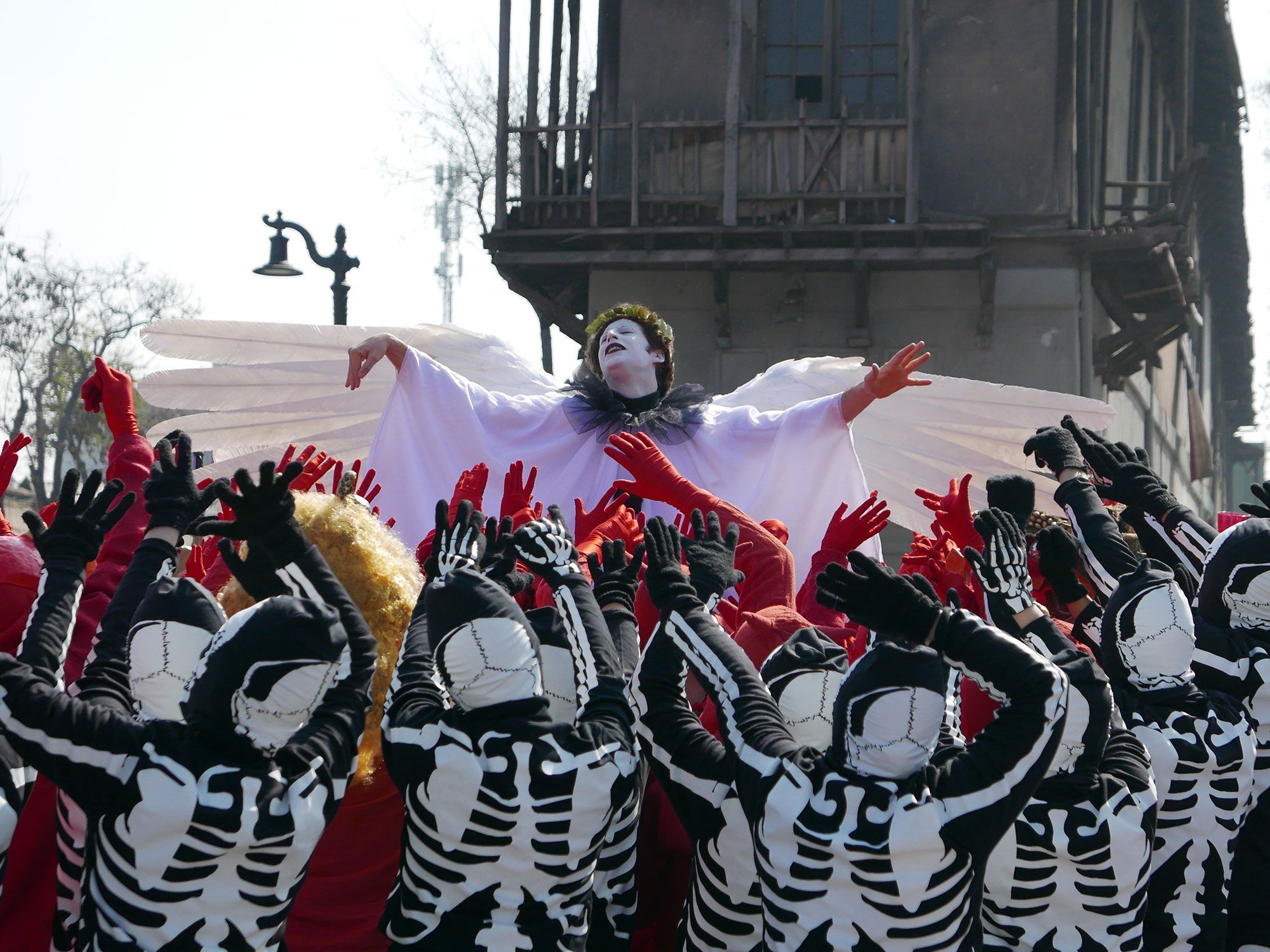 Alejandro Jodorowsky’s Endless Poetry doubles down on the narrative and aesthetic strategies of The Dance of Reality. The Chilean auteur’s newfound approach to narrative abandons the constant striving for cosmic truths that drove films like El Topo and The Holy Mountain and instead looks inward to ruminate on his past. This resituating of Jodorowsky’s concerns hasn’t so much tempered his flair for the surreal and the absurd as it’s forced it to become subsumed by more traditional narrative structures. Where the characters in his earlier work were on quests that were psychedelic and ridden with obscure, mystical symbolism, the visual flourishes in his latest films are mostly relegated to vibrantly colorful backdrops and costumes. His narratives are now driven by a more straightforward, linear logic that makes them more accessible but also less feverishly poetic and visually dense.

As the second part of Jodorowsky’s planned five-part loose autobiography, Endless Poetry picks up where The Dance of Reality leaves off, spending its first act concluding the story of the teenage Alejandro (Jeremias Herskovits). Still plagued by his overbearing, machismo-driven father, Jaime (Brontis Jodorowsky), breathing down his neck, Alejandro discovers the beauty and solace of poetry in Federico García Lorca’s work and sets out to become a true poet himself. The film then jumps 10 years ahead, picking up with a twentysomething Alejandro (now played by Adan Jodorowsky). While the remainder of Endless Poetry retains the nostalgia-tinged worldview that occasionally devolved The Dance of Reality into a state of excessive navel-gazing, the young Alejandro’s journey toward becoming a poet is thematically rich and narratively compelling. Adan Jodorowsky brings a compassionate intuitiveness to his performance as his now-adult father, capturing an unbridled passion for new experiences as well as a subtly encroaching bitterness that can come with age and self-examination.

The film’s most joyous, humorous, and emotionally fueled passages involve Alejandro’s love affair with Stella, the vivacious, voluptuous poetess who deflowers him before forcing him to toughen up in preparation for the challenging life of a poet. Jodorowsky’s casting of Pamela Flores in the roles of both Stella and his mother is as blatant as Freudian symbolism gets, yet in actuality, Stella, reminiscent of La Saraghina in Federico Fellini’s 8½ had she turned punk and gone to art school, combines the encouragement and good intentions of his mother with the tough exterior and brashness of his father.

Spurred by realizations that he made following the tragic death of his cousin, Alejandro leaves Stella, believing that his psychosexual intensity of their relationship has prevented him from growing as a person. It’s here that Endless Poetry begins taking a turn for the darker, becoming progressively more melancholic and thoughtful in its introspection. The carnivalesque atmosphere, reminiscent of late-period Fellini’s work, continues through a huge party that Alejandro throws at his new studio workspace and the literal carnival near the end of the film. But the celebratory tone becomes increasingly more foreboding and oppressive as Alejandro is forced to confront his troubled relationship with his father and the populist political uprising that led to former dictator Carlos Ibáñez del Campo’s (Bastian Bodenhofer) democratic return to power in early-1950s Chile.

Upon befriending fellow poet Enrique Lihn (Leandro Taub), Alejandro begins to accept the responsibilities and difficulties of life as an artist. The two set out to walk through Santiago in a straight line no matter what the barriers, continuing through strangers’ homes as a demonstration of their ideals. Later, Alejandro begins to walk again, eventually directly confronting a fascist parade honoring Ibáñez coronation as leader. His act functions as a sly reference to La Linea Recta, which translates to The Straight Line, a group of Chilean military officers who would soon oppose Ibáñez’s attempt to again achieve the status of dictator, as well as a visualization of the philosophy that would direct Jodorowsky’s life from that point forward.

When Alejandro’s childhood house burns down, he finally frees himself of his tumultuous past. After attending a citywide festival as a clown wearing angel wings among a crowd of devils and skeletons, he has a crisis of identity as he confronts the ephemeral nature of existence. Soon after, he decides he must flee to Paris, leaving his family, friends, past, and Chile’s turbulent political climate behind. Before young Alejandro leaves the country, the real Alejandro, who occasionally appears throughout the film as an on-screen narrator unseen by the other characters, creates a fictionalized reconciliation between the young Alejandro and his father, bringing them together in a brief yet cathartic embrace. It’s a remarkably tender sequence that’s as stark and emotionally direct as the filmmaker’s cinema has ever been.

Where the insularity of The Dance of Reality too often feels solipsistic, Endless Poetry eventually, like young Alejandro, opens itself up to the world in all of its beauty and complexities. Although the film isn’t as narratively or visually adventurous as his most famous works, Jodorowsky’s reflectiveness anchors it in a vivid emotional tapestry that compensates for its various shortcomings.