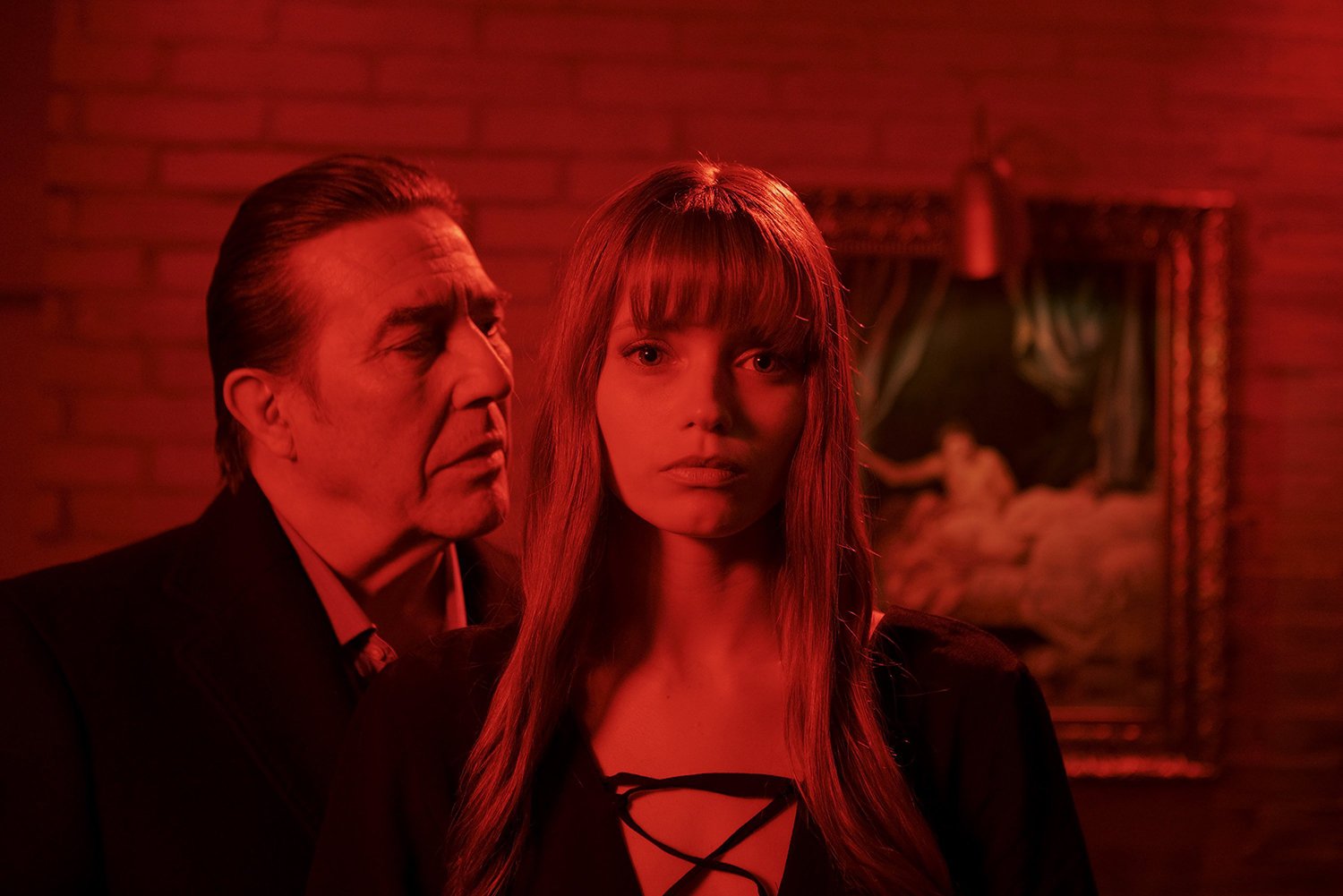 In Elizabeth Harvest, writer-director Sebastian Gutierrez twists the Bluebeard folk tale into a quasi-feminist riff on the “princess fantasy” that captivates our culture, in which women are encouraged to seek out powerful, often older, men as a means of completing themselves. Yet the film is also charged with a pointedly self-conscious male gaze, and this conflict between theme and formalism illustrates a neurosis of modern culture: how people are driven to talk the progressive talk while envying and objectifying one another all the same out of conditioning. In this bridging of intellectually incompatible urges, Gutierrez’s film recalls Nicolas Winding Refn’s The Neon Demon.

In its opening, Elizabeth Harvest practically throws the gauntlet to feminists. Newlywed Elizabeth (Abbey Lee) is riding through the countryside with her husband, Henry (Ciarán Hinds), and Gutierrez frames her face in gauzy close-up as she claims to have always dreamed of being whisked away like a princess. With its vast chambers, chic glass walls, elaborate fireplaces, and a cavernous wine cellar, Henry’s home certainly resembles a modern castle. It also suggests a fortress out of a science-fiction film, with doors that are locked via fingerprint. As Henry gives Elizabeth the tour, he calls her his “pet” and treats her in a manner that corresponds with that designation; she might as well be an exotic bird that he’s procured for his bedroom.

Throughout these early sequences, Gutierrez manages a tone of swanky, comic rottenness. The camera drinks Henry and especially Elizabeth in as they wander the home, and elegant tracking shots are jaggedly cut together to suggest a fissure in Henry’s paradise. The pronounced luxury of Henry’s estate almost feels routine—baubles procured by a bored man—as does Henry’s self-congratulatory courting of Elizabeth. Throughout, Lee and Hinds display a spectacular anti-chemistry, as both actors are deeply in sync with the creepiness of this particular realization of the fantasy of the young and naïve woman drawn to a rich older man. This marriage feels arranged, and Elizabeth is imbued with the sort of passiveness that’s now verboten for female protagonists. But Gutierrez also understands why this is a classic fantasy, savoring Lee’s body with a relish that’s more than auto-critical. Indeed, the filmmaker dives into the lurid potentialities of a narrative that updates the sadomasochistic gender politics of the English gothic for the 21st century.

Henry tells Elizabeth that the entire house is for her—the art, the money, the jewels—except for one chamber that he’s kept for himself, and his manner of relating this information to her is so obviously foreboding that she will of course go into the room. Conditioned by such gothic tales as Rebecca, which follows a woman in peril as she wrestles with the ghosts of her new husband’s mansion, we assume that Gutierrez’s film will gradually build up to Elizabeth steeling herself to face whatever ghastly truth Henry is hiding. But, in one of Elizabeth Harvest’s many shocks, Elizabeth enters Henry’s private chamber right away. There, she discovers a clone of herself resting in a cryogenic chamber and is promptly butchered by Henry for her impudence.

Gutierrez almost paints himself into a corner at this point of the film, as the narrative must now start all over again with the audience still unaware of what exactly is going on, as a new Elizabeth awakens to retrace a clearly recurring pattern of seduction, discovery, and murder. Not long after the first Elizabeth’s murder, Gutierrez spends something like 45 minutes of the film’s running time on exposition that’s so knotty it leaves you wondering why anyone bothered to explain the nature of Henry’s tangled and narcissistic experiments at all. (The exposition is related through a vintage gothic device—the diary of the Maid Who Knows Something, played in this case by Carla Gugino, whom the filmmaker also idolizes with his camera.)

Yet the plot convolutions of Elizabeth Harvest conjoin with Gutierrez’s stylistic bravura—blasts of red and blue in Cale Finot’s cinematography that connote a spiritual as well as physical sense of ultraviolence—to create an incestuous atmosphere that’s reminiscent of the stories of Edgar Allan Poe. Henry is a memorable monster, played by Hinds with a bravura mixture of smug entitlement and oily needfulness that’s weirdly and unexpectedly poignant. In one of the greatest mad-scientist speeches ever delivered by a character in a horror film, Henry explains that his cloned wife is only real to him when he destroys her. This admission chillingly crystallizes the thin line, within the male gaze, between adoration and contempt.