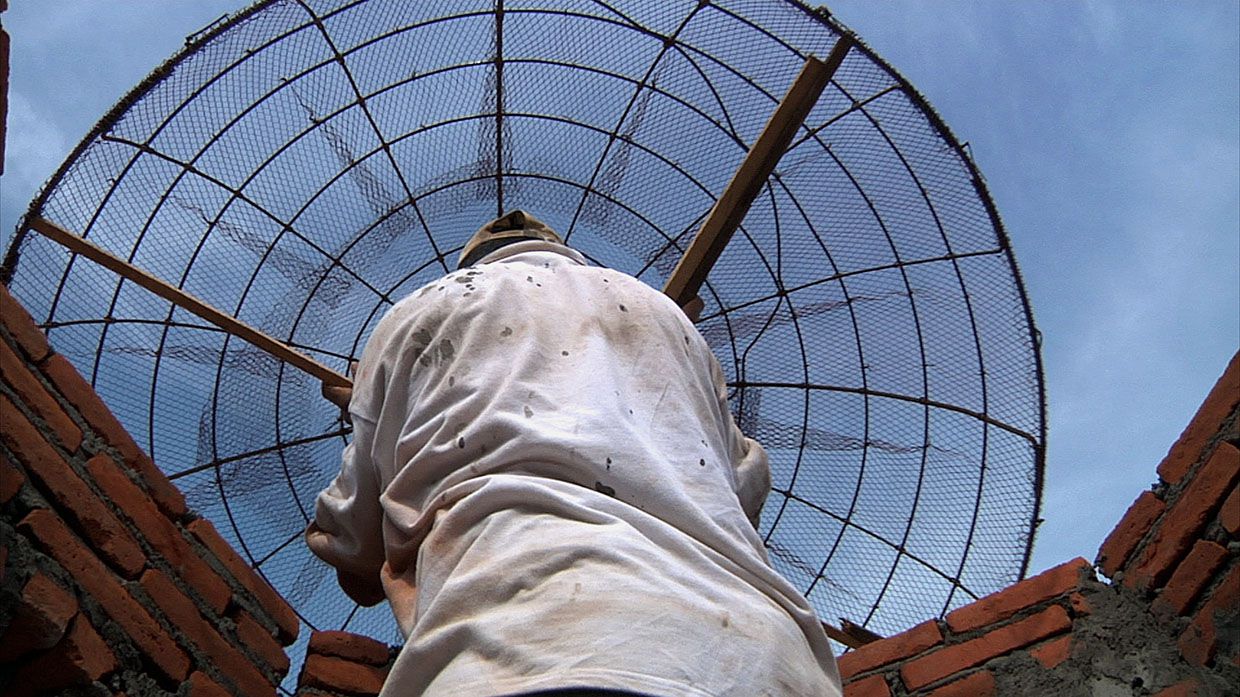 In the vein of Sweetgrass and Foreign Parts, El Velador fixes its concentrated gaze on a Culiacan, Mexico cemetery where the bodies of the country’s drug lords lie in well-manicured mausoleums. The nation’s heart of darkness, this locale is a place at once untouched and defined by violence, a condition director Natalia Almada conveys through wordless views of the life that continues on amidst the dead: the titular night watchman, quietly hovering about when not listening to, or watching on TV, news broadcasts of the nation’s ongoing military-cartel warfare; workers in dusty split shoes toiling away at the construction of these final resting places; and the daily appearance of shiny hearses and luxury cars carrying mothers who wail for their fallen sons. Posters of the dead, all young men flashing tough expressions from the great beyond, line the area, as a young, beautiful woman mops the floor of her cop husband’s tomb while their daughter hops and skips around the area, instinctively treating this familiar environment—a home for both those in the ground as well as above it—like a playground.

Almada’s attention to sound—the wind blowing across the foliage-destitute land and through the still-incomplete buildings; the shuffling of dogs wandering the area; the hammering, clanking, and rustling of the workers’ efforts—creates immediate, almost spiritual engagement with her milieu and its inhabitants. Similarly, the framing and cutting of her generally static compositions conveys not only raw emotion, but fills in the very contextual information that isn’t relayed via traditional narration or textual background. Political concerns are addressed with a TV report in which a former U.S. official claims that the Obama administration must do more to help the Mexican government combat its narcotics-industry crisis. More pressing and evocative, however, is the way in which the nature of these people’s specific hardship is conveyed through spartan aesthetic means. News stories about economic ruin are almost superfluous after sights of workers’ calloused hands and lined faces performing menial labor, as well as after juxtapositions of class and wealth disparities, such as with images of poor workers hanging chandeliers and paving floors of glitzy crypts, only to then—as with the night watchman—retire to a wood plank-on-empty-tubs bed.

El Velador doesn’t pass judgment or manipulate emotionally, instead choosing simply to consider the arduousness of survival in a land wracked by slaughter. Almada’s visuals speak volumes even as their precise intent remains open to interpretation, lending the film a figurative expansiveness that nicely meshes with its geographically narrow focus. Candles burn in shrines next to grave markers, a vendor cuts a piece of fruit on a stick for a young child, and wreathes are carried to memorial services—snapshots of sorrow, endurance, and ritual that resound with tranquil gravity. The film serves as silent witness to its subjects’ perseverance and pain, which it suggests is destined to continue via a late sequence in which workers eagerly discuss the monumental news that the cartel’s “boss of bosses” has been executed, even as nearby bulldozers continue their work clearing land for the cemetery’s further development. All the while, the night watchman performs his duty with a mechanical sense of obligation and resignation (to his own impoverished circumstances, and the country’s devolution into chaos) that’s subtly heartbreaking, and lends a sense of tragedy to the climactic sight of him hosing down the dirt road outside a lavish mausoleum, a futile attempt to soften this hopelessly hard land.