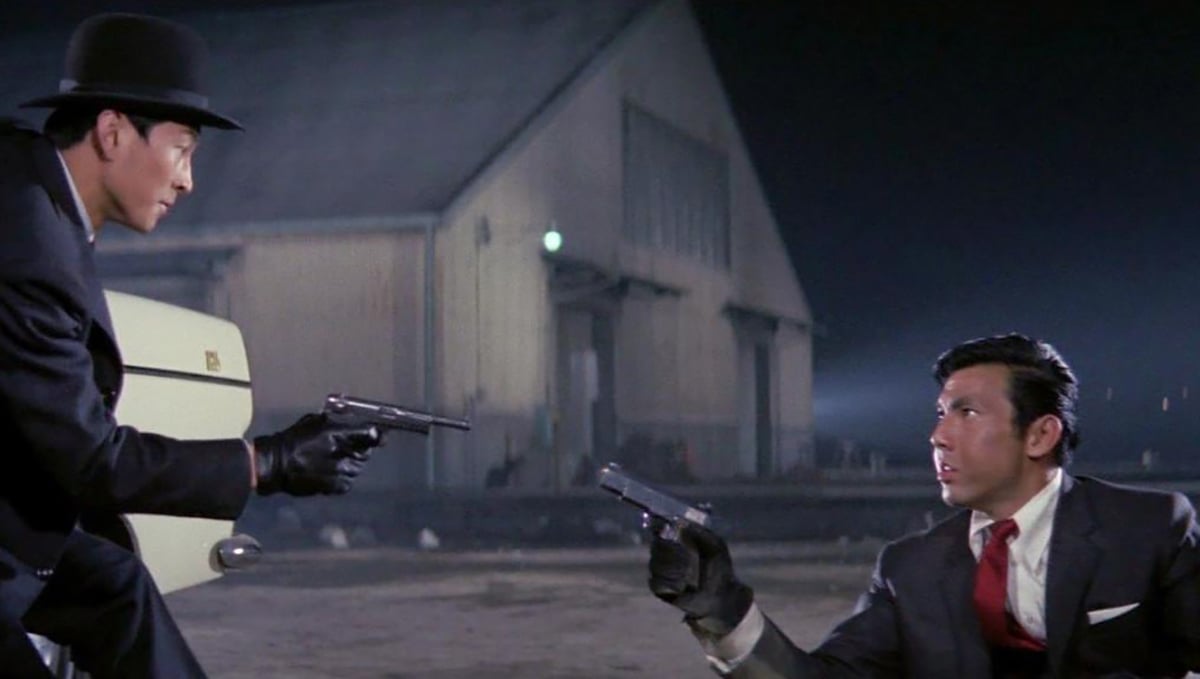 When Jim Jarmusch met hard-boiled, irreverent Japanese filmmaker Seijun Suzuki, they spent an entire evening hanging out. At first, Suzuki was very polite in his statements about Ghost Dog: The Way of the Samurai, but after a few drinks he opened up about the things he didn’t like so much. “I like the atmosphere very much, [but] it takes him too long to go and kill everyone! I would get him there, kill ‘em all. I don’t have time for all this.” Best known for his ultraviolent 1967 film Branded to Kill, it’s a Yakuza film that seems filtered through Alice in Wonderland, with logical plotting thrown out the window in favor of absurd mayhem. He got through being blacklisted and most of his later work feels like impressionistic dreamscapes filtered through hard-nosed, B-movie genre trappings, even when the movies are about painters and poets. Something about Suzuki’s early work as a contract player, churning out one Yakuza gangster film after another, instilled in him a basic, primal desire to keep the movie entertaining, even if that entertainment were in utter defiance of film grammar or common sense.

Though it’s ideal to start with Suzuki’s later films and work your way backwards to his hallucinatory, not-for-all-tastes Branded to Kill (his most recent, Princess Raccoon and Pistol Opera, are as much fun as Warner Bros. cartoons), Kino International recently put out a few action films from the Nikkatsu Studio, which churned out fast-paced crime movies on low budgets. One of Suzuki’s many work-for-hire projects was Detective Bureau 2-3: Go to Hell Bastards!. The nominal plot: The Yakuza are fighting the Triad in a turf battle, where they attempt to double- and triple-cross one another in a series of bloodbaths—scene one features an ambush involving corrupt American G.I.s and two rival gangs, where a high profile arms deal is interrupted by a Pepsi Cola truck that seems to open fire on them from within the racks of soda bottles, and it all ends in a gigantic explosion that lingers over the drawn-out opening credits.

Enter sleek, dapper, suit-wearing crime fighter Tajima, played by regular Suzuki leading man Jo Shishido, whose plastic face twists from a smug, beaming grin into wide-eyed, jaw-dropping panic with all the rubbery grace of Bruce Campbell. While handling chores of exposition with the police chief and a bespectacled cop secretary (both unfortunate comic relief whose mugging line deliveries are about as much fun as those scenes with the dorky sheriff and his clodhopping deputy in Last House on the Left), Shishido seems like he’s working in sync with Suzuki’s wide angle lens and freakishly jarring push-ins. At one point, when making a declaration about why he needs to be on the case, the camera looms into an uncomfortably tight two-shot on Tajima and the chief, and they pause as if in recognition of the cramped framing. It’s a moment that would feel right at home with the broad antics of silent movie comedy.

A fair amount of Detective Bureau 2-3 is devoted to action sequences, which range from the cliché (hero and girl are caught in burning building—will their friends rescue them in time?) to the subversive (one shootout is played out in an extreme wide shot so far away it seems like you’re watching ants—and it’s so bold, it feels disappointing when Suzuki feels obligated to cut in for rote close-ups of gangsters shooting at one another.) The pleasure of Detective Bureau 2-3 is less in these setpieces than in Suzuki’s desire for entertainment at all costs, which means not only is the hero’s ex-girlfriend a singer, she also threatens to blow his cover by trying to drag him onstage and sing a duet about lost love while he’s trying to get in tight with the Yakuza (Sample lyrics: “He’s a bastard that spends his time lying / Where is the mink coat that you promised me?”). In fact, pretty much whenever the movie starts to lull, Suzuki throws in some sort of dance number, complete with chorus line.

Running a little less than 90 minutes, Detective Bureau 2-3 can’t be accused of being painfully drawn out. If anything, it’s so slight and insubstantial one longs for the maniacal bells and whistles Suzuki brought to his later work. Anyone looking for a moral at the climax, well, our hero proclaims while cleaning his gun, “If there are less Yakuza, the world will be a better place!” But they’ve wiped out quite a few of the bad guys by the climax, and no doubt climb over the bodies to face more in Detective Bureau 4-5 or whatever other cheapo gangster movie next churned out by Nikkatsu Studio.

Review: Night at the Museum: Battle of the Smithsonian