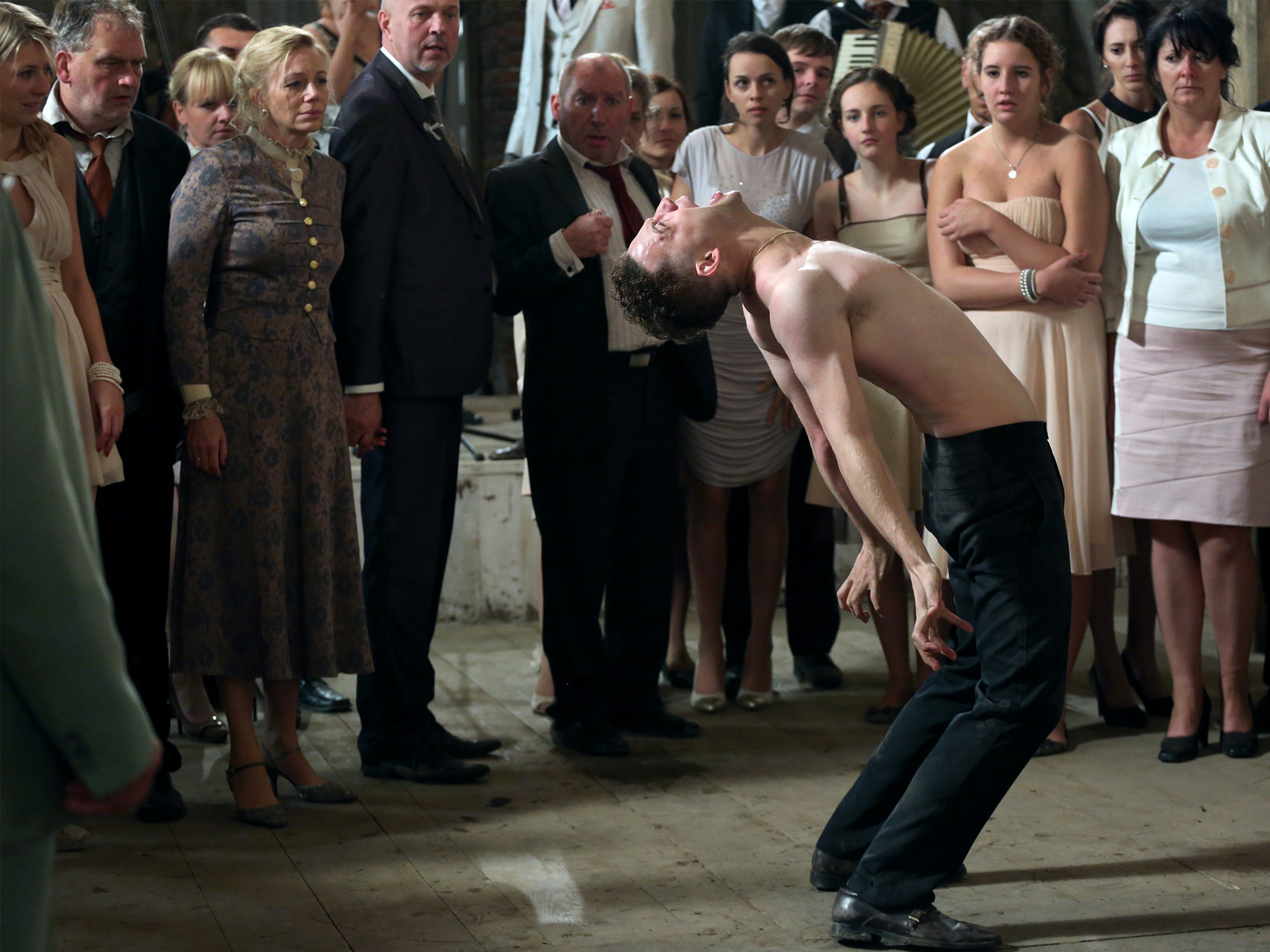 In Demon, the past hangs over the present like a veil. The film opens on a largely deserted Polish village, where the buildings are in disrepair and the roads are empty, save for a bulldozer, or “digger,” that’s chugging along, its destination revealed to be a family farm estate about to be inherited by Zaneta (Agnieszka Zulewska) and her fiancée, Piotr (Itay Tiran). A ferry is seen crossing an expanse of water as Piotr looks around from aboard, noticing a partially unclothed brunette woman splashing about in the water near the bank, screaming. We’re told that a bridge used to run to this village, but the “Germans blew it up.” Meeting Zaneta’s father (Andrzej Grabowski) for the first time in person, at the latter’s construction office, Piotr says he’ll design a new bridge to connect the village to the mainland. But the old man greets this promise with a nonverbal response that implies to Piotr that it won’t be that simple, as there are things about this place that an outsider can never know.

Demon is an honest-to-goodness ghost story, which isn’t to be taken for granted. Cinema, particularly American, tends to see ghosts as pretenses for offering special effects and action, or as superficial substitutes for monsters. Ghost stories in literature, as embodied by the work of M.R. James, Algernon Blackwood, Peter Straub, among many others, are more concerned with the supernatural as a physicalizing of the past, suggesting that the past gains a mental agency and determines to reassert itself on contemporary society, forcing the latter to settle a moral ledger with the former. Too often lost in cinema, with the notable exception of the work of Guillermo del Toro, is the notion of the ghost as the aggrieved, rather than the victimizing, party. Important to the ghost story is the recognition that the mystery driving the narrative is essentially unsolvable. No ledger is capable of being squared.

Director Marcin Wrona, who died shortly after the film’s premiere last year at the Toronto International Film Festival, captures the airy, ineffable wrongness that drives a classic tale of the supernatural, which is typically occupied with the slight perversion of the banal. The tracking shots across the water, as Piotr rides the ferry to the village, are frightening because water is often used in this sort of horror fiction as a symbol of a vast, submerged dimension from which something is waiting to spring. This impression is heightened by images that soon follow of a rock quarry near the construction site overseen by Zaneta’s father, which are rendered with an unsettlingly explicit sense of simultaneous verticality and horizontality. The audience is meant to sense, without a shred of exposition, that something primordial is being disrupted.

Demon tells the story of Zaneta and Piotr’s eventful two-day wedding. Wrona establishes a prismatic series of cultural frictions, showing how such tensions tend to rear their heads at weddings. Zaneta and her family and their older generations are haunted by the German invasion of their country. Piotr is from London, and his marriage to Zaneta was brokered by her brother, Jasny (Tomasz Schuchardt), a stylish roughneck bad boy with a poignant obedience to his family and, initially, to Piotr. Zaneta’s father often insists on calling Piotr “Peter,” which is presumably his official Anglo Saxon name, speaking to him in English, while Piotr insists on conversing in Polish. Jasny, on the other hand, sometimes refers to Piotr as “Python,” which might refer back to a life the men spent carousing together before Piotr decided to wed Zaneta. Wrona allows so much to be either unsaid or unanswered: Most prominently, why would a beautiful modern woman such as Zaneta need an arranged marriage? Or is it forced? The second possibility doesn’t make much sense, as Zaneta is clearly, powerfully attracted to Piotr.

Most of Demon is set on the estate that Zaneta and Piotr are about to inherit, and this location is as viscerally beautiful and creepy as the landscapes that open the film. There’s the principal home, often clouded by shadows, which needs work and has the carvings of the names of people who were once here, most pointedly someone named Hana. Nearby is a vast barn whose interior is ornamented in white drapes, curtains, and lights for the wedding reception, which is revealed to be a Vodka-drenched blowout that’s gradually perverted by a Jewish clinging spirit’s machinations.

Once the reception commences, Wrona springs a dazzling variety of set pieces of exponentially intensifying strangeness and sadness. What registers most prominently at this wedding is what’s most striking about most weddings in reality: the over-compensating desperation to make revelry as an evasion of vulnerability and terror. A storm rages, the rain emphasized strikingly by the stray light from the lightbulbs in the barn’s exposed ceiling, chaos knocking on the door of a celebration of social structure. The fervent drinking of the attendees, the energetic playing of the band, and the pounding of the weather suggest disastrous incoming extremis, as if these people were aboard a sinking ship. Demon offers a tidal wave of unrelieved longing and regret, with a devilish streak of absurdism. Zaneta’s father best sums up the reckoning of denial that drives the film: “We must forget what we didn’t see here.”