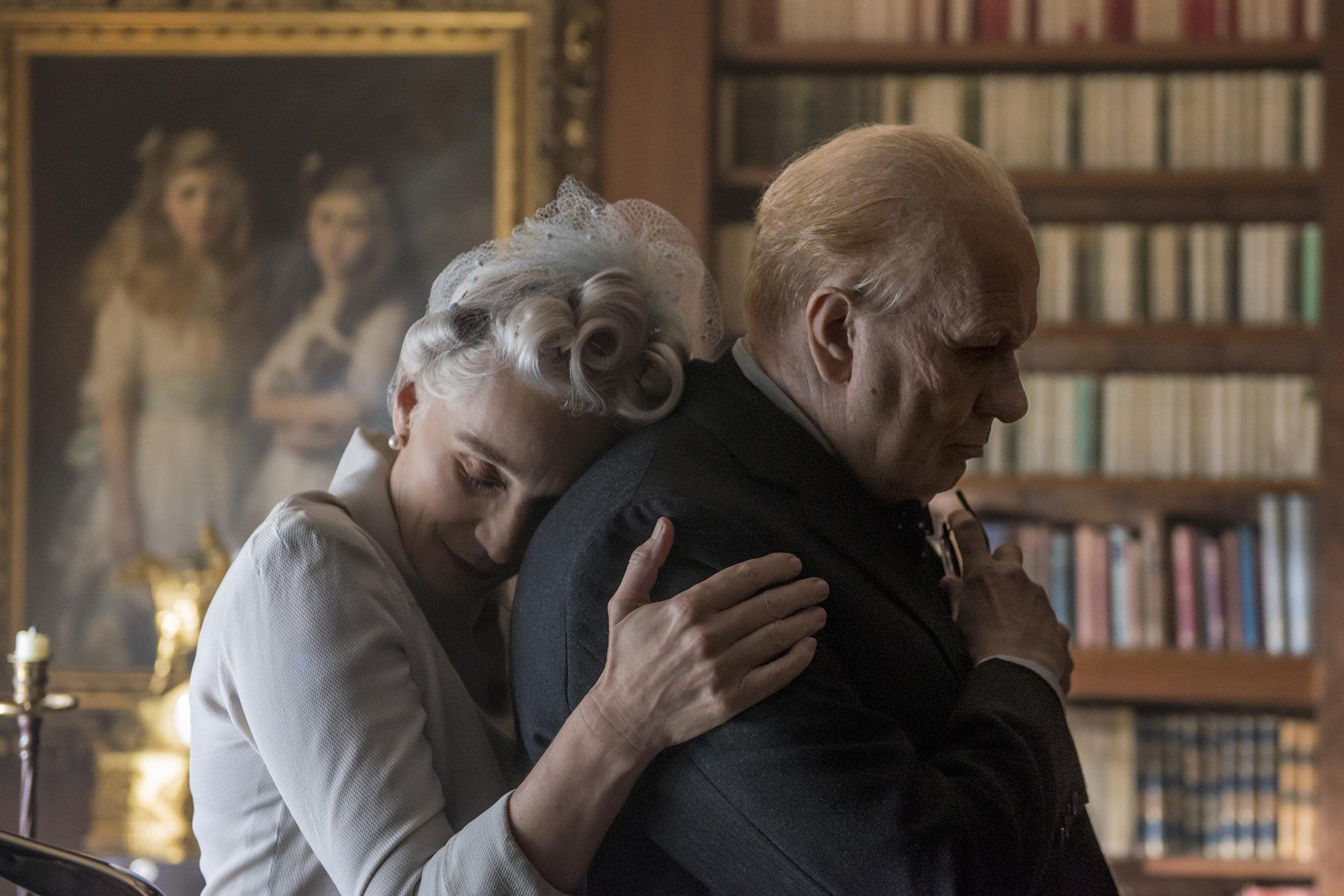 Joe Wright’s aesthetic signature is conspicuous from the start of Darkest Hour, an overview of Winston Churchill’s (Gary Oldman) ascent to the role of prime minister as the drums of war were beating loudly in Britain. The director opens inside Parliament, laying the film’s title card over a bird’s-eye view of the House of Commons, a pallid chamber lit by a pale sunbeam just bright enough to illuminate the dust floating in the air. The room is animated by the hundreds of Parliament members screaming for the resignation of Neville Chamberlain (Ronald Pickup). The shot summarizes Wright’s personal approach to filmmaking: deploying aesthetic flourishes to punch up sedate scenarios in a manner that too often comes across as empty and gimmicky.

Noticeably missing from the pile on against Chamberlain is Churchill, who, as noted by a fellow Tory, is avoiding the scene so as to not be caught with the “murder weapon,” thus allowing the man to position himself for succession without looking too eager to eliminate the obstacle standing in his way. Churchill’s essence nonetheless hangs heavy over the hall, with colleagues uttering his name softly, as if afraid he might suddenly appear if they speak of him too loudly. And his is a fearsome reputation that’s comically undercut by his first on-screen appearance: of the future prime minister scarfing down breakfast and guzzling booze inside a bedroom where old cigar smoke appears to permanently hang in the air. In bed, Churchill doesn’t cut an imposing figure to anyone save his new secretary, Elizabeth Layton (Lily James), whom he delights in tormenting as he rouses himself awake.

Forced to nominate Churchill for prime minister because the opposition will accept no other candidate, ranking Tories nonetheless soon get in lock step against his hawkishness in order to urge negotiations with Hitler. Prime among this feckless lot is the officiously aristocratic Viscount Halifax (Stephen Dillane), whose hard countenance betrays his nervousness around Churchill. The film views the rank-and-file Tories firmly through a lens of hindsight, casting their aversion to total war entirely as out of touch in its cowardice and not at all as a consideration for the still-healing wounds of World War I.

Against such paper tigers, Churchill is a two-dimensional beacon of righteousness, but he gains subtler shades when interacting with those who can match his authoritative presence. Oldman has excellent chemistry with Kristin Scott Thomas, who plays Churchill’s wife, Clementine, with all the stern regality and subtle wit at her disposal. Where Winston wields his sense of humor like a longsword, swinging it in wide arcs, Clementine uses hers like a rapier, landing quick, well-placed blows that puncture her husband’s overinflated ego, often catching him by such surprise that he dissolves into cathartic giggles mere seconds after shouting in stressed fury.

Even stronger are the scenes between Churchill and King George VI (Ben Mendelsohn). Mendelsohn sidesteps the histrionic displays of disability that Colin Firth brought to his depiction of the monarch in Tom Hooper’s The King’s Speech. Where Firth portrayed George VI as constantly caught off guard by his stutter, as if it had just developed out of nowhere, Mendelsohn more realistically grapples with the king’s disability. This is a man who has dealt with this issue his entire life, and he knows to speak softly and calmly, pausing over certain syllables before easing over them, or rephrasing a statement on the fly if he senses he’s about to get tripped up.

George VI’s insecurity over his inadvertent rise to power finds an outlet in his intimidated dealings with Churchill, whose boorish nature clashes with the monarch’s royal comportment. Nonetheless, theirs is an odd mutual admiration society, with Churchill treating the king as an equal and making his chumminess feel like a compliment and not a complete breach of formality. In spite of his slight fear of the prime minister, the king never suggests softness or frailty, and the more comfortable he becomes around Churchill, the more he reveals his own inner strength and belief in the war effort.

In spite of these intriguing personality clashes, Darkest Hour never presents Churchill with a real intellectual challenge, and so the treatment of this important historical figure remains underdeveloped. Like most biopics, Wright’s film fancies itself a considered portrait of Churchill’s full range as a human being even though it goes about vigorously sanding away any truly upsetting aspect of his persona to ensure that no serious doubts are raised about his greatness. This is most obvious in an absurd scene in which the prime minister elects to take the Tube instead of a private car. As fellow passengers gawk at him in amazement, Churchill asks them how they feel about the Nazis, which yields gales of nationalist furor from the crowd, among them a prepubescent girl who passionately denounces fascism.

Treacly as the girl’s input is, it cannot compare to the laughable tail end of the scene, in which Churchill begins to quote rousing poetry about dedication and perseverance, only for a black passenger to complete the verse, reducing the prime minister to warm tears of affection. This is propaganda that sanitizes Churchill for the modern era, depicting him as the head of a rainbow coalition, his hardline views upheld by unanimous public support. The film reinforces only the most simplistic and patriotic vision of Churchill, its closed-off view of the man reminiscent of the many tracking shots that wind through the underground tunnels of the U.K.’s war command, constantly peeking into rooms with classified meetings as doors are abruptly closed to keep them secret. There are many corridors that the film could have explored to flesh out the contradictions that informed its subject, but they’re kept out of view, all the better to reinforce an image that’s been solidly in place for 70 years.

Review: The Death and Life of Marsha P. Johnson