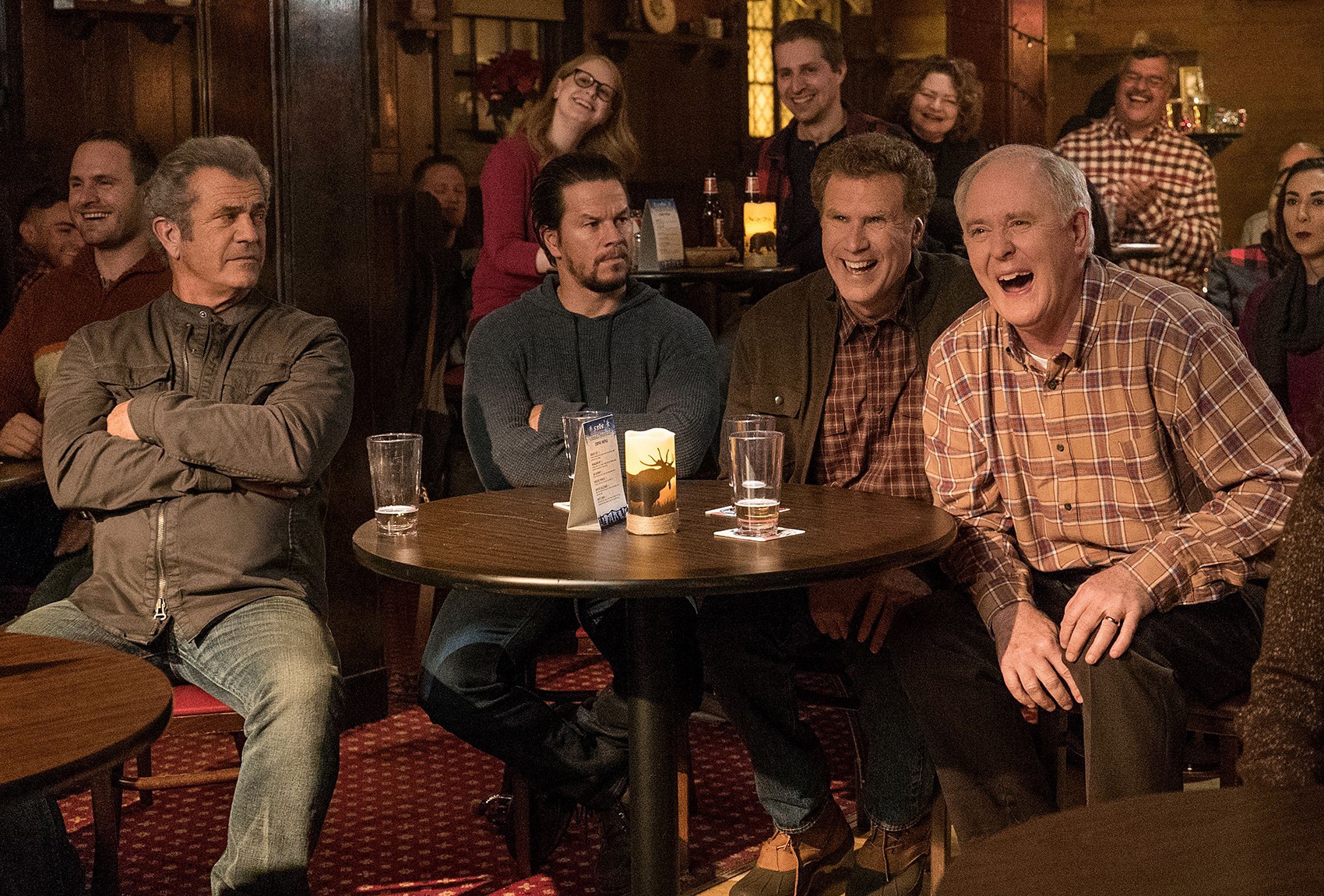 When future academics look back on the crisis of masculinity in late-2010s America, they could do worse than to watch Sean Anders’s Daddy’s Home films, a comedy franchise so steeped in contemporary male insecurity it’s practically begging to be unpacked in a gender studies seminar. Like its predecessor, Daddy’s Home 2 takes great delight in finding ways to emasculate Brad (Will Ferrell), a good-natured suburban stepdad who’s routinely humiliated for incorrectly performing the masculinity that comes naturally to Dusty (Mark Wahlberg), the biological father of his stepchildren.

Where the earlier film pitted Brad and Dusty against each other in a competition to prove their worth as fathers, the new film finds them seamlessly trading off parenting duties as “co-dads.” That is, until Brad and Dusty’s own fathers—Jonah (John Lithgow) and Kurt (Mel Gibson), respectively—join them and their families for a Christmastime cabin retreat. Brad and Jonah are openly and, in the film’s eyes, uncomfortably affectionate, greeting each other with a long, hard kiss on the lips—an image Anders treats as a Farrelly brothers-level gross-out gag. Dusty and Kurt, on the other hand, have a cold and resentful relationship, due largely to the fact that Kurt spent more time getting drunk and picking up barflies than raising his son.

The film portrays parenting as the death of manhood, a final surrender to the castrating effects of domesticity. Only those who patently refuse the responsibilities of fatherhood, as Kurt has done his entire life, maintain their virility. Meanwhile, those like Brad and Jonah who happily embrace their parenting duties are deemed effeminate weirdos and are accordingly subjected to all manner of wild slapstick violence, from a wolf attack to repeated snowball beatings to temporary death by electrocution. While the film ultimately pays some lip service to Brad and Jonah’s gregariousness, emotional availability, and supportive parenting style, that’s only after 90 minutes of mocking these traits as embarrassing character defects.

No film that features Ferrell, Lithgow, and Wahlberg is likely to be completely free of laughs, and indeed it’s hard not to at least crack a smile at some of their quirkier moments here: Wahlberg blithely wrapping his tongue around the script’s goofy wordplay; Lithgow warbling the delivery of the punchline (“buttquack”) to a kids’ joke; and Ferrell’s rubbery facial contortions as Brad hopelessly attempts to hold back tears. This sequel also wisely expands the role of Brad’s wife, Sara (Linda Cardellini), which allows for at least a few moments to explore the comedic possibilities of feminine insecurity. But ultimately these actors are locked into a formulaic, over-plotted Hollywood comedy that favors outsized set pieces, like a runaway snow blower tearing through Christmas decorations, over subtle actorly moments.

And, just as importantly, the actors have to work around Gibson, whose limp hound-dog shtick always feels a step behind his colleagues. It doesn’t help that the film fetishizes Kurt as a roguish man’s man while trading on Gibson’s off-screen reputation as a bad boy, a distinction he earned in part from the infamous racist and sexist tirades that kept him out of the Hollywood spotlight for years. Pairing him up with Wahlberg, who has his own history of racist abuse, only serves to underline the most toxic aspects of the film’s subtext—that callousness and violence are cool masculine qualities, while caring and compassion are effeminate and lame.

Review: I Love You, Daddy