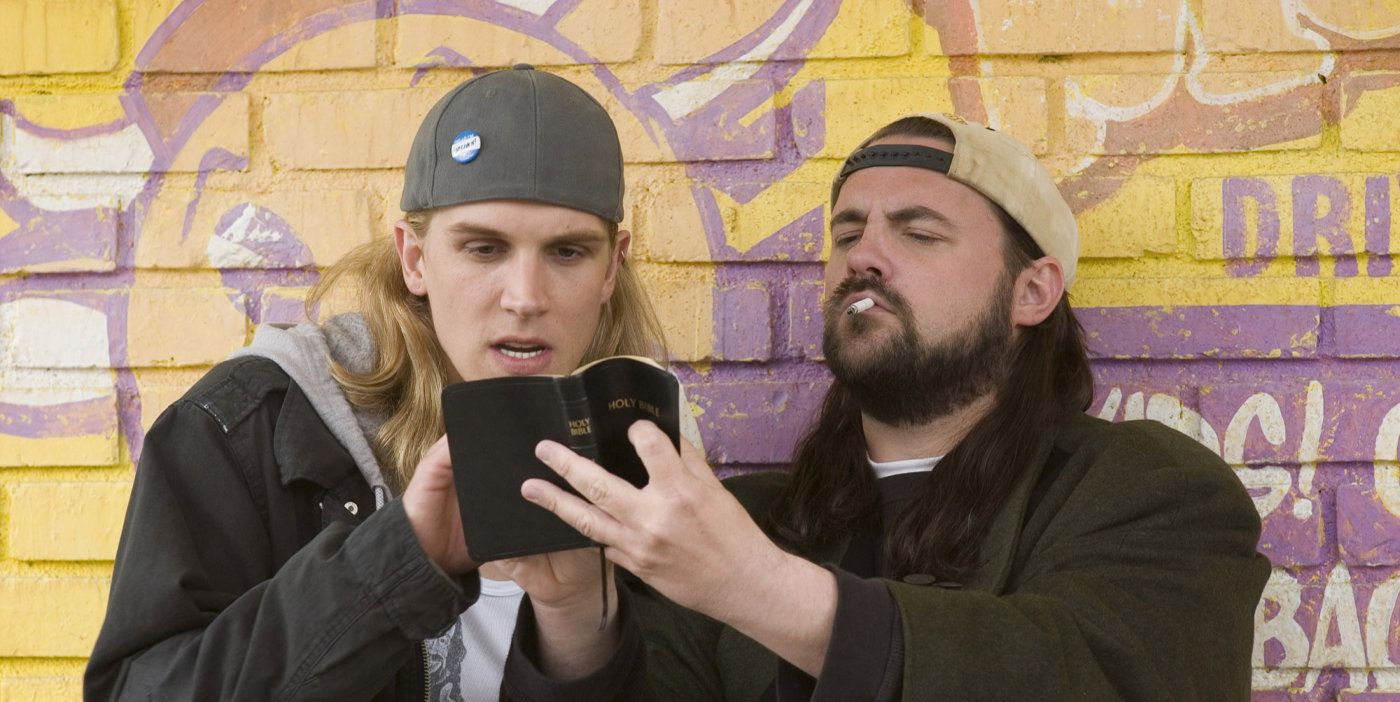 Retrogressively checking back in with the convenience store slackers of 1994’s Clerks, Kevin Smith goes all out in Clerks II justifying his sequel’s existence by turning it into a paean to the virtues of not growing up. And true to form, this return engagement with Quick Stop staffer Dante Hicks (Brian O’Halloran) and his rude, lewd best friend Randal Graves (Jeff Anderson) in many ways hews closely to its predecessor’s bawdy, pop culture-infatuated spirit. Chockablock with raunchiness, geeky arguments about the comparative merits of Star Wars and The Lord of the Rings, and characters who still believe that the finest way to spend time is by doing nothing, Smith’s follow-up finds its two motivation-free thirtysomething morons having moved on to jobs at fast food joint Mooby’s. It’s a dispiriting place of employment where Randal continues to hone his vulgar wiseass routine for customers (as well as for Trevor Fehrman’s Elias, a Transformers-loving Jesus-freak co-worker) but which represents an unproductive life in New Jersey that Dante—engaged to a rich, controlling woman (Jennifer Schwalbach) with whom he plans to relocate to Florida—wishes to escape.

What ensues is a steady diet of conversations about hardcore pornographic acts too absurd to offend and too limp to truly amuse, with Smith’s trademark prose—even in the mouth of pot-dealing spaz Jay (Jason Mewes)—often seeming as flat as his predictably primitive visual compositions. Nonetheless, despite the familiarity of his aesthetic cruddiness and narrative coarseness, Smith isn’t quite as stuck-in-the-mud as initial impressions might suggest, since the sappiness that began creeping into his work with Chasing Amy (and reached an apex of manufactured phoniness with Jersey Girl) now permeates even this heretofore slovenly, cynical nook of the filmmaker’s View Askewniverse. With Dante torn between his fiancé and his Mooby’s boss Becky (Rosario Dawson), and with Randal increasingly distraught over Dante’s impending desertion and the idea that life has passed him by, the film proves to be the summer’s latest portrait of stunted male development, though Smith’s conclusion—expressed via a surprisingly sincere jail cell speech by Randal—is ultimately that external expectations are less important than self-fulfillment.

It’s hardly a stretch to see this moral as Smith’s not-so-covert rebuke to those critics who wish he’d move past childishly gratuitous discussions of bestiality and “ass-to-mouth” protocol. And yet it’s a somewhat disingenuous one considering that, by having his originally indifferent, two-dimensional characters both express their heartfelt (hetero) feelings for each other and also come to sage realizations about themselves, the director partially turns his back on the first film’s carefree celebration of personal stasis. Regardless of this indecisiveness over just how much progress a man-child need reasonably undergo, Rosario Dawson manages to add charm and pathos to every squishily contrived moment in which she’s forced to participate, her effervescent sexiness and cool most joyfully demonstrated during two nonchalant responses to outrageous grotesqueries. Unable to happily mesh its soft and smutty sides, however, Clerks II—despite contending that it’s possible to go home again—mainly turns out to be the patchy work of a director stuck in an uncomfortable purgatory between his old-school comedic crassness and newfound dramatic mushiness.

Review: That’s the Way of the World