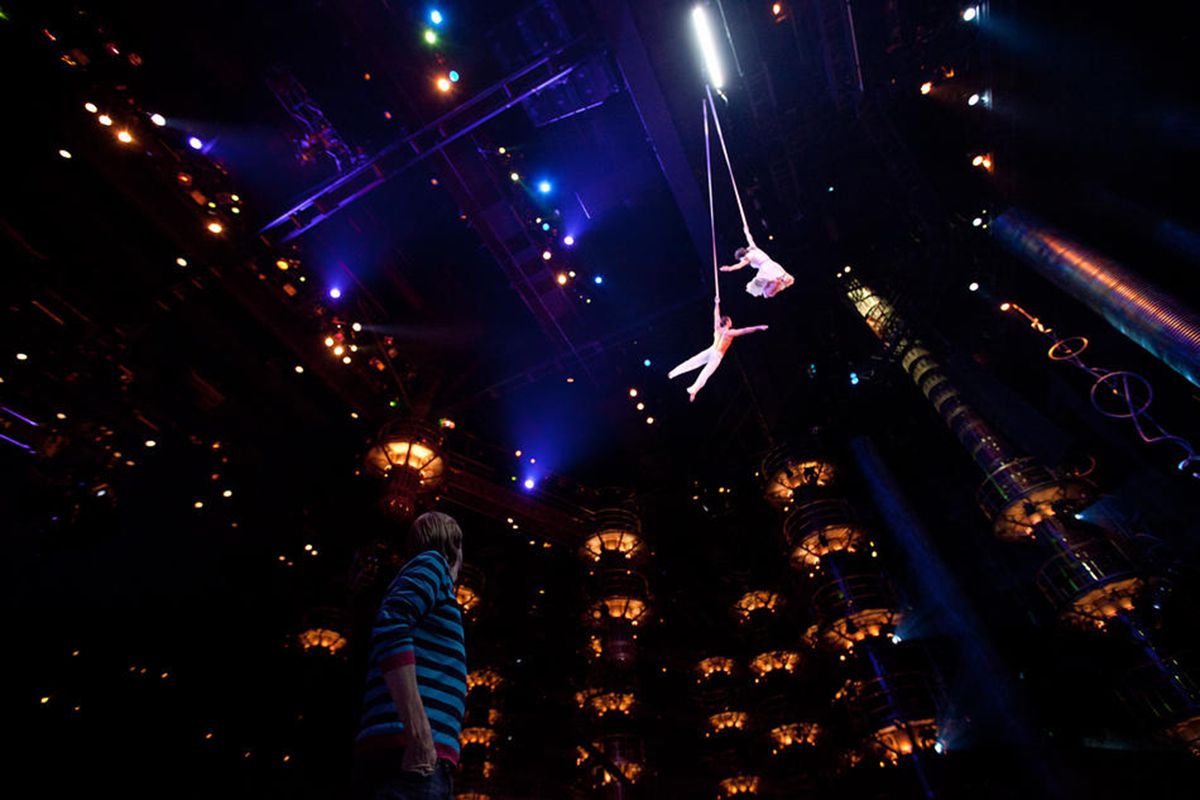 As a brand, Cirque du Soleil is a pretty safe bet for quality, its live shows defined by precision and grace despite their growing commercialism. So it’s rather sad, then, that Cirque du Soleil: Worlds Away 3D falls low on the stereoscopic totem pole, the phenomenon’s wonder reduced to one more bit of blasé, eye-popping excess. Given the ingredients, one would think the film would be at least somewhat marvelous, as all those acrobatics are surely amenable to the format, and sitting in the producer’s chair is 3D innovator James Cameron. It would seem, however, that Cameron merely supplied the fancy cameras, turning the project over to Shrek director Andrew Adamson and a team of craftsmen ill-equipped to thrillingly capture the action. Shot by music-video veteran Brett Turnbull, with additional filming by prolific live-music lenser David Mallet, the movie is something of a compositional nightmare—worlds away from the artistry so associated with Cirque. When the camera can even manage to stay with a performer, it’s in a manner that’s jerky and inelegant, and many numbers are filmed with scant regard for foreground-background harmony, a flaw especially odd for something requiring 3D glasses. Clowns, dancers, and trapeze artists all suffer visual amputation thanks to the poor framing, and the few memorable shots are better left forgotten, like the tableau of a contortionist’s spread legs lining up with a fountain’s V-shaped spray. Indeed, something seems a bit off in the universe when the big-screen version of the world’s preeminent circus act can be upstaged and out-classed by the latest Step Up installment.

The movie opens handsomely, and with promise, as a young woman, unnamed but credited as Mia (Erica Linz), approaches an old-fashioned circus with eyes wide, her pixie haircut and elfin features complementing the fairy-tale ambiance. She exchanges glances with a handsome acrobat known only as the Aerialist (Igor Zaripov), and during his act, the two both fall through a magical hole under the big top, winding up in a world that could have been co-imagined by Julie Taymor and Tarsem Singh. However briefly, the new realm’s unveiling maintains the mystery of the film’s intro, the camera cowering before a massive red curtain, whose drawing back is as ominous as it is exciting. What follows is an enchanting segment of Cirque du Soleil’s O, an aquatic-themed production with some Busby Berkeley-style choreography and swimming performers who actually move like fish. The pleasure is short-lived, though, as the cinematography’s failings set in fairly quickly, and the 3D engagement doesn’t go far beyond the kicking of water at the lens.

O is one of seven Cirque shows regularly performed in Las Vegas, and portions from all seven find their way into this film. The mishmash was a horrid decision on the part of the filmmakers, for not only do Mia and her Aerialist encounter the appropriately mythic allure of Mystére and Zumanity (the latter offering a standout scene that mixes the liquid with the planetary), they also stumble across the pop pomposity of Viva ELVIS, Criss Angel BeLIEve, and The Beatles LOVE, none of which mesh well with the core idea of being whisked away to a parallel realm. Not that the narrative boasts much congruity to begin with. Guided by a clown, whose presence, thankfully, helps keep Cirque’s wordless, vaudevillian nature intact, Mia essentially spends the movie window shopping, the only through line of her performance pop-ins being the search for her handsome high-flyer. There’s certainly the occasional awe-inspiring stop, like a set piece from KÀ involving a rotating, gravity-defying stage that evokes 2001‘s obelisk, but again, the photography renders the sequence a busy mess, never allowing viewers to calmly or satisfyingly take it in. With the emergence of films like Pina and Samsara, not to mention the rapid growth of mainstream concert docs, flicks about live performance seem as in vogue as 3D itself. But with Cirque du Soleil, the only way to fly is to catch a production in the flesh, which, given 3D ticket prices, probably won’t put too much larger a hole in your pocket.