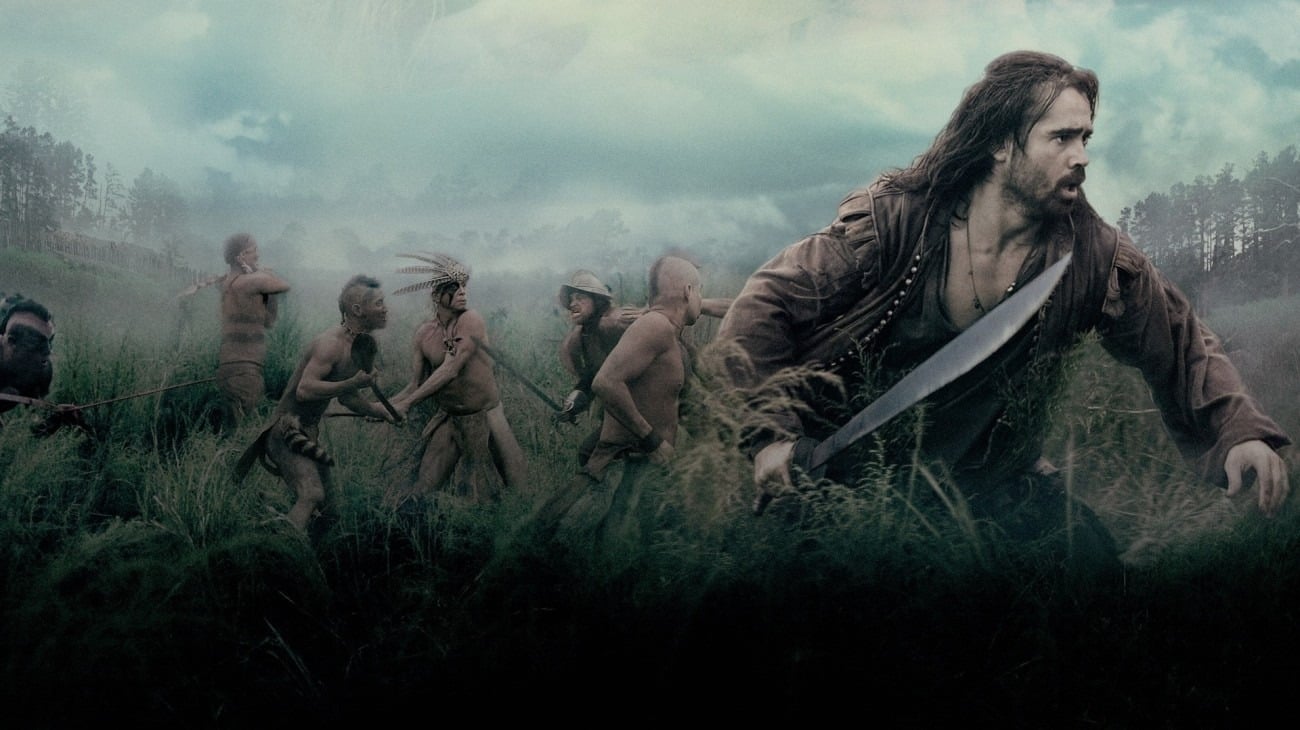 Hi everyone. First-time blogger Keith Uhlich here with my inaugural contribution to The House Next Door. This one’s been a long time coming and it’s appropriate that it’s finally finding a home on Matt’s blog since it’s about his favorite subject: Terrence Malick’s The New World. As I’m sure most of you know, there are two currently circulating versions of the film: the 150-minute pre-release cut (henceforth the first cut) and the 135-minute theatrical/home video cut (henceforth the second cut). I managed to see the first cut twice before it ostensibly vanished from the public eye, then ended up seeing the second cut three times, and it was during this latter period that I took extensive notes detailing the differences between the two versions.

I mentioned to Matt that I was planning on writing an extended essay about the two cuts for my primary publication, Slant Magazine, and Matt very kindly announced the upcoming essay (which he preliminarily described as “exhaustive”) in one of this blog’s numerous New World entries. Time passed. I wrote about nine or ten paragraphs that I was exceedingly unhappy with. More time passed. The film disappeared from theaters. And then I basically seemed to be of victim of what Al Swearengen very sagely advised on Deadwood: “Announcing your intentions is a good way to hear God laugh.” Well, he who laughs last: With the official release of The New World DVD this past Tuesday I’ve been given a handy excuse to once more make my intentions a reality. What follows is a numbered, point-by-point subjective breakdown of The New World’s two versions. Though I have full confidence in all the differences I note herein (having seen both cuts very close to each other) I did rely primarily on memory during my research, as I did not have the means to do a side-by-side comparison of the two cuts. I think it works better as a blog entry than as an essay and I hope it will act as a much-needed rebuttal to those (among them New World producer Sarah Green and film critic Roger Ebert) who have rather ridiculously stated, in one form or another, that “You won’t notice the changes.” I think this quite strongly proves otherwise.

1) Prologue and finale are exactly the same in both versions. Malick essentially leaves the entryway and exit (both scored to Das Rheingold’s ominously triumphal arpeggios) untouched while reworking the interior. Consider the film a river that, in the first cut is all about ebb-and-flow – Malick will often lead us down a dead-end tributary (typically signified by a cut to black) before retracing his steps and continuing along the main body of the river. In this sense he is as much an explorer in the first cut as the viewer is. The second cut is, conversely, about movement. Here Malick is our guide and the tributaries are not blocked, but flow ever onward, out of and back into the river’s main body. “Ebb-and-flow” and “movement”: two equally valid thematic metaphors for the destructive/creative forces that effectively birthed, and continue to shape, the United States, the latter metaphor being especially potent when taken in view of the cartographic end credits, which conclude in both versions with a westward pan over the soon-to-be-California coastline.

2) Expansion of the character of Captain Newport (Christopher Plummer). In both cuts, Captain Newport is the first face we see head-on. He more immediately becomes a background presence in the first cut, whereas the second cut gives him a grounding expositional monologue (explaining the exploratory intent of the Jamestown settlers) that offsets John Smith’s (Colin Farrell) searching internal voiceover. The Christian allegory is heightened in the second cut: Newport comes across more strongly as God the Father to Smith’s naïve, earthbound Son (Adam let loose in Eden). Smith is also given more time to silently explore his surroundings in the second cut, which I think encourages a stronger sense of audience identification.

3) John Smith’s voiceover begins at alternate points. Smith’s first voiceover line is different between versions: a question (“How many lands behind me?”) in the first cut, a statement (comparing “The Naturals” to “a herd of curious deer”) in the second cut. In the second cut, Smith’s formerly opening line (“How many lands behind me?”) now plays over a more harmoniously composed sequence wherein Captain Newport directs the Jamestown settlers offscreen while, onscreen, the Indians interact with the English soldiers and explore the newly erected Jamestown battlements.

4) Soundtrack mixed differently between versions, specifically with regards to voiceover placement. In the first cut, voiceovers are quite often placed over “non-sensible” images, where in the second cut the voiceovers are married to more “sensible” visuals. (This is in no way a declaration of preference for one over the other). A few examples:

a) During Smith and Pocahontas’ (Q’Orianka Kilcher) initial love scene, the moment where he says, “Love. Shall we deny it when it comes to us?” is in the first cut played over silhouetted images of the Indians preparing fishing nets. In the second cut it plays over a fade-to-black as Smith and Pocahontas caress each other.

b) Similarly, Pocahontas’ declaration, “I will be faithful to you. True,” is, in the second cut, said in rhythm with a lighting flash and thunder crack, where the line had a more arrhythmic placement in the first cut.

c) I’m also convinced that the throwaway moment where Smith says “Bad water,” over the image of a snake in a pond differs between the two versions. In the first cut Smith says the line and the snake swims down. In the second cut the snake swims down first, then Smith says the line. Either way, the movement of the snake in the water creates a kind of aural punctuation mark to Smith’s thought that plays differently according to its placement. This furthers my belief that Malick’s film is essentially an epic poem in motion that relies heavily on visual/aural interpositions.

5) More soundtrack examples. As evidenced by one of The New World’s recurring motifs (ears – e.g. from dialogue: “Cut off his ears!” and “They have no sound, captain!”), sound is an essential part of Malick’s aesthetic. To this end, the second cut mixes down certain lines of dialogue to near-subliminal whispers where they were more clearly audible in the first cut. Two cases in point:

a) When Smith teaches the word “Ear” to Pocahontas during their English lesson.

b) When Pocahontas comes to visit Smith at the snowbound Jamestown fort and, as she is about to leave, whispers, “Remember” to him.

6) Winter-to-Spring transition. After Pocahontas leaves the snowbound Jamestown fort, Malick transitions between winter and spring, though the second cut omits the tracking shot traveling behind Pocahontas as she trudges through the blizzard. The new winter-to-spring transition, nearly as effective, cuts from an ice-covered lake to budding spring flowers.

7) Certain shots omitted. In the second cut, the early scene where Smith is lost in the woods and attacked by the Indians is edited differently (omitting the establishing shot of an Indian camouflaged behind – we might say within – a tree), thus emphasizing surprise over suspense. Similarly, during the Indians’ siege on the Jamestown fort Malick has removed the bird that, in the first cut, flies overhead and anticipates the first fire of the cannons. What was once a single fluid tracking shot is now harshly divided by a jump cut. I think these omissions effectively emphasize the man-made nature of war – nature itself no longer participates in or flees from the attack. It is more of a passive observer, or (as in the mythologically suggestive moment when a star materializes next to a crescent moon) a god-like commentator.

8) Cutting on eyelines. There are more examples in the second cut of cutting on graphic eyeline matches, as when Malick links Opechancanough’s (Wes Studi) gaze from an English church to the trees of a topiary garden. The edits of the first cut tended along more jarring lines, though within their respective versions these edits make perfect sense.

9) Second Smith/Pocahontas love scene re-edited. This is perhaps the biggest change between the two versions. In the first cut, the second love scene between Smith and Pocahontas occurs in parallel action while Smith is listening to an Indian merchant. It seems to actually happen. The significantly shortened version in the second cut plays as more of a dream reverie, what Smith would like to have happen should he renounce his European heritage.

10) Pocahontas traded for a copper pot. The scene where Argall (Yorick van Wageningen) buys Pocahontas with a copper pot is considerably shorter in the second cut, more free-associative in the way it cuts between the object bought and the object sold, conflating contraband and commerce.

11) Parahunt. The role of Pocahontas’ brother Parahunt (Kalani Queypo) is significantly reduced in the second cut. This is, I think, one of the re-cut’s few missteps as Parahunt’s death scene now plays with much less emotional impact.

12) John Smith up north. When John Smith is shown searching for a northern passage to the Indies, the natives he is accompanying no longer speak in the second cut. They had some untranslated lines of dialogue in the first cut.

13) Transition between America and England. In the first cut Pocahontas’ journey to England is represented as a harsh cut to black, where in the second cut the camera skims effortlessly over ocean waves. This is the single image that I think visually and aurally represents the differences between the two cuts and I will here declare my personal preference for the theatrical cut’s edit if only because it possesses, to me, the same level of profundity as the famed bone-to-spaceship edit in Kubrick’s 2001.

5 for the Day: Motherhood