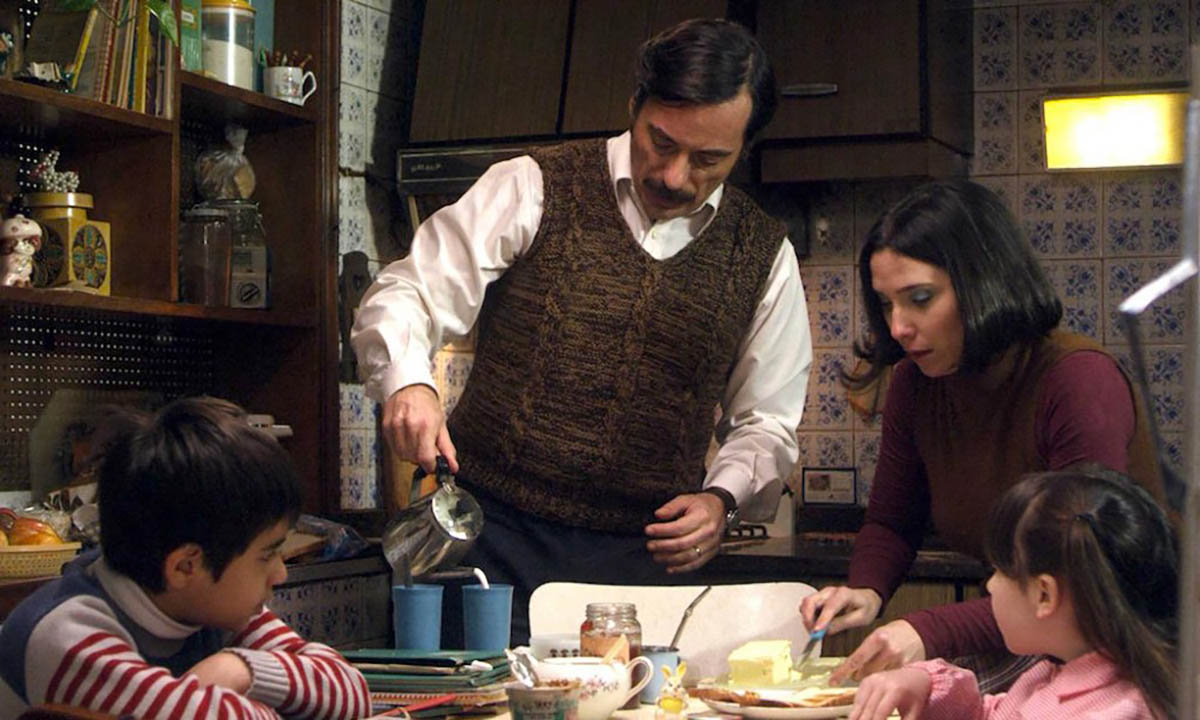 Co-written and co-directed by Francisco Márquez and Andrea Testa, The Long Night of Francisco Sanctis is about being awake to one’s historical context and how this context leaves no one untouched. The film’s middle-aged protagonist (Diego Velázquez) is a bored office-dweller who long ago, during college, used to write about working-class revolution. Yet his only dreams, at present, are about a raise. He’s in Argentina, in 1978, where a military dictatorship has been, for the past two years, “disappearing” thousands of dissidents. But this doesn’t seem to worry him, as he cultivates what modern Argentines would call a “fascist mustache,” like that worn by then de facto President Jorge Rafael Videla, to whom Velázquez, with his sunken cheeks and long face, bears a striking resemblance.

One day, Francisco receives a call from Elena (Valeria Lois), an old friend from his student days who’s now married to an air force officer. They meet later that afternoon and go for a drive, during which she reveals to Francisco the names of two people slated to be “disappeared,” along with an address, and beckons him to warn these militants before they’re kidnapped. It’s unclear why she wants to rescue these strangers—if they’re even strangers to her—and why she’s betraying her husband. It’s also unclear what reaction she expects from the visibly dumbfounded Francisco. Maybe she’s honestly concerned for the strangers or maybe she’s a mole. If she’s telling the truth, however, then Francisco must make a choice: either save the militants or return to his mundane life. He’ll spend the long night of the title deliberating over his decision, walking aimlessly down streets, alleys, and noisy bars.

Francisco’s uncertainty about what’s befallen him, and about why he’s been assigned this mission, is reflected in the ambiguous and dangerous cityscape he crosses like a paranoid flâneur. There, he sees or believes he sees, in the unfocused background, shifting shadows and spying eyes. We likewise notice suspicious activity at the corners of the frame, the urban space around him seemingly charged by his anxieties. The mere fact that he considers helping out the militants means that, in his mind, he’s already an enemy of the state and in danger. He’s internalized the repressive logic of the regime; its restrictive norms have taken root inside his mind. He no longer needs to be pursued by the authorities, since he’s preemptively pursuing himself.

Unlike other film about this dictatorship, The Long Night of Francisco Sanctis isn’t about those who disappeared or were detained by the regime (like Sur, Chronicle of an Escape, and Olympic Garage), nor about the children of the missing (like Cautiva, M, and The Blonds), nor about those who were directly involved or complicit with the military (like The Official Story or the recent Kóblic). Instead, it homes in on an everyman who’s politically unengaged and supposedly oblivious to the reality beyond his office and the apartment he shares with his wife and kids. The film interrogates what it means to stay on the sidelines during a military government and asks whether such a stance is possible. It broadens the number and nature of the victims. Because if Francisco has internalized the logic of the regime, has become his own policeman, then that exposes the damage inflicted by a dictatorship, which can so definitively alter someone’s vision of the world and their place on it.

If the violence of a dictatorship burrows so deeply, then it can outlive a dictatorship, perpetuate itself in language, politics, and culture, its influence felt decades later. (Márquez and Testa suggested as much when, at the Buenos Aires International Festival of Independent Cinema, where they would win the International Competition, they publicly denounced the city’s Minister of Culture, who’d recently dismissed, during an infamous interview, the count of 30,000 disappeared.) This is perhaps the broader, more unsettling point of the film. It portrays no tortures, no murders, no detentions, no disappearances; it only refers to them, often subtly. Even the physical evidence of the regime is minimized, reduced to random soldiers patrolling a park. The intention isn’t to obscure the atrocities, though this could perhaps be an unwanted (and, if so, troubling) outcome, but rather to focus on what few films on this era have examined, which is how even those who believed themselves neutral were, in fact, profoundly affected by a culture of silence and oppression, which continues to upset political discourse today.