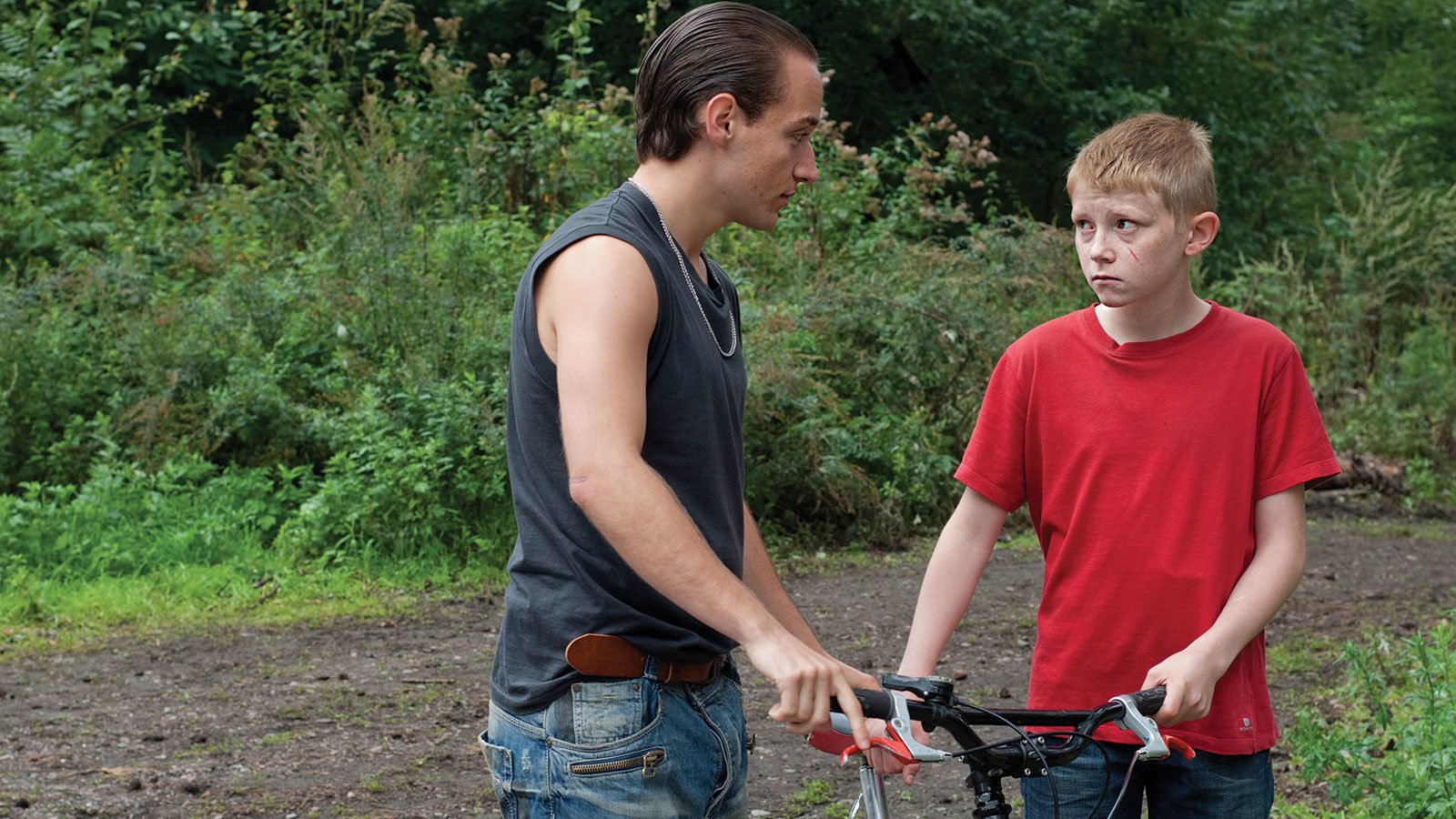 Famous auteurs occasionally cruise through material so smoothly we misjudge potentially complex efforts as minor. I fear Jean-Pierre and Luc Dardennes new film, The Kid with a Bike, will be seen as such a film and get overlooked due to its short running time, concisely linear storyline, and almost perfectly aligned mosaic of fatherly failures. Like their masterpiece The Son, the Dardennes insist on destroying stereotypes regarding familial relationships. Yet in The Kid with a Bike they craft an entire film around one young boy’s relentless pursuit of home and protection, packing each frame with a sense of unlimited persistence. Still, the child’s search for identity can be easily manipulated, and the film’s most cutting moments come when adult indifference preys on the gullibility of youth for selfish ends.

An enduring drive propels 11-year-old Cyril (Thomas Dorset) to ignore the writing on the wall that his young father, Guy (Jérémie Renier), has indefinitely left him to the care of a state-run facility. The opening sequence introduces Cyril’s durability and directionality, as the boy escapes and heads toward his now abandoned apartment looking for his father and beloved bike. This trend of catch and release continues throughout The Kid with a Bike—Cyril running or riding away from places he hates for those that might represent home. His struggle is consistent, with every scene dedicated to Cyril outmaneuvering adults and roaming from one father figure to the next.

Aside from Guy, other men start to influence Cyril’s perceptions, and it’s essential to understand that they all represent contrasting ranges of the economic spectrum. None are given labels like “good” or “bad”—just shades of the same combination of weakness and fear. Samantha (Cécile de France), a kind woman who adopts Cyril after he literally latches onto her during one of his attempted escapes, functions as the one solid foundation to the overwhelming acts of indecision plaguing the boy’s life experience. An essential scene finds Samantha warning Cyril not to “dream” about his father’s potentially good intentions, the young boy staunchly agreeing even though we know his expectations may have risen to tragic levels. The Kid with the Bike is most effective when it becomes about the levels of disappointment Cyril feels when pressed to the side of the frame, forced to watch the adult world from a place of inconsequence.

Stylistically, this is one of the Dardennes’ most fluid films, an approach that mirrors Cyril’s long rides on his bike through the streets and by the river. Long takes are of course the language of choice for the Dardennes, stalking the characters from a close distance with ease. But the inherent menace in the quickstep cinematography of L’Enfant is absent. Instead, there’s a breezy feel to the film’s aesthetic, a sense of space that feels at peace with the harsh realities of a child’s sadness. That’s not to say The Kid with the Bike isn’t hopeful, or even ideologically transcendent in its final moments. One question seems to linger above all the rest: How can any child buck the debilitating memories their parents pass down to them? Unlike most filmmakers, the Dardennes leave it up to Cyril to decide his own gospel, smart enough to soak in the good, the bad, and the ugly, and choose if father knows best.

Switching gears back to the Cannes Marketplace: Pina celebrates many things—movement, emotion, depth of field, but most of all, the legacy of Pina Bausch and the Tanztheater. Shot in glorious 3D, the film avoids the history-lesson route, producing a procession of hypnotic dance routines both onstage and in exterior spaces to explore Bausch’s influence through action, not words. Who better to perform this wondrous symphony than Bausch’s cadre of devout disciples, men and women of all ages who share short but essential asides about her teaching methods and temperament.

Instead of trying to represent each dancer as a singular personality, Wim Wenders structures the film around their collective adoration for Bausch and her many contributions to dance. During the live stage recordings, the large group feels like a violent sweeping tornado, picking up bodies and flinging them in contorted harmony until finally disappearing from view. The extreme flailing and gyrating are not spastic but instinctual, making the group look like an elemental force of nature in unison. But these performances are not perfect, not clean in any sense of the word. One elaborate set piece around a gigantic rock face and waterfall finds each member jettisoning buckets of water in the air as if the liquid was an extension of their bodies. Here, controlled chaos becomes a character trait.

The importance of elements to Bausch’s creations is also apparent in the routines performed in public places. There’s a stunning duet beside a public swimming pool where the ripples of the waves from passing swimmers add a contrasting motion to the performers. A motif of varying kinds of movement, both the constructed and the natural, is one of Pina’s great creations. Whether it’s a passing river or a jetting car, when juxtaposed with the dance performances, the paradoxical match is something to cherish. Later, a vignette containing a woman shoveling dirt on her dancing partner with expert precision takes the elemental connection to a near-primitive level.

Pina drifts through scenes rather seamlessly, following an invisible path of memory and perception that never tires or grows old. For Bausch, dance is a series of collisions, readjustments, and explosions of passion, and while sometimes horrific and dark, it remains physically vulnerable and emotionally true. Late in the film, a once flummoxed student remembers Bausch’s simple advice for her struggles: “Keep searching.” Wenders might relish the pure kinetics dancing across the frame, but he’s constantly searching for the perfect synergy of form and function as well. The well for both artists is full up with possibilities.

The political and social tension surrounding the recent imprisonment of Mohammad Rasoulof will inevitably influence the way his most recent film, Good Bye, is received at Cannes. A late addition to the festival’s lineup, along with fellow political prisoner Jafar Panahi’s This Is Not a Film, Good Bye unassumingly drops the viewer into the center of Tehran, where a beautiful young lawyer (Lelya Zareh) ideologically lives between a rock and hard place. Recently disbarred for participating in activist campaigns against the government, the woman happens to be pregnant and alone, her husband exiled to work in the desert because of his role as a political journalist. Fed up with Iran, she has decided to leave, aided by an off-the-books immigration specialist (Iran’s version of a coyote) who we see only once.

The narrative builds slowly, mostly from long takes and static shots of interior spaces cropped by crisp tile and stone. The whole film has a disturbingly clean look; grays, blues, and whites dominate the frame, as if the landscape itself was permanently stuck in a stagnant stasis. While the narrative is surprisingly linear for an art film, Rasoulof skewers the ruling state through a careful attention to details of human discontentment, not by sensationalizing free-speech martyrdom or oppressive forces. Small moments add up though: The lawyer wipes away nail polish on a public train to avoid conflict, gets spied on from afar by a man while smoking a cigarette at night, and given little moral choice when forced with a life-altering decision about her child. The woman isn’t even afforded the opportunity to decide between the lesser of two evils. Even tragedy isn’t a human right under the guise of this fundamentalist state.

Review: Louder Than a Bomb