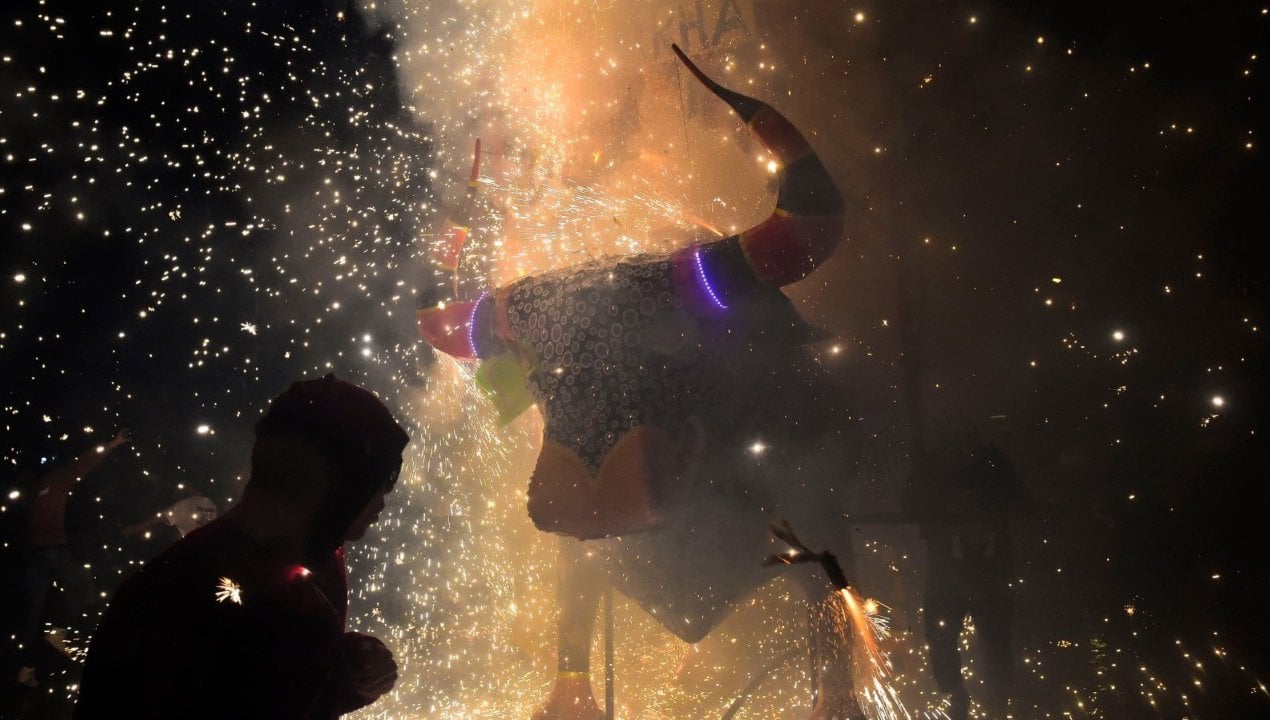 Just before Christmas last year, a fireworks explosion at the bustling San Pablito Market in Tultepec, Mexico killed at least 47 people and injured dozens. Brimstone & Glory was shot before that tragedy, and though it’s centered around a massive celebration, Viktor Jakovleski’s documentary vibrates with overlapping currents of danger, fear, awe, and revelry. Fireworks are a family business in Tultepec, as well as the city’s only major industry, employing three-quarters of its approximately 90,000 residents. Cautious children help their fathers toss small cardboard tubes in beds of combustible powder, mothers hang them from clotheslines, and elders (including one who’s lost his hands) peddle them in marketplace kiosks.

Though the documentary casts a watchful eye on plastic jugs of volatile liquids, it also hurtles into acts of daredevilry. In a few insanely vertiginous shots, men equipped with GoPro cameras scrabble unharnessed up flimsy, stories-high wooden structures wrapped in explosives; one of these castillos (or little castles) is hit by lightning, and the workers mostly groan about the night’s light show being compromised. A percussive soundtrack performed by Dan Romer and Beasts of the Southern Wild director Benh Zeitlin (who is also one of the film’s producers) adds an overeager gloss to the preparations, which are full of propulsive motorcycle drive-by footage.

Much of Brimstone & Glory’s fluid handheld photography, filmed by Tobias von den Borne, exudes a Steadicam grandeur, though the paths of individual shots often seem random and incomplete. This is part and parcel with the documentary’s broader structure, which lies in a murky middle between voguish sensory ethnography and a more conventional portrait of community and industry. Jakovleski frames the action around two major events of Tultepec’s National Pyrotechnic Festival: a contest involving castillos and a parade of dazzling papier-mâché toritos (or little bulls) strapped with explosives and wheeled around town for gathered thousands to admire.

The film excels at capturing the debauchery and reverence that propel the festival, which honors San Juan de Dios, patron saint of fireworks makers and, by extension, Tultepec itself. Medical workers triage singed patients and drunken tourists marvel at the sights and dance through showers of sparks; it’s a chaotic bacchanal that Jakovleski is keen to point out is the work of hundreds of artisans, from those who produce elaborate explosives to those who create bulls in the image of everything from Freddy Krueger to a translucent creation that suggests the work of Buckminster Fuller.

Through its energy and inherent beauty, Brimstone & Glory hits concurrent notes of peril and bliss, but even at a scant 67 minutes it can seem a bit aimless and scattershot. Like Jeff Malmberg and Chris Shellen’s Spettacolo, the film has the elements of a tribute to artists, community, and a home defined by one grand celebration, but too often it comes off as a mere aesthetic exercise, occasionally breaking into underwhelming interludes of slow-motion conflagrations captured with a new, high-speed HD camera called the Phantom. In the film’s wanderings among the industry and people of Tultepec, it occasionally circles back to a preteen boy named Santi, the son of a fireworks maker who seems simultaneously terrified of the trade, in awe of the starbursts it creates, and obliged to keep the family business going. He’d have made an ideal character to spend a full hour with.

Interview: Michael Stuhlbarg Talks Call Me by Your Name and The Shape of Water