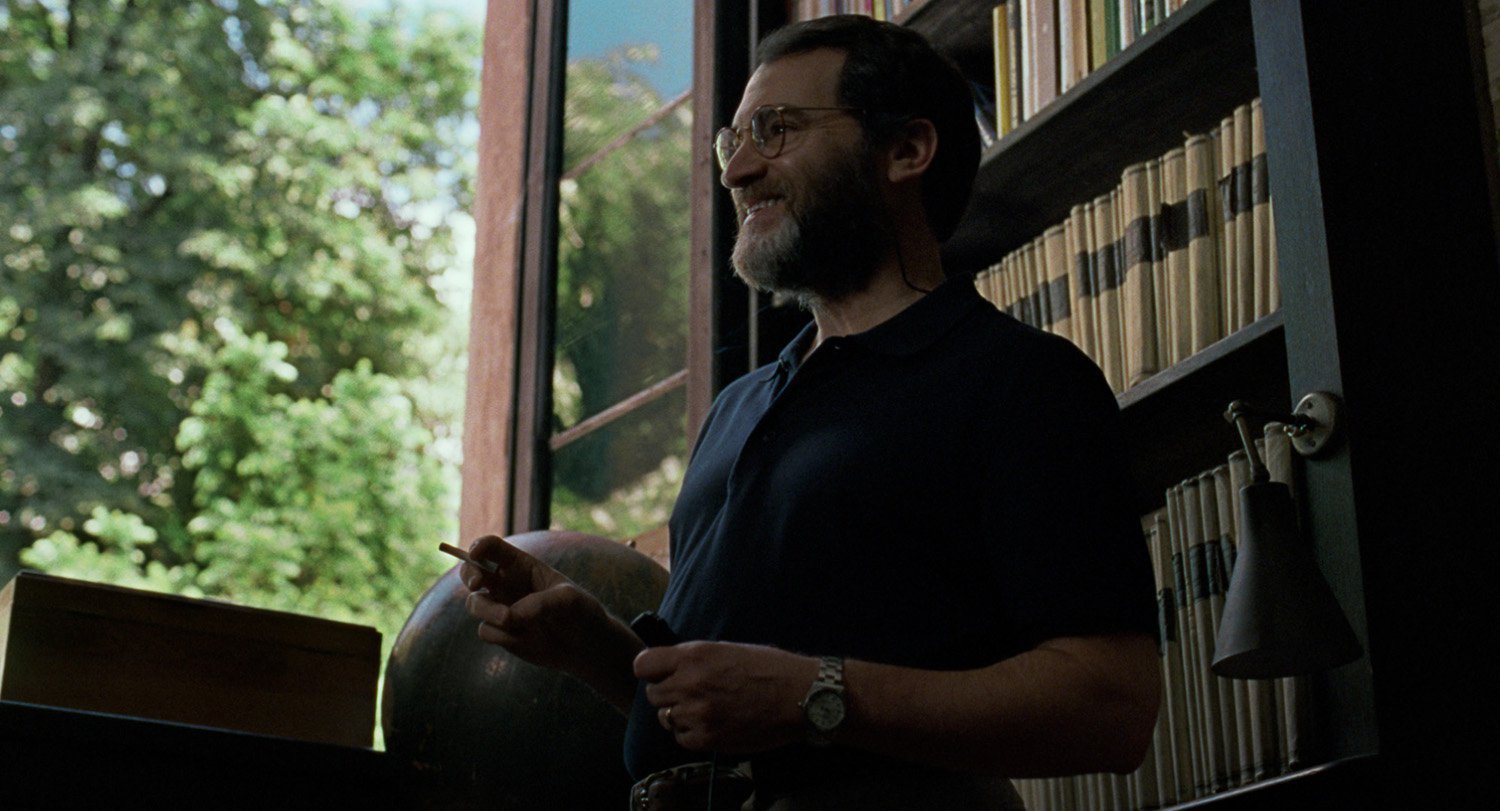 Michael Stuhlbarg was already beloved by fans and critics of New York theater, especially for his role as the childlike, mentally disabled younger brother in playwright Martin McDonagh’s The Pillowman, when he rose a few rungs on the ladder of fame by playing the title role in A Serious Man. Joel and Ethan Coen’s masterful tragicomedy got much of its soul from Stuhlbarg’s performance as a middle-class, middle-aged Midwesterner whose comfortable life is upended by a baffling onslaught of calamities large, small and ridiculous. Since then, Stuhlbarg has disappeared into roles ranging from quietly terrifying gangster Arnold Rothstein on HBO’s Boardwalk Empire to loyal sidekick Sy Feltz on season three of Noah Hawley’s FX series Fargo to brilliant but schlubby Andy Hertzfeld in Danny Boyle’s Steve Jobs.

The increasingly in-demand actor met with me at his publicist’s Midtown office to discuss two of his latest films, Luca Guadagnino’s Call Me by Your Name and Guillermo del Toro’s The Shape of Water. Stuhlbarg speaks softly and deliberately, often pausing to think about what he wants to say, yet he’s no tortured artist. Smiling or laughing frequently, he often used the word “joy” as he talked about studying with Marcel Marceau, growing up as “the luckiest kid in the world,” and whether he would want to play a character he hated.

You studied drama at Juilliard and in London—and in Lithuania, which isn’t part of the standard route to dramatic success. How did you wind up there?

I was part of an exchange program at Juilliard. Our third year, we were asked to participate with the Vilnius Conservatory. They came to Juilliard and studied Tennessee Williams and American theater forms, like musical theater—took tap dancing with our teachers—and then put on a show to show us the things they’d been working on. And then we went to Vilnius, my whole class.

Did they have a different way of approaching acting there?

We were studying Chekhov, particularly. We got to see some theater as well. It sort of revealed to us that there’s limitless ways of telling the classics. There were some beautiful expressionistic performances of Chekhov’s plays that we saw that cracked open what could be thought of as a rigid form.

So it was less realistic and more expressionistic than what you’d been doing?

Yes! Very much so. Nina, instead of talking about being a seagull, she became a seagull. [He stretches out his arms like a bird’s wings.] Things like that.

You also studied with the great French actor and mime Marcel Marceau. Why did you want to do that, and what did you learn from him?

I was in college at UCLA, and they were offering a scholarship—a full year—to study with him in France. I didn’t know anything about mime, and I don’t think I ever wanted to be a mime, but I loved throwing myself physically into roles in the theater and learning how to tell a story with my body alone. I thought it could be useful. And at that time, the idea of a single person on the stage to tell a story all by himself without the use of words, only with his body, was an extraordinary kind of a thing. So I leapt at the opportunity to audition for him.

They couldn’t decide upon four of us, so instead of sending one student for a whole year to France, the four of us got to go to Ann Arbor, to the University of Michigan, and studied with him for a summer.

So did you get out of it what you’d been hoping to?

I grew to have a whole other appreciation for what people can do to be more expressive. The vocabulary and the language of physicality and the discipline of physical movement. I was dazzled by what people could do. I knew that I loved words. I love classical theater. I love language. I just wanted to learn some new things, and what a wonderful opportunity to do so.

Call Me by Your Name is classic realism, but The Shape of Water is a highly stylized fantasy. A lot of the characters are more archetypes than characters, but your character feels like a real person, very understated yet powerful in the way that your characters always do. Was it your decision to play it straight, or did that come from Guillermo del Toro?

Oh boy, that’s interesting. I think it’s the circumstances that the character finds himself in, maybe? Being stuck between two worlds. I didn’t make a conscious choice to articulate what I was supposed to be going through.

You sometimes do play things in a broader, more stylized way.

Depending on what the style of the piece is, sure.

And some of the people in this film were doing that, like the guy in the shop.

But you were going a very different way.

Guillermo did a really interesting thing that no other director has ever done for me, in the whole 30 years that I’ve been doing this, which is that he wrote out a biography of the character beforehand. A biography is most often created by the actor to fill in the blanks of what’s given to you text-wise and to enrich the life that you hope to present to viewers, but his was filled with things that I never would’ve come up with. Where they came from, what they lived through, their preferences for food. The smallest, most delicate things. He said, “Use it if it’s valuable, or don’t; create your own things.” I just devoured it, and utilized the generosity of his love for his characters.

What was it like to act with Timothée Chalamet in Call Me by Your Name?

He’s extraordinary. Really. He’s ever-present and unpredictable and joyous, and I can’t wait to see what he does next. I got to see him on stage before we did this film, in John Patrick Shanley’s The Prodigal Son, and I absolutely felt he was a wonderful choice to play Elio. He seemed to encapsulate all the things, physically and otherwise, that Elio is in the novel.

That speech at the end of Call Me by Your Name, which is in a way the moral of the film, is also a kind of emotional fantasy, like something a teenager might wish that his father would say while he lies awake feeling miserable and misunderstood. It sounds like your father was a real mensch. Did you draw on anything about him, or your relationship with him, for that scene?

You can’t help it. Yeah, my father was a mensch. I was the luckiest kid in the world. My parents gave me everything I you could ask for. If I was able to convey any sense of tenderness or compassion, it’s in direct line from them.

Were your parents supportive of you becoming an actor?

They were concerned, like all parents would be, for their young kid. [laughs] But they saw me in a play in high school, and I guess they thought I was pretty good, so they said, “Let’s support him.” They told me to give it a shot. But they never pressured me to be anything other than who I was. They encouraged me to try everything, to do everything, but to be safe in the process.

You’ve played a few Jewish characters, but their Judaism means different things to each one. The Perlmans in Call Me by Your Name play it way down. I forget Elio’s exact phrase, but it was something like secretively Jewish—

And in A Serious Man your character was like a Jewish Job, getting hit with all kinds of disasters and trying to make sense of it all through his religion. What role does being Jewish play in your life? I’m thinking specifically of something I read where you said kindness is very important to you.

These’s a tradition in Judaism of trying to be a mensch, which goes along with the custom of taking the day on Yom Kippur to think about who you hurt during the past year and how you can do better next year. Do you think the way you value kindness comes out of the Jewish tradition you were raised in?

Does that play into your work in any way?

It must, in one way or another. We bring ourselves to the work that we do. If I’m fortunate enough to be able to portray a character who’s compassionate, I feel like I’ve got a wealth of things to draw on.

Do you have to like all the characters you play?

[laughs] If you’ve got a choice in the matter, I guess you can decide not to play somebody. It helps to find something in your character that you like, but it may also be a challenge to play someone who you have contempt for. I don’t know if I’ve ever played someone who I’ve had absolute contempt for. I’m not sure if I necessarily want to put that out there. Unless it was a piece in the puzzle of the story that was necessary. But sometimes the work can be so hard that you have to remind yourself why you took the job in the first place.

And what’s your answer to that? Or is it different for every job?

It’s different, but there’s always an element, if you’re lucky, where you can say: “This resonates with me,” or “This is something that I want to be heard.” There has always been an element of that, or joy, or something in the story for me.