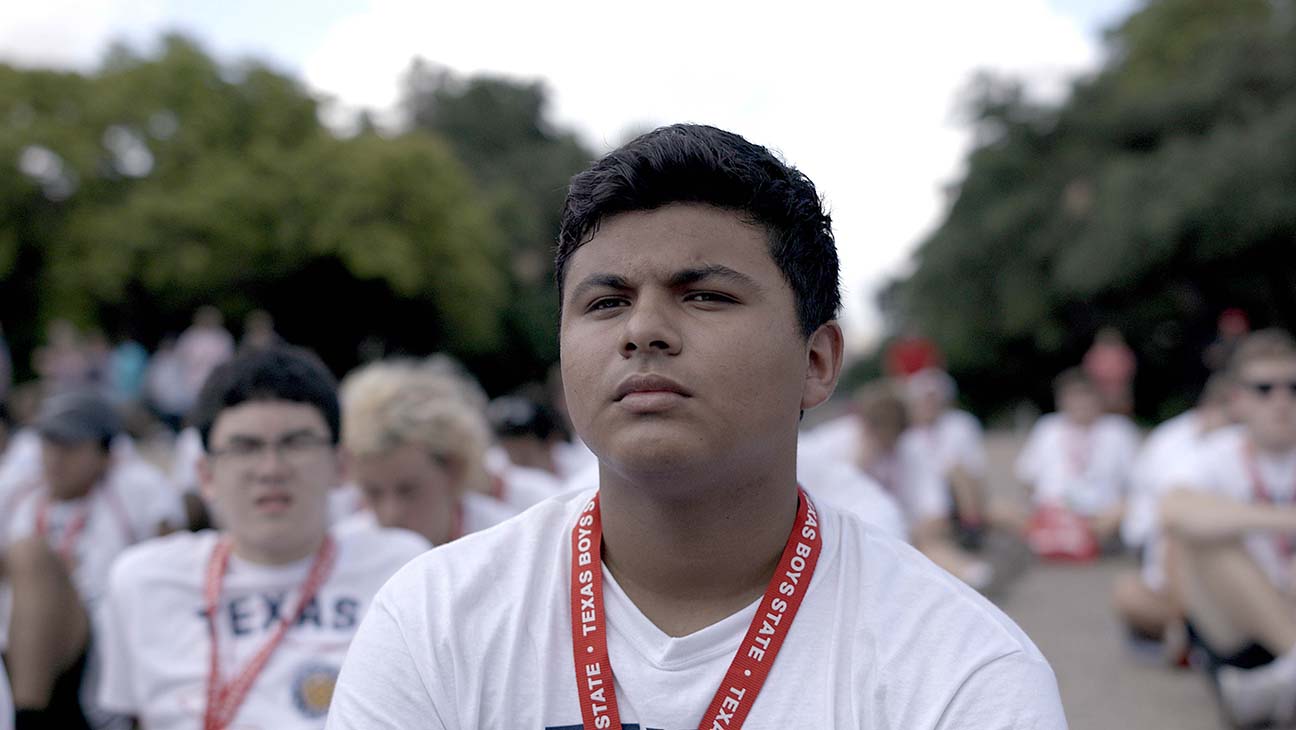 Initiatives to get young people involved in politics are often organized in service of a given party agenda, but the “non-partisan” Americanism of the American Legion’s Boys and Girls State programs differentiates them from groups like the Young Republicans, while somehow also managing to make the blind enthusiasm of youthful politics even more off-putting. Amanda McBaine and Jesse Moss’s Boys State offers a skeptical take on the eponymous summer leadership and citizenship programs. A disconcerting mix of a Boy Scouts outing and Model U.N., the Boys State program, based on the evidence presented in the film, appears to be less an educational tool or a communal gathering of like-minded youth, and more an indoctrination into a cultish fetishization of American power politics.

McBaine and Moss predominantly focus on four boys participating in the Texas iteration of the annual gathering in which, as the opening-credits graphics inform us, such dubious luminaries as Dick Cheney and Rush Limbaugh also participated in their youth. While the program’s participants are overwhelmingly white, able-bodied, and conservative, the four boys who rise to fake-government power don’t quite fit that stereotyped Texan mold: René Otero is a black, liberal Chicago transplant (“I’ve never seen so many white people in one place in my life,” he confesses at one point); Steven Garza is Latino, and was inspired to get into politics by Bernie Sanders; Ben Feinstein is a Reagan-worshipping arch-conservative with two prosthetic legs (he had meningitis as a child); and Rob Macdougall, a breezily confident white boy who publicly plays the right-wing All-American, privately harbors pro-choice convictions.

After the program’s 1,100-plus participants arrive in Austin—all clad in the same white uniform shirts, like members of a religious mission—they’re randomly split into two political parties, the Federalists and the Nationalists, in reference to the constitutional debate of the 1780s, though the particulars of that nation-founding conversation play no part in how each party is meant to behave. Instead, each group organizes and forms a contemporary party platform, and, using the actual facilities of the Texas state government, runs candidates for governor against one another. This, presumably, is how it came to pass that in 2017, the year before the documentary was filmed, Texas Boys State voted to secede from the Union.

One might be tempted to conclude that the Nationalists won the mock gubernatorial election that year, but, again, the party names mean nothing. Indeed, Boys State shows the entire program as a form of social conditioning that compels its participants to talk without saying very much at all, and teaches them how best to make cynically calculated power moves. The worst culprit in this regard is Ben, who arrives fully formed as a self-styled political wheeler and dealer, and who, despite espousing some conservative convictions, mostly sees politics as a zero-sum game of self-fulfillment. Elected as the Federalists’ state chair, Ben runs his party by the mantra that “you have to find divisive issues in order to differentiate yourself at all.”

In such moments, McBaine and Moss capture the way teenagers can be adept at obliviously, even innocently articulating the subtext of the politics of corruption. After confessing he gave a stump speech misrepresenting his true views, Rob explains with a final note of uncertainty, “That’s politics…I think.” Few of these kids really have a fully formed idea of their own political identity: The purportedly left-leaning Steven, while achieving unlikely popularity among a body politic almost unanimously against background checks and immigrant rights, professes an open admiration for Napoleon Bonaparte. In his final pitch for governorship he even quotes the French emperor who displaced a democratic republic.

Boys State initially looks askance at all this naïve politicking, mixing a sympathetic view of the teens with ironic commentary, delivered by judicious cuts to interviews or metaphorical images that undermine the sentiment of the prior scene. After a visibly nervous Steven, uncertain of his political platform, rises to the occasion with a primary debate performance that’s surprisingly fluid and honest-sounding but absent of detailed policy proposals, there’s a cut to a racoon outside the debate hall diving headfirst into a trash can. Point taken.

At the same time, however, Steven’s rise through the ranks of the tumultuous Nationalist party—a concurrent plotline sees René, the group’s chair, doing battle with racist party members want to see him impeached and removed for declining to move forward with a secession platform—gets plotted as something like an inspirational tale, the American dream in miniature. It’s easy to identify with the humble Steven as he forms an inchoate political voice, but the way that voice only reflects the crowd’s own pleasurable ideal of itself back to it constitutes a development more tragic than the documentary appears to realize.

In assembling Boys State as a rise-to-the-top narrative, the filmmakers dull a potential critical edge that might have allowed them to ask more pointed questions about actual policy, history, and political science at this camp. If women have nominally been full participants in U.S. politics since 1920, then why does the American Legion train politically interested youth to address only the (often frivolous and always underthought) concerns that arise from homosocial teen groupings? But even if it sometimes emphasizes the individualized drama of a political contest over such critical matters, Boys State presents a fittingly dire microcosm of American politics, suggesting that our political system as an exclusionary and essentially contentless popularity contest functions for no one but those jockeying for power.

Review: Martin Margiela: In His Own Words Celebrates Secrecy as Fashion Power