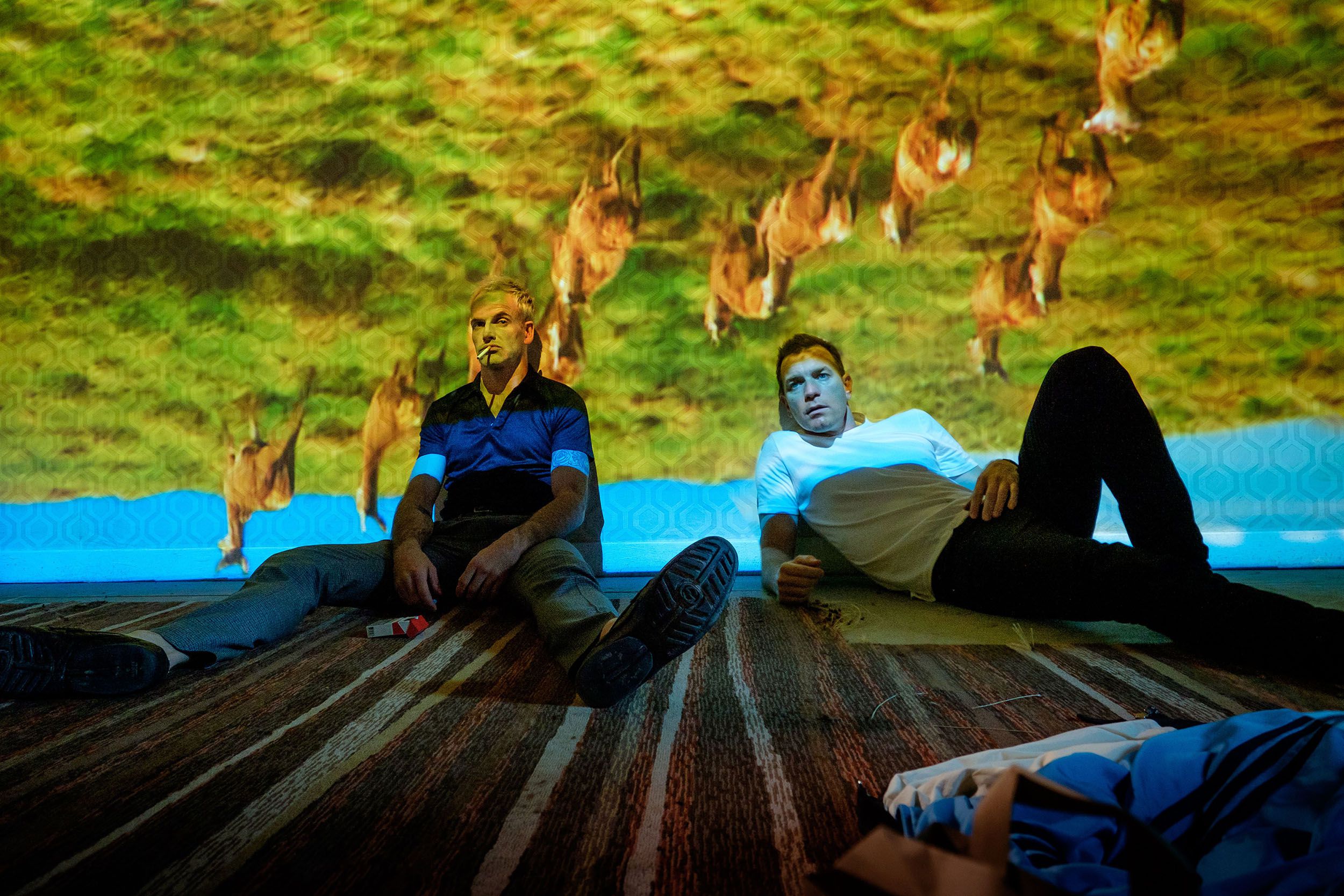 Compared to its predecessor, T2 Trainspotting is a relatively aimless and sedate experience. But that’s to be expected for a film that’s largely about people trying to move on from the follies of their youth and finding themselves unable to let go of the past. Director Danny Boyle’s style this time around fully reflects this: Dialing down the devil-may-care impulsiveness that he brought to disquietingly exhilarating effect in Trainspotting, he allows a reflective melancholy to seep through even the film’s loosest sections, a quality that was nowhere in evidence in the original because the characters were too busy getting high or trying to avoid falling back into the habit.

Your investment in the continuing adventures of Renton (Ewan McGregor), “Sick Boy” Simon (Jonny Lee Miller), Spud (Ewen Bremner), and Begbie (Robert Carlyle) depends entirely on how much affection you had for them when they first blazed through the pop-culture landscape back in 1996. Trainspotting was animated by a certain working-class anger toward a political system in the U.K. that led these people to turn to heroin as their only solace. That sociopolitical subtext is absent from this sequel, which is generally content to coast on viewers’ nostalgia. T2 Trainspotting is unnecessarily crammed with fan service: Kelly Macdonald’s Diane, who was a teenager when Renton had sex with her in the original, feels crammed into the story, and Shirley Henderson only gets a single line as Spud’s ex-wife, Gail. But the many shout-outs to the past are appropriate given the film’s rather pessimistic theme of people’s inability to change over time, despite their efforts.

Thus, it’s fitting that the hopes and dreams that Renton chanted to himself at the end of Trainspotting as he stole all of that drug money from his friends have basically added up to nothing in two decades. And perhaps those hopes and dreams are the main reason why he tempts himself to resume his former go-nowhere life by returning to Edinburgh. Things are no better for the other fellows: Spud remains a heroin addict; Simon is reduced to owning a bar that barely anyone frequents; and Begbie is, if anything, even more psychotic than ever, escaping from prison with vengeance on his mind.

The only significant new character introduced in T2 Trainspotting is Simon’s love interest, Veronika (Anjela Nedyalkova), a Bulgarian sex worker who offers the closest any of these characters have to some kind of personal salvation. She collaborates with Renton and Simon to try to turn Simon’s struggling pub into a brothel, and when Spud enters their plans to help with the renovations, she convinces him to write down some of the stories of his past, thus giving this film an unexpected self-reflexive angle that celebrates the clarity of hindsight that’s possible through artistic creation.

That latter literary thread offers the only genuine surprise in the film. Boyle and screenwriter John Hodge (adapting Irvine Welsh’s own follow-up to Trainspotting, Porno) largely depict this quartet of deadbeats shooting the shit with each other, reflecting on the past, and taking stabs at self-improvement that prove to be incremental at best. (Here, progress is measured by whether Renton is finally able to listen to the entirety of Iggy Pop’s “Lust for Life” and not shut it off immediately in response to the memories it evokes of his heroin-addicted younger days.) “The world changes even when we don’t,” laments Renton late in the film. Those who go into T2 Trainspotting already interested in where these characters ended up may find this line poignant, possibly even profound. Others approaching this group with indifference are bound to see the film as a received bit of world-weary cynicism, unsupported by a story that plays like a fans-only nostalgia trip.