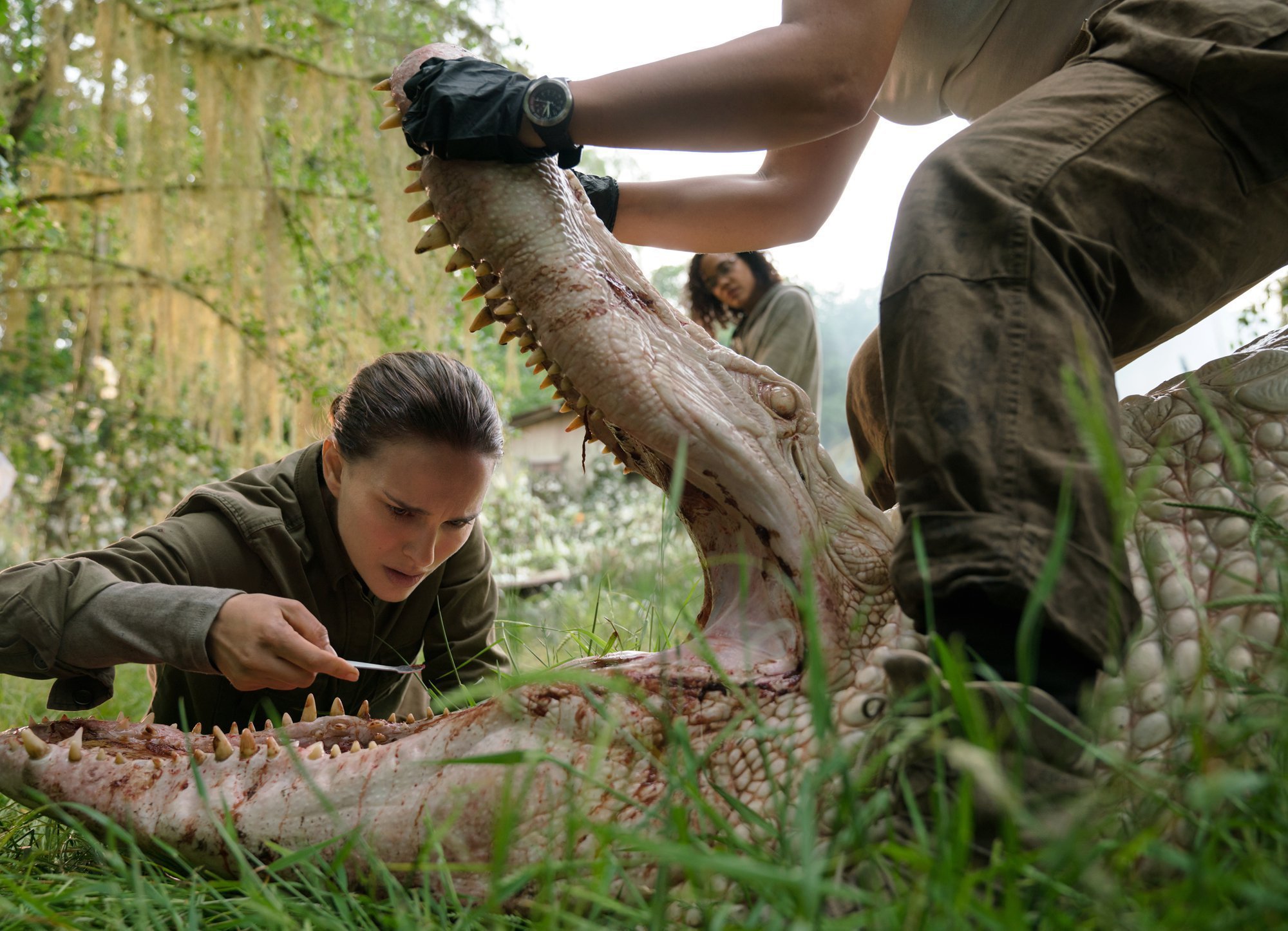 Many modern film adaptations of popular novels are slavish to their source material. Admirably, writer-director Alex Garland doesn’t so much adapt Jeff VanderMeer’s 2014 sci-fi bestseller Annihilation for the screen so much as he riffs on the novel’s trippy happenings, creating something almost entirely his own. Garland has the genre bona fides, and the writer of Sunshine and writer-director of Ex-Machina handles Annihilation’s hallucinatory setting with an appropriate and compelling sense of shifting unreality. But by leaning too hard on Hollywood clichés—and almost tumbling over into sexism—he proves that he wasn’t the right writer-director for this particular job.

Natalie Portman stars as Lena, a Johns Hopkins University biology professor and Army vet mourning her covert-ops husband, Kane (Oscar Isaac), who disappeared a year ago while on a mission. Then he turns up at their home—confused, unaffectionate, and bleeding from the nose. The ambulance she calls for him is cut off by an armada of black SUVs, out of which pour armed men who remove Kane and sedate Lena. She’s brought to Area X, a secretive government base observing a mysterious ecological, and perhaps divine or extraterrestrial, phenomenon they call the Shimmer—the place where Kane had been, and from where he and he alone has inexplicably returned.

What’s happening in that tropical landscape—mostly contained within a national park, though its borders are expanding—is, well, weird, involving a possibly alien recalibration of all DNA and organic matter: plants are mimicking people, alligators are crossbreeding with sharks, and human consciousness is being imprinted onto hideous boar-bear hybrids. It’s a realm of biological fluidity, as if all cells were being mixed together in a big pot and ladled back out into the world in all sorts of wacky combinations.

Geoff Barrow and Ben Salisbury’s score gets at that unsteady natural imbalance, mixing acoustic, finger-pickin’ folk with dissonant droning, respectively evoking the organic and the inhuman. Cinematographer Rob Hardy captures the Shimmer in hyper-surrealistic fashion: The film’s images often looks as though they were shot through melting glass, illuminated with all the colors of a pastel rainbow—and midday skies sparkle with rays of orange and purple. Early on, a striking close-up of Lena and Kane holding hands across a table is lensed through a glass of water, beautifully suggesting Annihilation’s swirling impermanence of living and loving things.

On the page, VanderMeer drops readers into this unstable world, enveloping us into the enigmas of characters and setting. By contrast, Garland builds things up slowly, patiently establishing the characters, their realities, and the place they’re heading into, structuring the film like a kaleidoscopic, psychedelic detective story. As Lena teams up with a squad of female scientists—led by Dr. Ventress (Jennifer Jason Leigh) and including Anya Thorensen (Gina Rodriguez), Cass Sheppard (Tuva Novotny), and Josie Radek (Tessa Thompson)—heading into the Shimmer to investigate it, Annihilation gets momentum from the deeper it pushes into the uncertainties of ecology and the self. The members of previous expeditions have either been killed by whatever lies within, or gone mad and killed each other.

The things that the team find inside the Shimmer are frightening and bizarre, building up to a climax in which one character turns into a ball of light and another is trapped in a pas de deux with a mercury-skinned mimic. Another one had already wandered off willfully to become a tree, a rather lazy way of writing off a character who’s no longer narratively necessary. Many of VanderMeer’s most outlandish details, however, have been cut. There’s no slug monster made of light transcribing apocalyptic sermons in fungus along the breathing walls of a submerged tower. In fact, the tower—the novel’s most significant location—barely appears. But that’s fine, as Garland should be free to do to the book what the Shimmer does to living things.

What’s much more disappointing is that he’s taken VanderMeer’s cold, complex, powerful, and unnamed hero and not only given her a name, so as blandly to define her, but also reduced her to action-movie clichés: good with a gun and calm under pressure, but in love with her husband, and warm and friendly when she finally opens up. The scientists are strong women, for sure, which are always a welcome sight in a wide-release American film and would-be blockbuster. But most of them are also given basic backstories: one has lost a daughter; another cuts herself. Garland tries too hard to make these characters relatable in predictably “feminine” ways—as partners and caregivers, to themselves and others, which is to say, as specifically emotional beings—instead of just emphasizing through cinema their basic humanity.