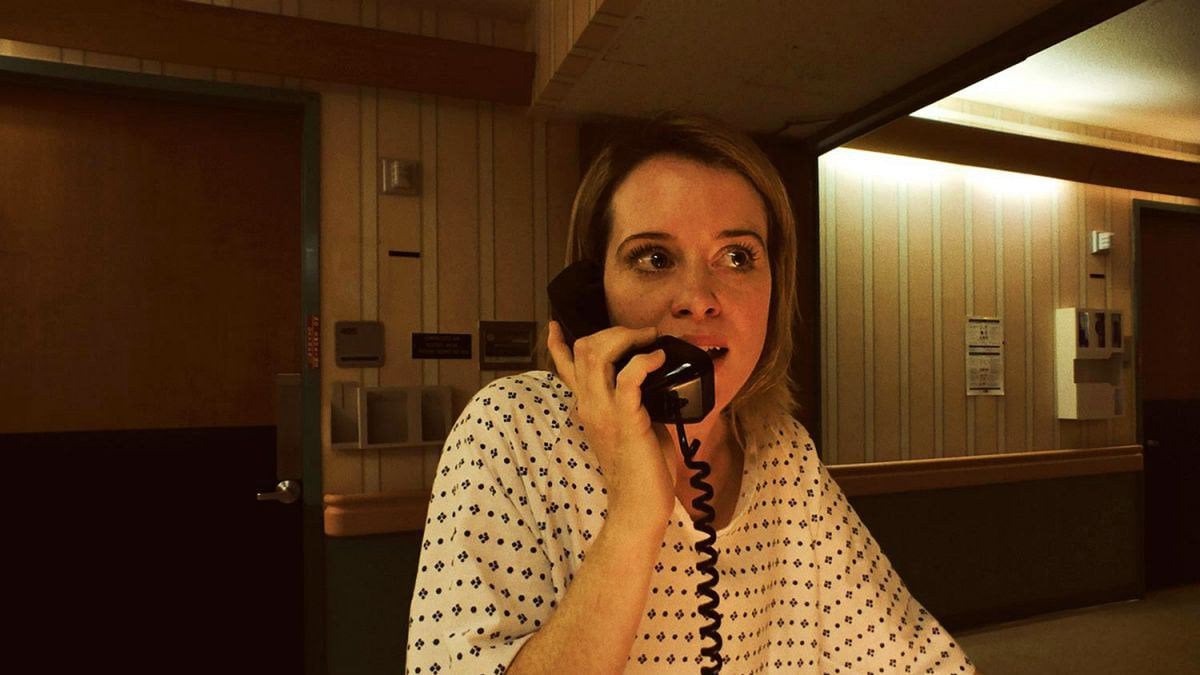 In 1959, Georges Franju’s masterpiece Head Against The Wall used a man’s confinement at a sanitarium as an analogy for the listlessness of French youth—a generation old enough to remember the degradations and traumas of World War II but now confronted with the promise of a passive, consumer-driven middle-class existence. Steven Soderbergh’s down-and-dirty Unsane functions in a similar way, using the experience of institutionalization to probe the mores around mental health in a privatization-mad America.

Having been the victim of a stalker, a twentysomething financial analyst, Sawyer Valentini (Claire Foy), seeks counseling at a treatment center in suburban Pennsylvania. While meeting with a therapist, she mentions having had thoughts of self-harm in the past, then fills out what appears to be a battery of routine paperwork—and suddenly finds herself committed against her will. Earlier in the film, Sawyer is introduced walking to her office, where she confidently tells an irate client that “Taking your frustration out on me will not alter the result”—a line that serves as foreshadowing, and a clue to the film’s fine-grained critique of contemporary American life.

Jonathan Bernstein and James Greer’s screenplay is concerned with the long-standing paradoxes of America’s heavily privatized mental health industry. The reasons for institutionalization are often at odds with helping patients, some of whom devise ways to “play along” in order to get out smoothly, then go on to resume unhealthy habits. Unsane proceeds from a real-life clause, commonly deployed, whereby you can be committed involuntarily if you’ve been identified as “a danger to yourself and others.” Hence, every attempt Sawyer makes to escape leads to stonewalling from the hospital staff, and defending herself against her genuinely crazy fellow inmates results in another strike on her record, extending the length of her custody.

One patient in treatment for opioid addiction, Nate (Jay Pharoah), recognizes Sawyer’s lucidity, and breaks down the commitment pipeline for her: “They got beds, you got insurance.” The last few decades’ mushrooming pool of part-time, easy-hire workers in the healthcare industry also doesn’t go unmissed by the filmmakers: Soon, Sawyer begins to suspect that her former stalker, David (Joshua Leonard), has infiltrated the facility posing as one of the staff under the name of “George Shaw” (as in the playwright of Pygmalion). But the film fudges the line between Sawyer’s constant anxiety, fueled by the pills she has to take and ignored by patients and aides alike, and the real possibility that David is closing in on her. It’s not much of a spoiler to say that her fear is confirmed within the first 40 minutes of Unsane, which then becomes something more lurid than suggested by the initially straightforward setup.

Beyond the aforementioned excoriation of legal loopholes and health care under neoliberalism—it’s not for nothing that Sawyer skips over the fine print of her intake forms—the story becomes a cat-and-mouse game within padded walls, closer to a 1970s giallo than an intimate psychodrama. Naturally, David’s unrequited obsession with Sawyer turns into something much darker. Just as Soderbergh detailed outbreaks of bad information across the internet in Contagion and the uncanny power of pharmaceutical lobbies in Side Effects, Unsane becomes a worst-case-scenario study in male possessiveness in our era of technological overkill. (“Think of your cellphone as the enemy,” says a detective to Sawyer in regard to how to streamline her life to avoid David.)

Throughout, Foy gamely inhabits all the freak-outs and breakdowns necessitated by a role like this. It’s revealed that Sawyer moved from Massachusetts to escape David, and while she must defend herself with balled fists and shrewd maneuvers, her actual damage from David’s obsession remains untreated—giving the story an undergirding, if underexplored, melancholy. A quick intervention from her bored, well-heeled boomer mom (Amy Irving) both materializes and is pacified in such a rush that it’s obviously plot stuffing for a third-act reveal that feels as entertaining as it does rushed, plunging Unsane further into midnight-movie terrain. The story itself seems confused about how seriously to take its subject matter: There are plenty of gross-out moments and clunky lines that border on the farcical, and David Wilder Savage’s lo-fi synth score sure doesn’t clarify where the film’s heart is.

All that said, few if any Hollywood-adjacent filmmakers have put as much brain power into making the digital revolution work for them as Soderbergh has (this is his 13th feature in the last decade, not counting 30-plus hours of auteur television), and even Unsane’s most ridiculous moments coast on the sheer energy of aesthetic gamesmanship. Shooting on an iPhone 7, the filmmaker continues finding economical solutions in a pinch: The film abounds in the same wide, skewed angles that filled Haywire and The Knick, though the low-fidelity, fuzzed-out shallowness of the iPhone’s depth of field allows Soderbergh to give the hospital a murky pixilation that perfectly matches Sawyer’s paranoid headspace (late scenes within the blue-vinyl walls of the solitary-confinement room approach the minimalism of black box theater). Soderbergh remains a major artist at the peak of his powers, fascinated by the textures of the contemporary world—the actual one, not the one we usually pay to see at the movies. Even if he’s just flexing a new mode of production, the result is still 98 minutes of shredding, analeptic cinema.