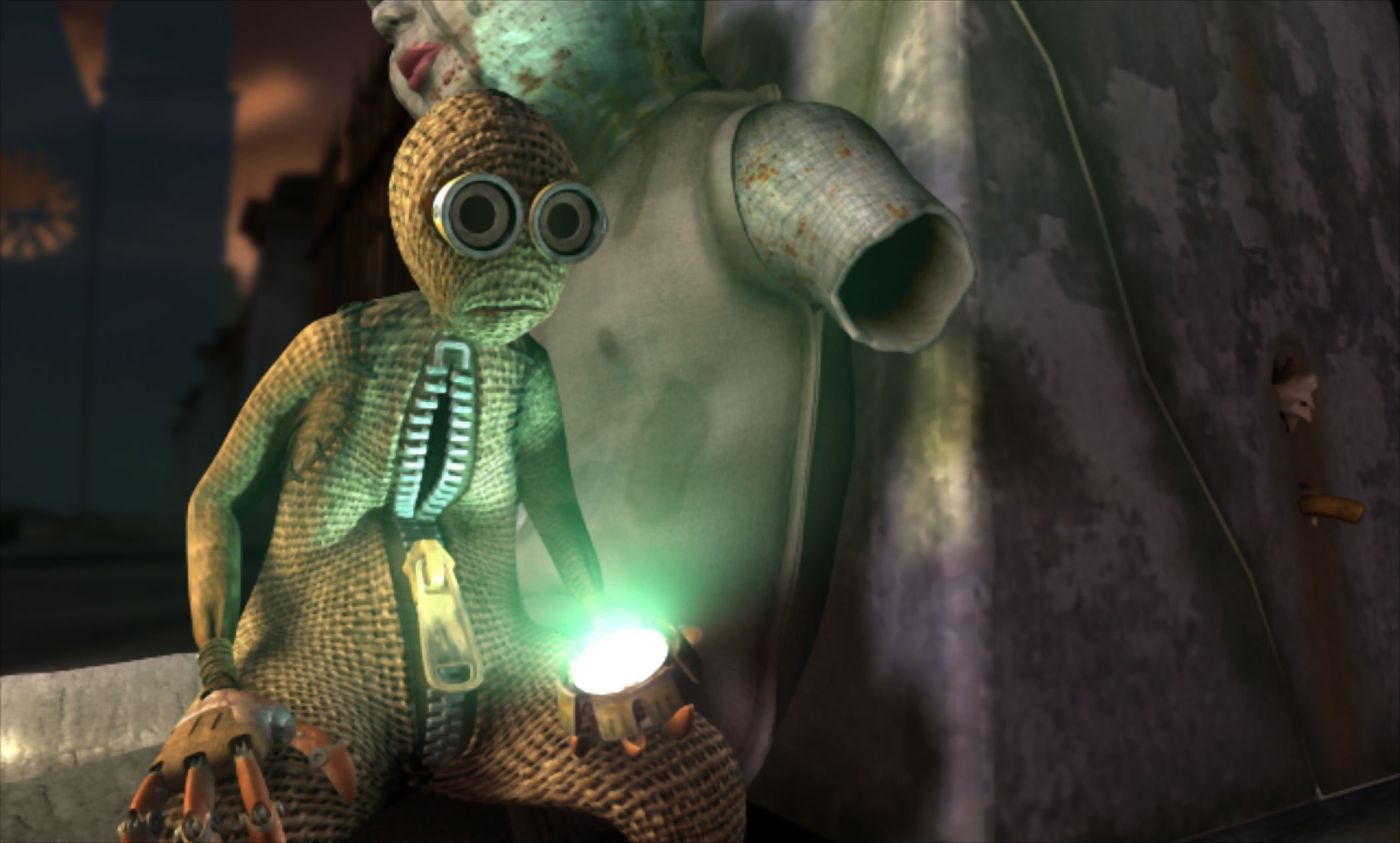 For all the effort that other animation studios expend in emulating Pixar’s success, most miss the fact that the studio’s writing is what often sets it apart. And while there’s an obvious quality to the writing in each of the studio’s ten films, we often lose perspective that the simplicity and generality of the stories are what make Pixar’s films so successful. It’s something that should be appreciated, as animation not only gives filmmakers the ability to take stories and push them into fantastical settings but also gives them the opportunity to use the visual medium as a way to express themes and emotions that aren’t apparent in the general scheme of a movie’s genre-specific boundaries. Pixar manages to balance the visual fireworks with the realization that even in the imaginative, fantastical settings that their animation style provides, there are always boundaries on how far a story can, and should stretch for its audience.

Shane Acker’s 9 is a movie that succeeds in a lot of ways but fails in this simple notion. The story it attempts to tell is one of epic scale, speaking on everything from war and industrialization to existential questions of the human soul and the peril of progress. And while 9 is at times a viscerally thrilling and gripping experience, the movie as a whole leaves you with almost too much to chew on, without ever fleshing out any of the ideas it tosses in the air.

The story begins with the introduction of the eponymous character, who appears to be a mechanical toy figure made of a burlap sack, zipper, and internal gears and mechanics (think Sackboy from Little Big Planet, if you’re a gamer). Awakening in a dark, abandoned house, he wanders outside to find the world in shambles. He soon meets others like him, though slightly varied in features, who go by the numbers of 1 through 8, all having distinct personalities and skillsets. They hide from mechanical beasts who roam the countryside, preying upon the only signs of life they can find. As 9 soon learns, the world was subject to a war between man and machine, due to the actions of a certain scientist whose efforts in creating artificially intelligent machines led to the rise of a machine army that decimated humanity. And as the movie goes on, it seems that the only lifeforms left on the planet are these nine toy figures, who are simply struggling to survive in hiding.

We’ll start with the things that 9 does right. The animation in this movie is stunning, to the point where you have to keep reminding yourself that you’re watching small toy figures fighting machines to emphasize the fact that the backgrounds and interactions with objects aren’t in fact filmed from actual setpieces. The palette of the movie stays rooted in a dark, abysmal tone, which both serves the backstory of the plot while reminding the viewer that this movie strives to be a stark, serious affair, little toys running around notwithstanding. And while the drab, dismal landscape risks losing your attention at times, the movie stays buoyed by the spectacular action sequences that Acker peppers throughout. At certain points during the fights, Acker directs the camera angles into some amazingly dynamic shots that truly take advantage of the angles and perspectives that reality would never be able to accommodate. Add on top of that, a gripping and fantastic score by Danny Elfman and Deborah Lurie. The movie succeeds in all the big, booming moments.

It’s unfortunate, then, that the movie is this enjoyable only during the action sequences. Acker’s screenplay is so much more than an action romp or an adventure flick, as the plotlines here deal specifically with big, important ideas, which the movie takes great pains to slow itself down to a plodding pace when it wants to start addressing them. This would be fine for any sort of reality-based drama, but in the case where you’re watching a group of small toys fighting with needles and matchsticks, having them talk about existential dilemmas or the dogmatic adherence to willful ignorance for self-preservation, it creates a weird dissonance in your mind.

It’s a shame, as there are some great ideas at play here swirling around between the fantastic action scenes and an overall stunning visual aesthetic. It just doesn’t ever click. Clocking in at 79 minutes, you begin to wonder if this movie would’ve played out better as something less fantastical, or more grounded in shades of reality. Or, in the alternative, something played more for a simpler, more basic storyline of good versus evil and general redemption that children could hold on to, and adults could appreciate amidst the other impressive elements it has going for itself.

Some may say that 9 was not meant for a simpler, more basic story, as the PG-13 rating shows. My question then remains: who is this for? It’s a dark, at times violent and frightening movie that addresses meaty issues that few children would be able to appreciate. And yet, it stars toys running around an apocalyptic wasteland battling steampunk, robotic beasts that no adult (without a firmly rooted love of animation) would ever be able to take seriously upon first glance. It’s a movie firing in every single direction, almost indiscriminately at times, showing off for everyone, which effectively means it’s showing off for no one.

It’s no surprise that this movie was developed from Acker’s 2005 short film of the same name, much like the way District 9 was developed from Neill Blomkamp’s short Alive in Joburg. But at least District 9 had the room to stretch its legs, given the hard R rating and superserious marketing that allowed an appropriate audience to find its way to the film. Here, Acker’s ideas would have been better focused on something lighter and more appealing to children, or something less marketed as a fantastical toy movie allowing the movie’s more mature themes to appeal towards an appropriately older, more thoughtful crowd (as of this review, the movie had only made back $28M of its $30M production budget after a month in theaters).

I don’t want to convey the idea that I didn’t like this film. At times, I enjoyed it greatly, and recognized the ideas it tried to execute. But in a world where animation is still largely panned by the close-minded adult audience, I yearn for films like 9 to succeed, with the appropriate marketing and studio backing allowing animated films like this to be both imaginative and profound. Acker’s stellar designs and vision are plainly apparent in this movie, but with 79 minutes to work with and a marketing scheme that looked like a Goosebumps book cover, there’s little surprise that this movie feels less than the sum of its parts, even if it’s not necessarily “unsuccessful.”

While we’re in the middle of Pixar week, as most writers are probably lauding the studio’s ability to reach for the stars, I want to take a step back and appreciate how reserved and contained they can be in executing their ideas, as fantastical as they may sometimes seem. Where WALL-E, for instance, could have been about so much more (environmentalism, folly of technology, our identity displayed in disposable artifacts), it remained a movie about love and connection, and that simplicity is what made it so easy to connect. In the case of Shane Acker’s 9, it reaches a few steps too far and suffers in the end. It could have been a movie about all the themes I’ve mentioned above, and it actually tries to touch on everything to some degree, shortchanging the smaller, simpler moments that could have made the beautifully conceptualized ending emotionally affecting.

Instead, it just seems rushed and forced. In the midst of studios pushing out animated movies at a record pace, we should be grateful that Shane Acker and Focus Features threw their hat in the ring with 9. More animated movies should strive to be this weighty and important, while retaining a certain amount of fun. And while 9 falls short in the end, we should be thankful that they are trying. But with all the emotion and thought that gets thrown around in here, sometimes it’s just more enjoyable and even more meaningful to watch a cute robot fall in love—because it’s simpler.