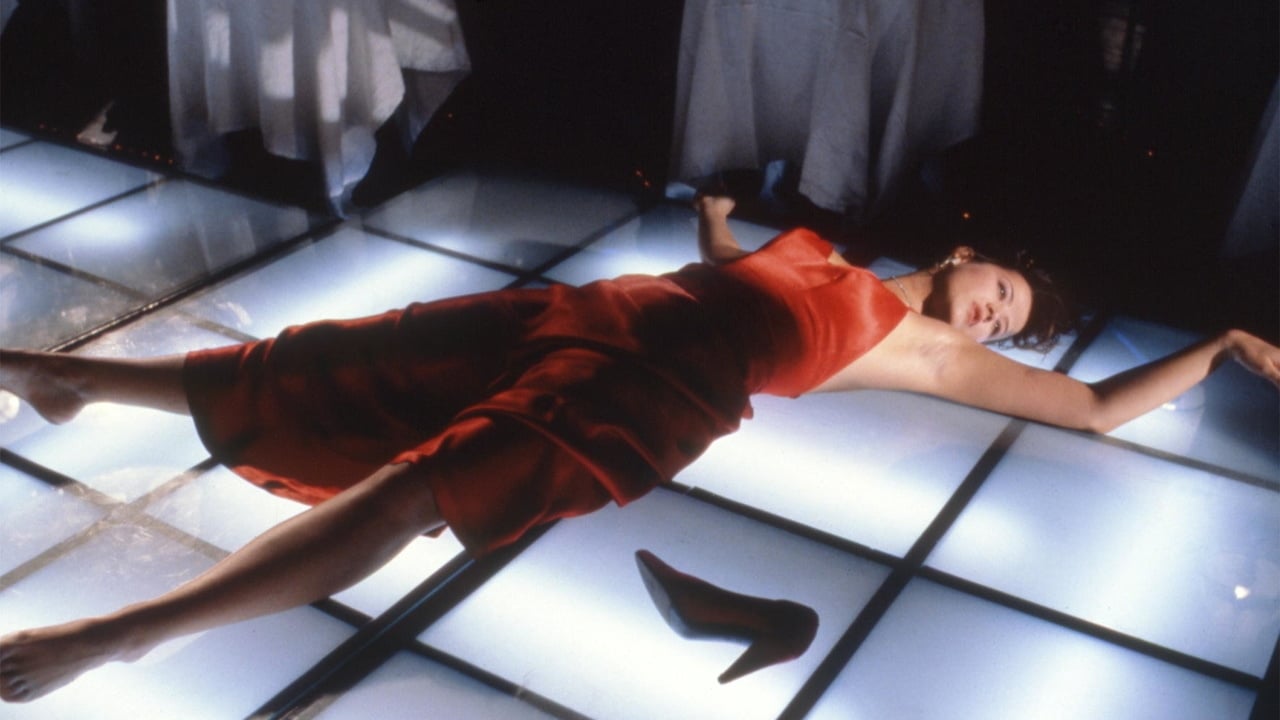 Andrzej Zulawski’s most lyrical movie to date, 1989’s My Nights Are More Beautiful Than Your Days, begins with a stroboscope frenzy of radiating colors, as computer programmer Lucas (Jacques Dutronc) watches garish x-rays of his brain and learns about his mysterious—and terminal—condition. As if in accordance with that rousing opening (scored to Andrzej Korzyński’s hypnotizing electro-throb), the movie itself is structured as a relentless series of emotional paroxysms. They’re all centered on Lucas’s strange relationship with Blanche, uneducated medium and fluent nightclub mind-reader, played by Sophie Marceau at her most radiant and cushy. Since she was Zulawski’s real-life partner from the time L’Amour Braque hit them both in 1984, and until their post-Fidelity break-up in 2001, it’s difficult not to approach My Nights as an autobiography of sorts. A story of a generationally mismatched couple feeding off each other’s powers and languages has a distinctive Pygmalion ring to it—an angle Zulawski often used when speaking about his relationship with the young Marceau. By the end of the film, Blanche is speaking in Lucas’s florid (and malady-affected) syntax, while the man regresses to an almost pre-verbal state of coarse directness (“That’s my word!,” Blanche cries out as she hears Lucas using one of her street-smart formulations). The astonishing central sex scene has as much to do with lovemaking as it does with mental dueling. Zulawski’s is a vision of a total irreconcilability of sexes and classes—as galvanizing as it is sad and stifling.

Possession is the ultimate bad-breakup flick, “a film-shaped virus” (per Simon Abrams), featuring Isabelle Adjani humping the air around her, as well as a tentacle-rich monster humping her in turn. Whatever angle you take, the film remains both Andrzej Zulawski’s masterpiece and one of world cinema’s supreme art-house whatizits. Shot in 1981 in divided Berlin, Possession not only makes a conspicuous use of the fateful wall in its opening shots, but is actually all about division, parting ways, and cutting lives in half. As if to mirror the city’s torn geography, the central couple (played by Adjani and the harrowing Sam Neill) breaks up in the very first scene. What starts as a civil separation quickly turns into a series of shouting matches, acts of violence, self-mutilation, and…to say anything more would mean to betray the film’s reliance on elements of shock and surprise.

Adjani’s fearless, utterly physical performance earned her an acting award at Cannes, and her uninhibited subway-passage fit is one of the all-time marvels of cine-shamanism. By Zulawski’s own admission, the film was inspired by his real-life breakup with the star of his first two movies, Małgorzata Braunek, and is about the nature of evil and communism, which—in the world of Possession—means the same thing. As Adjani’s Eastern-immigrant doppelganger says at one point: “I come from a world where evil is palpable and easy to name; it’s simply there, walking the streets.” In the context of that confession (written into the script by the director twice kicked out of his country for political reasons), the film’s famous coital scene grants an entirely new spin to the phrase I Married a Monster from Outer Space, which, if one takes J. Hoberman’s hint, could almost serve as Possession’s alternative title.

Ivan the Terrible is dead, long live…Boris Godounov? Or was it the False Dmitry…? Take your pick, as Andrzej Zulawski stages Modest Mussorgsky’s opera of the blood-bathed 17th-century Russia power struggle, based on a Pushkin poem and embellished with all the grandeur befitting Ruggero Raimondi’s miles-deep bass voice. The ill-fated 1989 film was first embraced and then cursed by the legendary Mstislav Rostropovich, who—after having conducted the full score—not only inscribed his ire into the opening disclaimer, but also did much to prevent the movie’s wide availability (he actually sued Zulawski for “the violation of the Russian soul,” which he then failed to define in court). Despite the chaotic first movement (you better brush up your tsars prior to the screening), Boris Godounov quickly gains momentum and makes splendid use of Zulawski’s elaborate structure of choice: We are watching a theater performance embedded into a movie about making a movie—and so on. Gliding cameras and members of the crew mingle casually with the singers. Impressive in its use of whirling camera movements as well as mega close-ups of the contracted faces of its singers, Boris Godounov is one of the most original opera movies ever made, as well as one of the hardest to track down and watch. It may be that this, in fact, is the BAM retrospective’s most inconspicuously rare gem.

Frederick Chopin’s music was once described as being capable of embracing tidal waves of sadness and joy at the same time, and the same can be said of Andrzej Zulawski’s sorta Chopin biopic, 1991’s Blue Note, which focuses on the composer’s 1846 country holiday, during which he has to deal with his flailing health, his strained relationship with the famed writer and feminist George Sand, as well as her daughter Solange’s budding erotic interests. Given that Zulawski himself—very much like Chopin—has been a Polish expat living in France and involved with its cinema’s prime star (Sophie Marceau, playing Solange), there are many autobiographical traits in this rich and complex story of how 19th-century European intellectuals lived and imagined the change to come. (The all-star list of prominent characters includes Ivan Turgenev and Eugene Delacroix.) The movie’s most singular stroke of originality lies in the casting of first-time actor and star pianist Janusz Olejniczak in the role of Chopin. Zulawski was aiming for a veritable merging of the character and the performer; by his own admission, his biggest dream was to make a film in which the leading actor sits down by the piano and actually plays it like a master (“I didn’t want any of those fake cutaways to disembodied hands fluttering this way and that over the keyboard,” as he told Piotr Kletowski and Piotr Marecki in their mammoth 2008 book-interview). Apart from its real-life characters, the film sports an almost equally large cast of sprightly ghosts and dyed-gauze-clad phantoms, strutting about among the living as if it was the latter who invaded upon their world.

Undoubtedly the tamest entry in Andrzej Zulawski’s oeuvre (as well as the unrecognized masterpiece to both accompany and complement Possession), 2000’s Fidelity remains the director’s final film work to date (he has since published several novels, bringing the total count of his literary works to an impressive number of 25). Based on the 17th-century novel by Madame de La Fayette, the movie updates its highly moral tale of a woman’s refusal to cheat on her stately husband with a highly alluring young man, and places is in the world of modern photography. As Clélia (Sophie Marceau) is fidgeting between the world of high art she’s devoted to and the paycheck-providing universe of tabloid sensationalism, she’s trying to resist the low-life sexual charm of a paparazzi colleague, whose body is adorned in a barbed-wire tattoo that mirrors his aching desire. Despite its modern-day parallel-reality Paris setting (“Fidel Castro est mort!,” cries one of the headlines), Fidelity makes beautiful use of La Fayette’s courtly language and careful character development, a strategy which yields truly explosive effects when merged with Zulawski’s unruly sensibility. Forever fascinated by the contrast between the high and the low, the director meshes together disparate elements: The life of the super-rich is boldly juxtaposed with the shady demimonde of sleazy dogfights, ritualistic motorbike racing, and illicit organ trafficking (signature Zulawski image: a pair of freshly scooped-out human eyes resting in a frozen aluminum box). Compared to the secretion-oozing nuttiness of Possession, Fidelity is a work of almost touching delicacy and quiet desperation. In hindsight, it can be seen as Zulawski’s letter of farewell to Marceau; the couple broke up soon after making of the film, thus ending a relationship of more than 15 years and inadvertently delivering a melancholy coda to their final shared work itself.