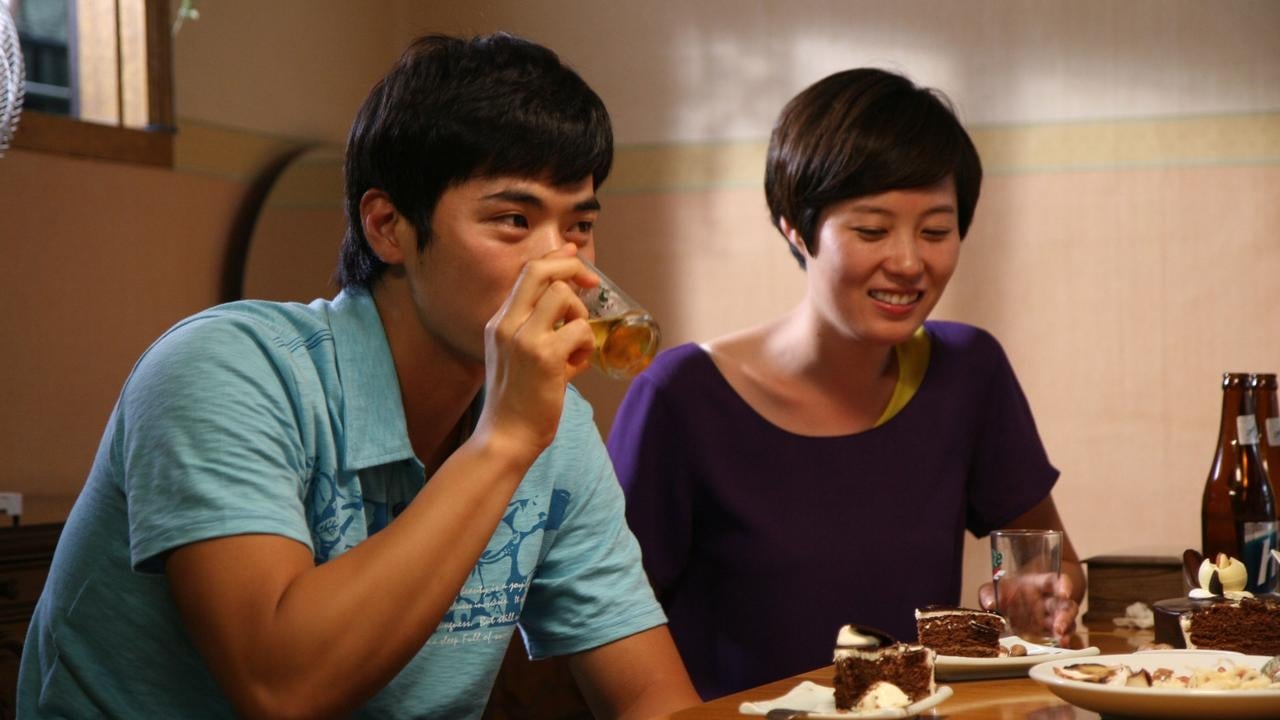 With Hahaha and Oki’s Movie, the AFI Fest presented two very different cinematic avenues of interest for prolific South Korean filmmaker Hong Sang-soo. While both films are stylistically and narratively audacious, they couldn’t be more different in tone. Hahaha is expectedly a comedy, but one about exterior human facades and the varying reasons we laugh to cover up the pain of romantic entanglements and outright discomfort. With this theme in mind, Hong traces the incomplete and overlapping memories of two young men, old friends sharing recent experiences over an afternoon of heavy drinking.

Jo Munkyung is a fledgling filmmaker returning home to his mother before departing to Canada, while his film critic friend Bang Jungshik’s adulterous behavior is complicating an already fragile family dynamic. Their initial conversations are expressed entirely though voiceover, visually structured by black-and-white still photographs acting as sly chapter headings for the unfolding flashbacks. It’s a wonderful structuring flourish, and Hong ends each vignette with the men raising their glasses for another toast. “A sip for a memory,” one of them says, punctuating the idea that no matter how painful the past, friendly reflection helps muddy the underlining heartache of reality.

Hahaha sees romantic errors, flights of fancy, and social taboos as defining attributes for meals between friends and walks in the rain, small moments shared between characters yearning for relief from life’s little daggers. Despite the emotional battering each character takes, Hong always affords these sometimes pathetic men hope. In the film’s most revealing scene, a fascinating dream sequence between Munkyung and a famous historical Korean personage named Admiral Yi, the traditionally garbed ghost reminds the disillusioned man, “You just have to keep going.” Past history it seems, can always creep back into your consciousness and guide you toward somewhere more enlightening. As the two overlook a deep valley of green forest and gray sky, their elliptical, dreamscape conversation makes it clear that the burdens and disappointments of life experience are part of what makes the process so worthwhile.

Far more challenging and less fulfilling is Oki’s Movie, which finds Hong in super-conceptual mode. Through a series of vignettes that keep moving backward in time as the narrative progresses, Hong coldly addresses the increasingly fragile love triangle between two film students and their professor. The flashback structure challenges the core notion of emotional development, never allowing the characters or audience to find a solid footing in any one conversation or emotion. Expectations about art, love, and sex are constantly fluid, uncomfortable, and ultimately entirely dependent on the camera’s subjectivity. The airy, whimsical feel of Hahaha is completely absent, replaced by a stark, smooth blue aesthetic that allows the emotions and regrets of its charters to slide off the frame. “The form will take you to the truth,” the film professor says to one disciple, accentuating a thesis Hong both subverts and celebrates with this very cerebral text.

The repetition of names, events, and experiences become the core element of Oki’s Movie, coming to a head with the final section where the titular Oki juxtaposes the same long walk up a mountain with two very different suitors. What becomes crucial, even dynamic from this final functioning memory are the subtle differences Oki notices in regards to both character and place. Her voiceover during this segment is astoundingly frank, basically admitting the purpose of hers and Hong’s movie is to simply address the ramifications of the juxtaposition and not judge the end result. This omniscient approach to tweaking love’s puppet strings may be the one way Oki’s Movie and Hahaha overlap. No matter the form or function, Hong’s auteurist struggle is with modern emotional panic, and the many ways we react whether drenched in laughter or self-pity.

Bruce Conner: The Art of Montage