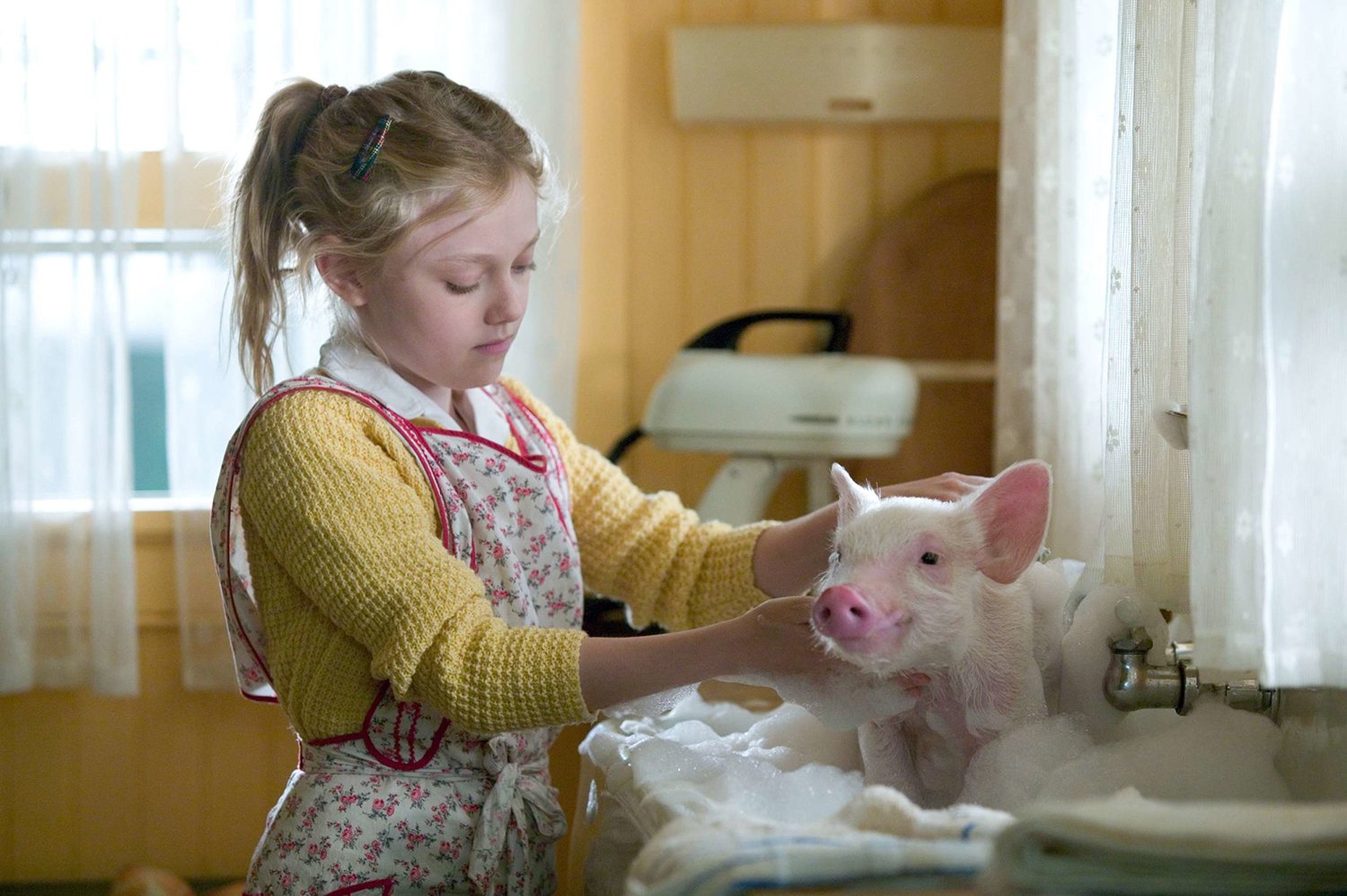 To say that the new film version of Charlotte’s Web doesn’t dishonor its source sounds like a backhanded compliment, but it’s actually the highest praise. E.B. White’s novel has survived not just because of its charming premise, cleanly-drawn characters and hints of allegory, but because it’s a perfect book. Every paragraph, sentence and word pulls its weight. Like the title object, it’s a functional work of art. So is Gary Winick’s film version, which casts Dakota Fanning as Fern, the precocious farm girl who assumes responsibility for a doomed runt pig (voiced by Dominic Scott Kay), then watches in astonishment as the pig becomes a curiosity, a celebrity and then an object of quasi-worship, thanks to the selfless devotion of Charlotte the word-embroidering spider. Like the book, Winick’s movie is as solid and cleanly rendered as a Greek sculpture. It doesn’t advance the art of cinema, nor does it mean to, but it does something just as rare: it stands up for true classicism. It’s not a subversive/self-aware quote-mark-enclosed film school homage to prewar Hollywood; it’s a 21st century movie so economical yet satisfying that it seems to have been ghost-directed by William Wyler or Walt Disney in about 1939.

The script, credited to Karey Kirkpatrick and Erin Brokovich writer Susannah Grant, doesn’t just cherry-pick White’s most memorable lines, it leans very heavily on his narration, read here by Sam Shepard—a gutsy move, considering how many of White’s passages are etched in our collective memory. (“It is not often someone comes along that’s a true friend and good writer. Charlotte was both.”) Winick—whose borderline-inept Tadpoleand serviceable but slight 13 Going on 30 gave no inkling of his potential—rises to the screenplay’s challenge and then some. In its own probably incidental way, Charlotte’s Web has more to say about the sources of old movie magic than any number of blockbuster remakes and art-house rethinks. (It’s an independent film, by the way, funded by Walden Media—the family entertaiment production house that backed The Chronicles of Narnia: The Lion, the Witch and the Wardrobe—and then picked up by Paramount.) It’s not a straight-up computer-animated movie, nor does it foreground animatronic puppetry (as the Babe films did). Instead, it’s a live action picture that uses special effects sparingly and tactically (to make real animals’ mouths sync up with their dialogue, for instance, or to match a real animal with a digital double for some stuntwork). The effects never call attention to themselves as effects; aside from the obvious unreality of talking mammals and birds, the creatures move more or less as real creatures would—an approach that gives the whole enterprise a matter-of-fact magic. The movie’s compositions, cuts, hues and textures are similarly in tune with old movie values. Seamus McGarvey’s cinematography makes the colors pop in the manner of a mid-50s Technicolor drama (bright but not garish, rich but not showily lush), and there’s no visible grain, not even in dark shots. Winick and McGarvey’s visual grammar favors locked-down closeups, crane shots and dolly shots, eschewing zooms, handheld camerawork and other visual signatures that came into vogue in the second half of the 20th century. Susan Littenburg and Sabrina Plisco’s editing holds individual shots held just long enough to clarify a point or fix a reaction, never lingering or prematurely jumping away—the cutter’s equivalent of writing with a minimum of adjectives. These factors subconsciously convey solidity and permanence—qualities that also describe White’s prose.

The performances are conceived in the same spirit. Winick’s absurdly overqualified voice-over cast—Julia Roberts as Charlotte, John Cleese as Samuel the Sheep, Cedric the Entertainer and Oprah Winfrey as Gussy and Golly Goose, Kathy Bates as Bitsy the Cow, Robert Redford as Ike the Horse, and so on—functions as a laid-back democratic ensemble, serving the scene and the story rather than upstaging them. When a performer shines, it’s through precise character work. Roberts, for instance, has never had a role that makes better use of her to-the-manor-born confidence and opacity. What seems like icy vagueness in other roles—Closer, for example, or Ocean’s 11 and 12—plays here as craftiness, parental warmth and centered, depthless spirituality; these traits are just right for Charlotte, a mix of ubermom, movie star, Christ figure and eight-legged PR agent. Steve Buscemi’s Templeton the Rat is miles away from Paul Lynde’s rendition in the 1973 Hanna-Barbera cartoon musical(an OK movie, but one that’ll vanish from your memory as soon as you see this version). Buscemi deadpans the rodent’s scalawag self-interest in a manner that recalls his underrated star turn in his self-directed Trees Lounge. Buscemi’s devotion to psychological plausibility pays off late in the film when Templeton realizes he’s developing a conscience, and is startled, appalled, intrigued and finally excited. This sequence of feelings would be tough to sell if Buscemi were playing a human; yet here, with his voice issuing from a CGI-tricked-out rodent, it’s not just convincing, it’s moving. (“You’re very kind,” Charlotte tells him. “Don’t go spreading it around,” he replies.) The human stars acquit themselves just as honorably; first among equals is Fanning, whose beyond-her-years gravity and eerie focus read as righteous fervor. Moreso than in the 1973 film, you get the sense that Fern isn’t just a kid taking pity on a pig, but a potential adult who’s taking a stand based on an innate moral code (centered on empathy for the condemned, maligned and exploited) that will be perfected over time. This film about barnyard animals is the most humanistic blockbuster of 2006. It’s humble and radiant.